Current dividend yields really aren't that impressive when compared to historical average yields. As of Monday's close, the S&P 500's yield sat at just 1.9% compared to its historic average, dating back to 1870, of roughly 4.4%. This means investors have to be particularly careful with the dividend stocks they buy because some dividend checks simply aren't worth the paper they're printed on.

This challenge is only multiplied in the healthcare sector where dividends in general are more scarce. Today, we'll take a closer look at one of those dividend stocks, Zimmer Holdings (NYSE: ZMH), and look at whether this provider of orthopedic and surgical implants is worth income-seekers' time or if they should move on to more fruitful investment ideas.

Let's start with the basics by examining how the company fared in its latest quarterly announcement.

Zimmer, which reported its second-quarter results about four weeks ago, delivered an increase in net sales of 1.2% to $1.18 billion as its adjusted profit per share inched higher by 4.2% to $1.49. Overall, Zimmer saw strong growth from Europe with knee-procedure revenue rising 13% year-over-year and global trauma revenue up 7%. Working against the company was a 4% contraction in spine product revenue and a 10% dip in surgical sales during the quarter.

There are a couple of notable catalysts which stand out as attractive for long-term oriented investors in Zimmer.

To begin with, an aging population should increase the need for orthopedic procedures and surgical implants. With baby boomers beginning to retire and life expectancy in the U.S. on the rise, the expectation is that retirees will lean on advances in orthopedic and surgical technology to remain more active and have a better quality of life.

Perhaps even more intriguing is the potential that the Affordable Care Act might play. The ACA, perhaps known best as Obamacare, is a sweeping healthcare reform law that's quickly reducing the number of uninsured Americans in this country. Since the actionable component of the ACA, known as the individual mandate, requires people to purchase insurance, the thought process is that newly insured individuals will be more inclined to visit their doctor for preventative care. These visits could lead to a number of preventative surgical procedures designed to improve patient mobility, playing right into Zimmer's hands.

Another catalyst is the company's announced buyout of Biomet in April for $13.35 billion. The deal is expected to net Zimmer an even larger slice of the musculoskeletal market, making it the second-largest seller of orthopedic products behind only Johnson & Johnson. Not only is the buyout expected to result in cost synergies for the two companies, but being larger should give Zimmer better pricing clout when negotiating with hospitals and insurers.

Lastly, there's plenty of opportunity to grow in ex.-U.S. markets, specifically in Asia. Many U.S.-based medical device makers have only hit the tip of the iceberg when it comes to expanding overseas, and Zimmer is no different. With emerging market economies growing at a brisk pace, they could represent a nice source of geographic diversity for Zimmer.

As we know, there is no such thing as the perfect stock. Here are some headwinds which could work against Zimmer.

First and foremost, despite improving patient quality of life the orthopedic market is highly competitive and pricing is cutthroat. This can keep pressuring margins, reducing company profit.

Secondly, benefits from the ACA are incredibly hard to predict. While an increase in preventative doctor visits has long been expected, the reality thus far is that consumers are holding back on having a number of surgical procedures done, such as knee and hip replacements. These surgeries are costly, and even with insurance consumers simply haven't wanted to fork over their out-of-pocket cost with Obamacare premiums for 2015 still largely a question mark.

Additionally, the ACA also imposes a medical device excise tax of 2.3% on Zimmer and other device makers. It leaves device makers with less capital to reinvest in research and development, as well as funnel to investors.

Is this dividend stock worth your time?

Now that you have some idea of the growth drivers and headwinds of the business, let's take a look at what shareholders would get on an annual basis by buying into Zimmer. 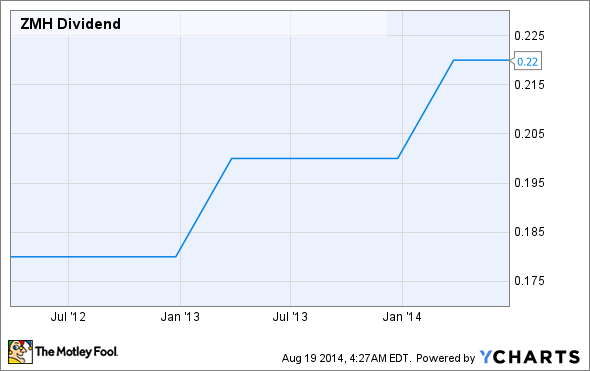 Now it's time to answer our initial question: Is this healthcare dividend stock worth your time?

Based on its current outlook and yield I'm going to take what I suspect will be an unpopular opinion and say "No."

My reasoning rests primarily with the high level of competition in the orthopedic space. Zimmer's annual gross margin has been on a general downward trend since 2006, from 77.7% to just 72.4% last year. And operating margin has declined from 33.4% to 28.3% over the same period. There is the possibility that Biomet could help reverse this downtrend, but the integration of these two behemoths is going to take time. Translation: margin improvement likely won't be apparent until 2016 at the earliest in my opinion.

Also, Zimmer's payout ratio leaves a lot to be desired. It's perhaps a bit understandable why the company kept its payouts so low if it was eyeing an acquisition all along, but there are a handful of other medical device names that investors can consider which offer far more attractive organic growth rates and pay out a larger percentage of their earnings on an annual basis.

You could certainly do a lot worse than Zimmer, but as a dividend stock I'd give this one a pass.

Is This Dividend Stock Worth Your Time? @themotleyfool #stocks Next Article
Current