In Tesla's (NASDAQ:TSLA) second quarter, the story remained the same. Demand for its all-electric Model S continued to outstrip supply. In fact, Tesla said total demand is growing faster than total supply. And with the Model X SUV just around the corner, which Tesla expects to eventually outsell the Model S, this trend doesn't look poised to change. Fortunately, Tesla has a plan: Gigafactory, to the rescue!

The battery for Tesla's vehicles is built into the floor of the car. With the Gigafactory, Tesla wants to streamline the production of lithium-ion batteries, cut costs, and build at a scale that exceeds total global lithium-ion production levels in 2013. Image source: Tesla Motors.

Even as Tesla breaks ground on the Gigafactory in Reno, Nev., and simultaneously continues to court other states as a potential home to the $4 billion-$5 billion project, the battery factory continues to have its doubters -- particularly related to Tesla's aspirations to scale battery production enough to profitably market vehicles to the mass market.

A closer look at some comments from Tesla, however, shows why battery cost cuts due to the Gigafactory may be more of a sure thing than a lofty goal.

Is a 30% cost cut really possible?
While it's clear that the Gigafactory can help Tesla meet demand for the Model S and the Model X, there is less certainty about whether or not the company will truly be able to successfully and profitably tap into the Gigafactory to support sales of its Model 3, which will sell at half the price. The biggest concern: Can Tesla really cut lithium-ion costs by 30% with the Gigafactory?

Understanding the potential of Tesla's Gigafactory begins by getting one important item, which management has repeatedly emphasized, correct. Thirty percent is not the ultimate goal of lithium-ion cost cuts. Instead, it is the bare minimum that Tesla expects to achieve with the Gigafactory in the first year of Model 3 production.

When Tesla first announced the Gigafactory, it clearly stated in its plans that it expected that battery pack cost per kilowatt hour would be greater than 30% by Model 3 volume ramp in 2017. 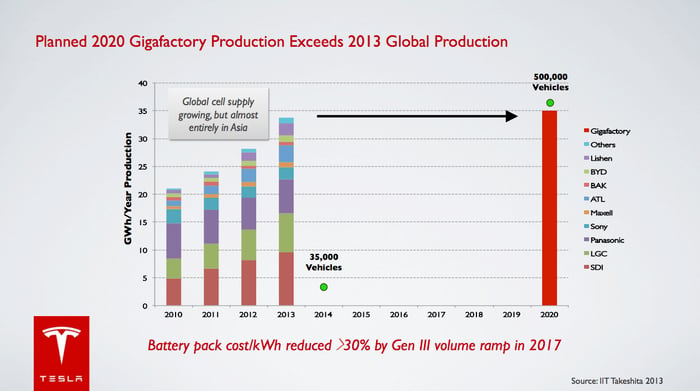 Perhaps, however, Tesla is just blindly leading us on? This could have been an argument until Panasonic (arguably more knowledgeable and experienced regarding lithium-ion production than any company in the world) admitted that a 30% reduction by 2017 was, indeed, a conservative prediction. And Panasonic is now putting its money where its mouth is, announcing a deal to partner with Tesla in the Gigafactory in July. Panasonic's investment is considerable; during Tesla's second-quarter conference call, CEO Elon Musk said that he expects Panasonic to invest as much as $1.2 billion-$1.6 billion of the $4 billion the company expects to spend on the factory by 2020.

Surprising confidence
Not only does Tesla view 30% cost cuts to its batteries as conservative, but Musk said during the second-quarter call that he would be "disappointed if it took us 10 years to get to $100 a kilowatt-hour pack." Since Tesla hasn't shared exactly where its costs are today, it isn't clear what percentage of a cut that $100 per kilowatt hour is to today's cost, but as Deutsche Bank analyst Rod Lache noted during the call, it is low enough for Tesla's electric vehicles to reach cost parity with -- and possibly even improve upon -- the cost of an internal combustion vehicle.

The dialogue that followed Musk's bold prediction during the call showed just how sure Tesla is in the future cost cuts of lithium-ion batteries.

But Musk disagreed: "Seems pretty obvious to me."

Tesla chief technology officer JB Straubel chimed in, explaining that even though company is tracking potential breakthrough chemistries for lithium-ion batteries, even these aren't factored in to the path that Tesla sees to reduce its battery costs enough to economically produce mass-market, fully electric vehicles.

Tesla's Model S, with a starting price close to $70,000, isn't affordable for most U.S. citizens.

"But to get to -- to realize the Giga Factory and those cost targets, we don't need some fundamental breakthrough in chemistry and material science. Those things are pretty well understood in front of us," Straubel said.

So, not only does Tesla expect to exceed a 30% cost reduction during the first year of production for the Model 3 in 2017, but it also is baking in plenty of conservatism in this forecast. In other words, Tesla believes it isn't shooting for the moon with the Model 3 and that, instead, this mass-market vehicle is completely realistic.

Of course, there is still room for doubting. But Tesla and Panasonic's growing confidence certainly makes a good case for the enormous potential of the Gigafactory.