Concentrated solar thermal technology has been in the headlines recently, but this solar technology may already be on its last leg.

When critics of solar energy talk about the downsides of the clean energy, one of the criticisms that always pops up is the intermittent nature of solar power. The sun only shines for 12 hours a day on average around the world, and the most energy intensive time is far shorter than that.

So, it's easy to see why a technology like concentrated solar thermal power could be appealing to industry observers. Designs like power towers or parabolic trough designs concentrate the sun's energy on a point that then heats oil or another liquid, creates steam, and then turns a turbine to generate electricity. The energy can even be stored in molten salt to provide power into the evening hours.

But there's a big reason concentrated solar thermal technology won't be more than a small player in the market, and it's not the birds these plants are reportedly scorching mid-air.

It's on this basis that concentrated solar thermal energy was at or near the industry lead in 2008 when these plants were popular and power purchase agreements were around 21 cents per kW-hr, according to the DOE. But today they're not economically competitive; former leaders like Solar Millennium are going bankrupt, and projects like BrightSource Energy Hidden Hills and Palen projects are cancelled or delayed.

For a cost example, the Ivanpah Solar Electric Generating System that was recently completed began construction at a similar time to First Solar's (FSLR -0.28%) Topaz Solar Farm and, as you can see below, cost 29% more per watt.

The table above is even showing a favorable comparison for solar thermal energy because these projects were both approved years ago. Since then, the solar industry has seen panel costs fall over 50%, and according to GTM Research the cost to install a utility scale system is down 61%. We're even starting to see power purchase agreements fall below 7 cents per kW-hr, with PV technology winning those bids. 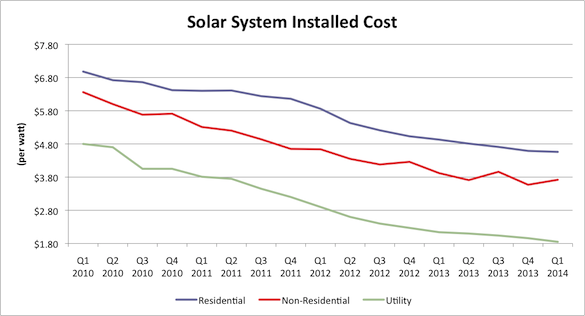 There aren't many concentrator projects that have begun construction or even moved forward in the planning phase in the last two years, so it's difficult to give an apple-to-apples cost comparison today. But I would bet that the cost of mirrors, turbines, and molten salt for energy storage hasn't fallen at the same rate as thin-film or silicon based solar systems. That's the core problem for concentrated solar thermal technology.

Small solar installations on residential rooftops are a big part of the industry's future. Source: SolarCity.

Fighting industry trends
Cost isn't the only uphill battle for concentrated solar thermal. To build a solar thermal power plant you need to think big. These are plants you build on hundreds or thousands of acres in the desert, not something you can put up in your backyard.

That's fighting the solar industry's trend of moving closer to the demand source with smaller projects, even for utility scale projects. Systems between 10 MW and 50 MW are now a sweet spot because they can be built relatively close to demand sources with standardized designs and are easier to get through the permitting process.

So, not only is concentrated solar thermal energy higher cost than traditional PV solar, it's becoming hard to justify plants that are on the scale of 500 MW, no matter the solar technology.

Intermittent solar won't kill the grid
If you still think there's immense value in the less intermittent design of concentrated solar thermal plants, there's one region that shows that intermittent energy sources won't cause the grid to collapse.

Germany is the closest thing we have to a solar focused electric grid, so it's like a proving ground for the industry. The country is a leader in both PV solar and wind, which are both intermittent. In the first half of 2014, the country got 28.5% of its energy from renewable sources and as much as 75% of peak demand is now being filled by renewables.

The surprising thing is that with all of that renewable energy, Germany also has one of the most reliable grids in the world. The average German customer had 15.9 minutes of lost power according to recent data compared to 244 minutes in the U.S. So, having intermittent energy sources like solar won't kill the grid.