So what's the difference between the investment thesis for BP and the rest of its integrated oil and gas compatriots? Not a whole lot. All of these companies are long-term bets that the demand for oil and gas will not be significantly disrupted for many years to come despite the rise in alternative energy. The one thing that does distinguish BP from its peers, though, is that it is emerging from a complete operational turnaround following the Macondo well blowout, and the newer, sleeker company could be a much better performer than BP's previous self.

Is it worth picking BP over the rest thanks to this turnaround? Let's take a look at how it compares to its peers and how it measures up from a valuation perspective.

BP's case that it's the best of the bunch

I'm not going to lie to you: From an operational standpoint, it just doesn't stack up compared to its peers. By just about every measure of operational performance -- net income margin, return on capital, free cash flow, etc. -- there is at least one company that is ahead of BP. Much of that underperformance can be attributed to the fallout from the Macondo well blowout and the subsequent sell-off of assets. This has also resulted in a decline in overall production as well as refining and chemical manufacturing capacity.

However, there are signs that the company is on the upswing. BP's management isn't trying to fool anyone, it knows that investors look to BP for a long-term investment that throws off a strong dividend. In order to do this, it is focusing its operations around building a sustainable cash flow to fund its dividend and even throw some extra cash back to shareholders in the form of buybacks or special dividends. 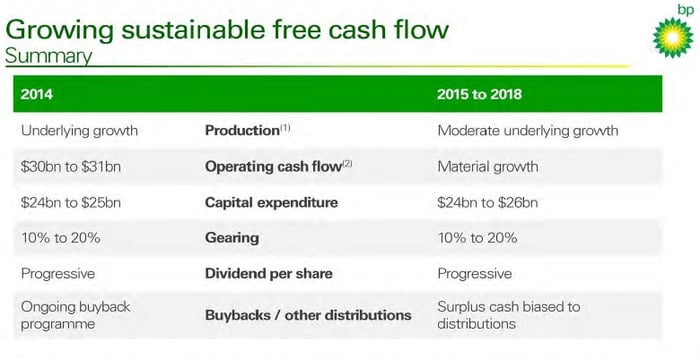 Even more promising, though, is that it appears this plan is working. Despite the fact that the company is now working from a smaller asset base, it has been able to generate operational cash flows that are 50% greater than 2011. 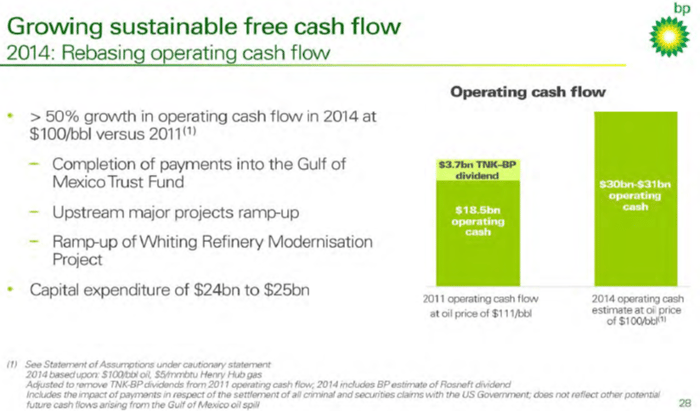 Furthermore, BP has been the only company in the space that has actually seen cash in excess of capital expenditures and dividends increase as well as see an increase in return on capital in the past several years. If it can maintain this pace, it could actually become the best performing integrated oil and gas company with regards to return on capital employed. 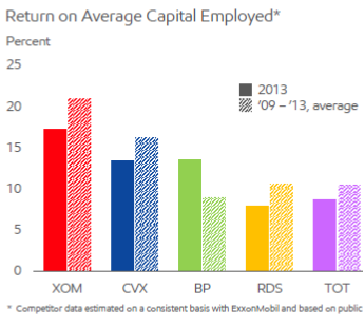 So over the next couple of years, don't be surprised if earnings growth at BP is modest at best, because it is much less important to BP than to provide shareholders with cash. If you are looking for an income investment, BP is trying to make the case that it should be the one you pick.

Before you fall out of your chair at BP's price to earnings ratio, which is about half of the Robert Schiller P/E Ratio for the S&P 500, keep in mind that the energy industry has historically been priced at a significant discount to the broader market. At last check, the Schiller P/E ratio for the energy sector sits at about 15.9 while the S&P 500 is around 26. The reason for this is because energy companies like BP are inherently cyclical and performance will vary greatly based on oil price. So when you see that BP and the rest of its Big Oil peers are all trading well below the market average, don't be surprised.

One thing that really stands out here is that even though BP seems to be valued at a relatively similar level to its peers as far as price to earnings ratio and enterprise value to EBITDA, it is relatively undervalued when compared to the others on an enterprise value to total revenue basis. The most likely reason for this is that BP has the lowest net income margins among the integrated oil and gas companies, so its revenue is less valuable than the rest.

The one surprising thing about these lower than industry average numbers is that if you look at the historical valuation metrics for BP, it's not as under valued as the numbers might imply. Sure, shares of BP are trading lower than their 10 historical averages for revenue and EBITDA, but again, the company has seen its margins slip considerably over that time. Probably the most telling metric here is its price to earnings ratio, because based on this BP's shares are actually trading at a slight premium.

If you are thinking about buying shares of BP, then I hope that you are doing it as an income investment. Its 4.4% dividend yield is very compelling, and the moves the company has made recently suggest that it will be able to maintain that dividend for some time. Granted, the company has struggled a bit over the past several years, but if it can maintain its focus on cash generation it should be a much more compelling investment in the future. At the same time, it's not as though the company is trading at any significant discount to its historical averages, so you're not getting the company at bargain basement prices like some investors may have following the Macondo blowout.

If forced to make a decision on buying shares of BP, I would probably decline and look at peers such as Chevron or ExxonMobil because they both seem to be on track to grow earnings and cash flows more robustly over the next couple of years and actually trade at a slight discount to BP shares.