Chesapeake Energy Corporation's (OTC:CHKA.Q) stock price has barely moved over the past year, which is pretty poor considering that the overall market is up just over 20% over that same time frame. But despite its poor performance over the past year -- and quite honestly the past decade has been one of underperformance -- there are reasons to be bullish on the stock. Three areas in particular stand out as being keys that could yield a rising stock price at Chesapeake Energy.

In just the past quarter alone Chesapeake Energy has reduced its long-term debt by $1.9 billion, or 15%, as the following slide notes. 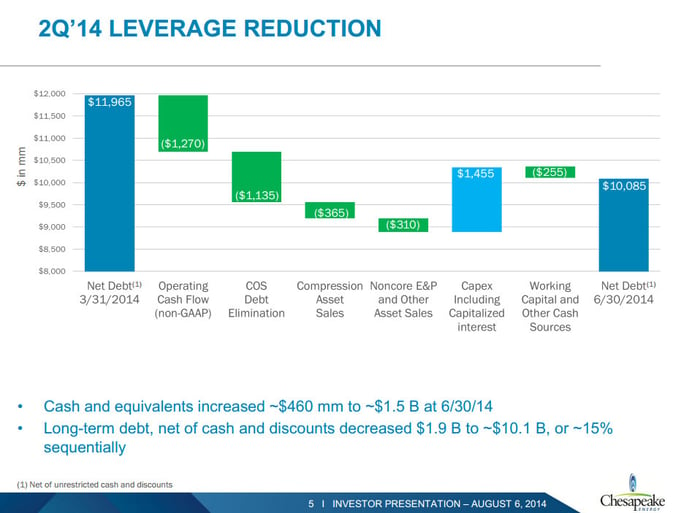 A big chunk of the debt that came off the books was packaged as part of Chesapeake Oilfield Services, or COS when it was spun off as Seventy Seven Energy (NYSE: SSE). The spinoff was actually a move the company made as part its overall plan to reduce leverage. When combined with its other asset sales Chesapeake Energy has made a lot of progress to reduce its debt levels.

Another move Chesapeake Energy is making is to reduce the overall complexity of its balance sheet. After the second quarter ended the company used its increased cash position to buy back all $1.26 billion of the outstanding preferred shares of its Utica shale subsidiary. That repurchase will save the company $75 million each year, which can be reinvested into its high rate of return drilling program or used to further fortify its balance sheet. This is a continuation of a program that has seen the company reduce its total adjusted net leverage by 30% since the end of 2012. Bottom line here, the company really is making progress to improve its balance sheet, which for years has been a drag on the stock price.

Chesapeake Energy recently consolidated its position in the Powder River Basin, which includes the Niobrara oil play. The company sees the resource potential in the Powder River Basin totaling 2 billion barrels of oil equivalent, with more than half of its potential being oil. Further, the company sees the Niobrara in particular being its oil growth engine starting in 2015, which could really help the company diversify its production.

Chesapeake Energy isn't alone in thinking that the Powder River Basin will be America's next great shale play. EOG Resources (NYSE:EOG) announced that it had discovered four new high-return oil plays in the basin earlier this year. Meanwhile, Devon Energy (NYSE:DVN) also sees strong potential in this play to drive future oil focused returns. The success of its industry peers bodes well for Chesapeake Energy, which is already seeing returns in excess of 40% in the Niobrara. Because of this the play could really move the needle for Chesapeake Energy both in terms of oil production growth and returns, which could be just the fuel the stock needs to start rising.

Unlocking value in the Marcellus shale

The final area that could fuel a rising stock price for Chesapeake Energy is the potential spinoff of its southern Marcellus shale assets. The reason it's considering spinning the asset out is because though the assets already generate strong returns, those returns would be even stronger if the assets were no longer a part of Chesapeake Energy. In fact, as the following slide notes this asset could generate 50% organic production growth if it was set free. 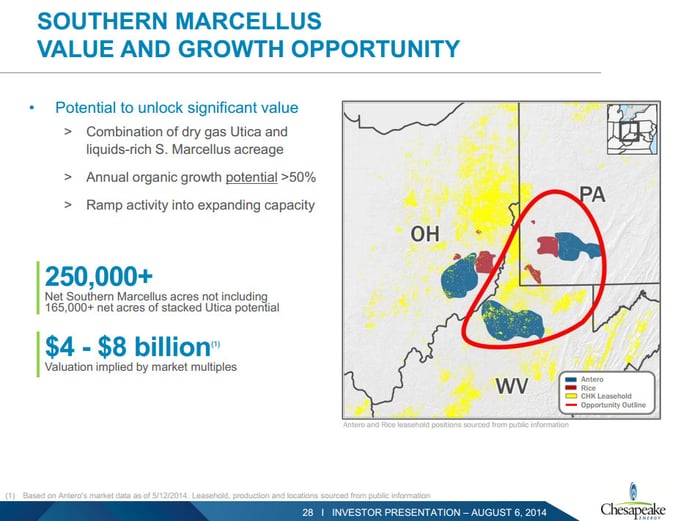 Chesapeake Energy sees that the market is valuing peers like Rice Energy (NYSE: RICE) and Antero Resources (NYSE:AR) at a fairly rich multiple. If that multiple were applied to Chesapeake Energy's assets these would be worth between $4 billion and $8 billion. So, the thought is that by spinning the assets off Chesapeake Energy can unlock the value of the assets, which theoretically would cause the stock price of both companies to rise net of the spinoff.

Chesapeake Energy is positioning the company to create value for its investors. It's shedding debt and focusing on higher margin oil in an effort to drive profitability. In addition to that, it's not afraid to spin off undervalued assets like Seventy Seven Energy and even its southern Marcellus shale assets if those will unlock value for investors and fuel the stock price higher.