When it comes to airline stocks, few have outperformed as much as Alaska Air Group, Inc. (NYSE:ALK) has in 2014. The stock is up 27.8% year to date as I write this. 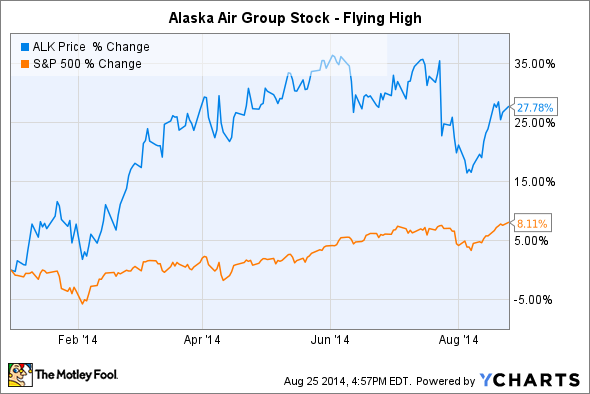 Can the rally continue? An increasingly turbulent operating environment, coupled with Alaska's own missteps, could make that difficult.

Taking off from Denver. Credit: The Motley Fool.

Problems getting out of the gate

Competition is a big part of the problem. After Alaska expanded in Salt Lake City last year, Delta Air Lines (NYSE:DAL) -- which operates a hub in Salt Lake -- began adding flights in Seattle-Tacoma, one of Alaska's home airports.

"Sea-Tac" is a particularly attractive market for Alaska, which uses that hub to fly profitable long-haul routes to Hawaii, Mexico, and most of the continental United States. Delta is already skimming some of the excess. As Andrew Harrison, Alaska's senior vice president of planning of revenue management, put it in last month's earnings call:

Competitive flying in Seattle increased 9%, with nearly all of that growth coming from Delta's additions, offset slightly by modest pull downs from other carriers. Delta will continue to grow in Seattle based on announced schedules. To put that growth in context, today, Delta's Seattle flying overlaps with 41% of our ASMs. We expect that to grow to 50% by next summer, with roughly 30 more daily departures in overlapping markets. Despite the increasing competition, we will still have 55% of the domestic seats in Seattle versus our closest competitor at 16% at the end of this year.

Sound bad? It gets worse. Delta isn't some everyday competitor. The carrier topped the ranks of Airfarewatchdog's annual list of the nation's best airlines, scoring best in terms of canceled flights (only 0.11%) and second-best, behind Alaska, for on-time arrivals (84.41%). Delta ranked fifth in terms of customer satisfaction, a point ahead of Alaska. Keeping customers loyal could prove to be a challenge -- especially if on-time performance continues to drop from recent highs.

In July, Alaska flights arrived on schedule just 83.7% of the time, down from 85.69% in June and sixth among the major carriers. Delta flights delivered passengers on time 85.29% of the time over the same period, according to data from FlightStats.com via the Puget Sound Business Journal.

Why Alaska is a target

So why is Delta after Alaska, and why now? Revenge is one theory, but I think profit is the bigger motivator. Alaska has long flown minimally contested routes, allowing for pricing power and higher margins, as the following table shows:

In contesting Seattle, Delta is chasing fatter fares that might not be available in tighter, volume-driven markets such as New York to Los Angeles -- the same sorts of fares that have allowed Alaska to produce such high margins, and correspondingly outstanding returns for investors. And it won't give them up without a fight. The carrier is cutting prices and offering incentives to its most frequent fliers.

"We are making some tactical network changes as we've done many times before to preserve and enhance the long-term value of this incredible franchise, but we're not going to take the eye off the ball in other areas like customer service or low-cost or returns for investors," CEO Brad Tilden said during the earnings call.

An ambitious strategy, to be sure. Yet I like Tilden's chances. At the very least, it's worth noting that he's been through 21 years of airline wars. This time, Alaska gets to spar with Delta over space at Sea-Tac. The stock may take a hit in the short term, ending the 2014 rally.

Over the long term, this is the rare airline with a solid base and good management. And at 10.4 times trailing earnings, it trades for a cheaper multiple than many of its similarly sized peers. To me, that's a combo worthy of a five-year hold in my CAPS portfolio.