When Facebook (NASDAQ:FB) went public in 2012, all the talk was about how the company was overvalued. But shares have since soared past its IPO price of $38. In the last year alone, shares are up about 85%. 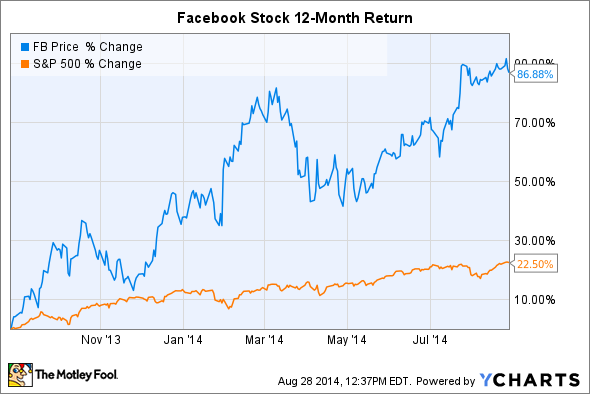 With shares trading so much higher, some investors may now be wondering again whether the valuation is getting out of hand. After all, the company is trading at a price-to-earnings ratio of 80. But a closer look at the company's underlying business reveals three reasons why it's still not time to sell this hot growth stock.

The largest driver for Facebook's soaring revenue since the company went public is the social network's transition to mobile. 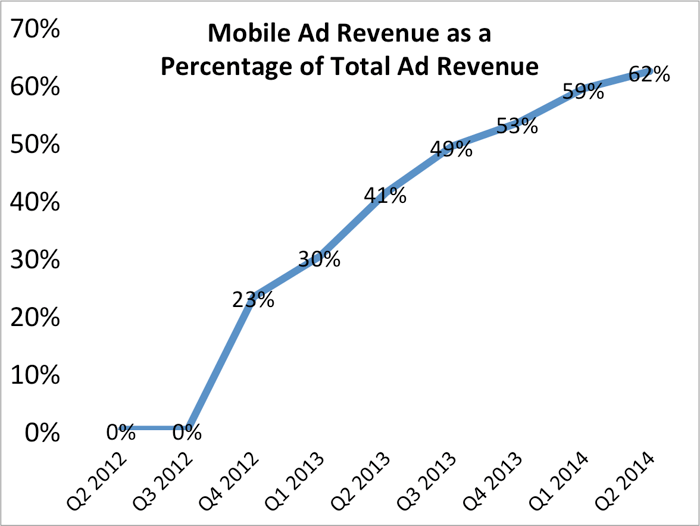 Not only are Facebook's members using the platform more often, thanks to the proliferation of smartphones and the social network's execution on building an engaging mobile app, but also ads are more engaging in the mobile newsfeed than they are on desktop. This means Facebook's shift to mobile is driving huge revenue growth for the company.

Users have been switching to mobile in droves. In fact, 399 million of Facebook's 1.32 billion monthly active users, or MAUs, are classified as mobile-only MAUs. That's up from 219 million mobile-only MAUs in the year-ago quarter.

The company's transition to mobile is among the key catalysts helping the social network put up big growth rates, like the 67% year-over-year growth in ad revenue Facebook reported in Q2. And opportunity remains: 38% of Facebook's revenue still comes from desktop.

Profitability is soaring
As marketers look to capitalize on the growing amount of time consumers are spending on mobile devices, Facebook and its engaging newsfeed is becoming a go-to solution in reaching mobile users. Greater demand, of course, leads to greater pricing power for Facebook. And improving pricing power, in turn, leads to greater profitability. Combining this growing demand for Facebook's advertising with the social network's scalable business model, therefore, profitability is absolutely soaring.

Just look at the trend of Facebook's year-over-year growth in operating income. 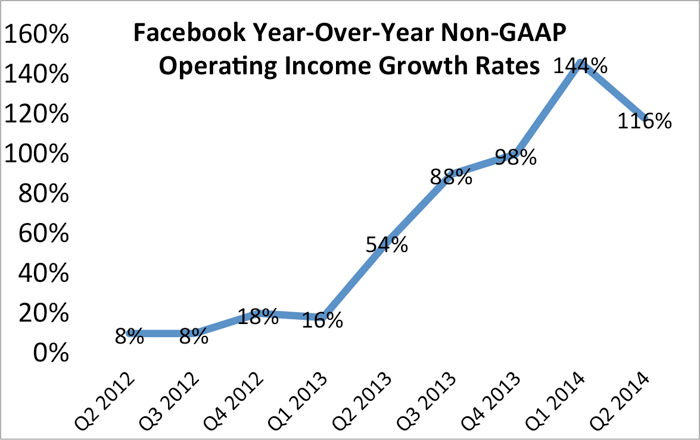 These quarterly growth rates in operating income have outpaced revenue growth for five quarters in a row as operating margins continue to expand.

So, Facebook isn't just a company with fast-growing revenue. It's also quickly becoming wildly profitable. Consider that Facebook's Q2 non-GAAP net income was $1.09 billion, up from $488 million in the year-ago quarter.

Facebook's economic moat is monstrous
Investors want the companies in their portfolios to have sustainable characteristics. As the world's greatest investor, Warren Buffett says, an investment should have an economic moat, or a "moat" that protects a company's profits from potential entrants. The wider and deeper this moat, the better.

This network effect is a powerful competitive advantage for Facebook. It means that Internet users in the U.S. and Europe can log in to Facebook and count on a handful of their friends and family to be active members. With every additional user on Facebook's platform, the more valuable it becomes.

Bringing it all together, the underlying business is exceptional and its performance is astounding. Even at 80 times earnings, it's not time to sell Facebook stock.