As the cost of solar energy has fallen, it has opened up new markets that were once unimaginable in energy. Five years ago, it seemed impossible that a million homes in the U.S. could be powered by solar energy, but that's the goal of just one company -- SolarCity (NASDAQ:SCTY.DL) -- and it hopes to accomplish this goal by 2018.

As the cost of solar energy falls and new technologies like energy storage, smart meters, and demand response advance, new opportunities open up, like microgrids, which can create a self contained energy ecosystem. If designed right, microgrids can produce more renewable energy, cause less strain on the grid, and even provide technology that could change energy around the world.

What's a microgrid?
A microgrid is an electric grid that is much smaller than a city, state, or national grid and contains both generating assets as well as energy demand sources.

It may contain distributed solar on rooftops, ground mounted wind and solar generation, smart meters, energy storage, and even demand response. The main electric grid would then feed into a central point that would control all points of the system and communicate with the main grid, which would still provide a feed of energy to the microgrid. Below is a graphic from Siemens, a large grid supplier, that shows what a microgrid may look like. 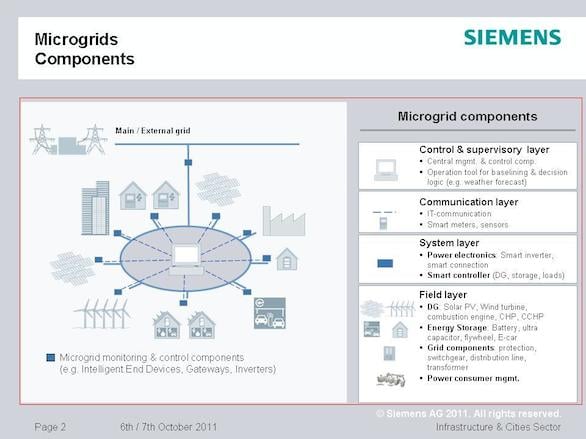 From the grid's perspective, microgrids could turn hundreds of points of demand (homes) into a single point of demand, simplifying operations and giving more control within the microgrid. In some locations, the microgrid could even operate independently of a central electric grid.

Solving the grid's main problem with rooftop solar
One advantage is that microgrids would alleviate the major problem utilities say they have with rooftop or distributed solar's intermittent supply to the grid. By dealing with one large point of contact, the microgrid could smooth out demand from the larger grid and even store excess energy produced within the microgrid for use during times when solar energy production may be high.

If designed correctly, the microgrid could actually improve a utility's cost structure by reducing the amount of spinning reserves required to pick up when intermittent energy sources, like wind and solar, reduce generation.

It may soon be possible to invest in the solar system on your neighbor's roof. Source: SolarCity.

So, how does this change the world?
The revolution of the microgrid will be noticed here in the U.S., but it could also transform impoverished nations with little access to energy worldwide. There are currently 1.3 billion people worldwide who lack power, and most of them live in locations far from a traditional energy plant or electric grid. It's also often infeasible to build a fossil fuel plant or run transmission lines from the central grid to these locations. So, creating a microgrid with local energy sources is a logical solution.

It just so happens that many of these communities in Africa and India are also home to tremendous solar energy potential. If these communities had the ability to build their own grids, produce energy, and store energy, they could improve life immensely. It's possible the improving economics of solar energy, energy storage, and microgrids could improve the lives of billions of people.

Who will play in this market?
So, who is going to be building microgrids and community energy assets?

The first two companies I think of are SolarCity and SunPower (NASDAQ:SPWR). SolarCity is the largest distributed solar installer in the U.S. and has invested in Off-Grid Electric, a Tanzania-based company that provides solar lighting in Africa. It is also developing energy storage to store energy for emergencies within the home that could be transferred to microgrids both here and abroad.

SunPower is working with 7 of the top 10 homebuilders in the country and is testing energy storage systems that would be valuable for microgrids as well. It's also building utility-scale projects in Africa and the Middle East, building out capabilities in places where solar energy potential is highest. Below is a short explanation of SunPower's energy storage vision. 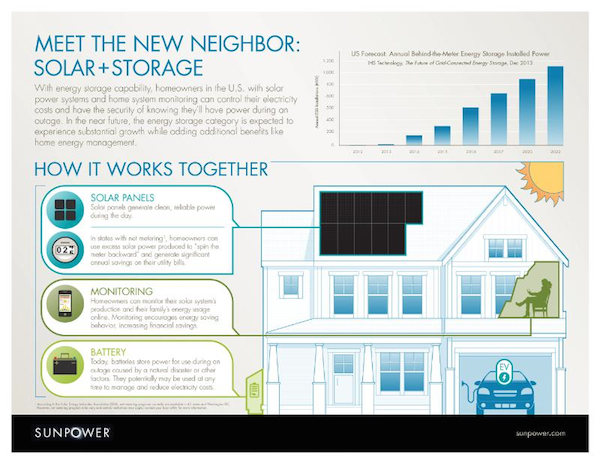 SunPower's plans for energy storage in the home. Source: SunPower.

No doubt companies like Siemens and General Electric would be in this market as well, but microgrids would be more line extensions than new growth markets.

The grid is changing
As distributed energy becomes more common, and utilities adapt to the new normal, where homeowners can own power-generating assets, we'll see new opportunities emerge in energy. One concept I think communities will see as attractive is the microgrid. If built properly, they will put the power in the community's hands and give consumers more control over their energy choices. If that happens, it will be a positive development for the world of energy.

Microgrids Are Coming, and They Could Change the World @themotleyfool #stocks $GE $SPWR $SIEGY $SCTY.DL Next Article
Current