The earth's climate appears to be changing. Over the past 100 years the earth's average temperature has risen by more than a degree Fahrenheit, with another two or more degrees of warming predicted in the century ahead. This is believed to be causing our weather to become less predictable and more intense. Meanwhile, our oceans are seemingly becoming more acidic, while polar ice caps appear to be melting, causing sea levels to rise. This has a lot of folks worried and pointing fingers. However, what we don't yet understand makes for a curious case in the study of climate change. 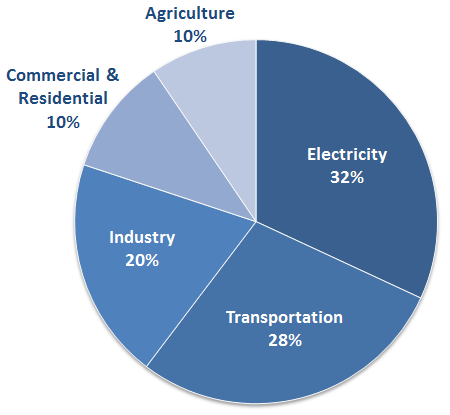 Finding someone to blame
Most of the fingers of blame first point to how we generate electricity, as its production is responsible for about a third of all greenhouse gas emissions in the U.S. Coal in particular is called out, as it produces 75% of the carbon dioxide emissions in the sector despite only producing 39% of America's electricity.

That being said, there are more slices to the carbon pie than just coal. As the chart on the right points out, greenhouse gas emissions come from a range of sources, including agriculture. It's that last slice of pie that I'd like to point out, because it's one that makes for a curious case study.

Belching and microbiology
Livestock actually produce a lot of greenhouse gas emissions. Cows, sheep and even deer have a unique digestive process called enteric fermentation. Inside their rumen, which is a part of their multi-chambered stomach, microbial fermentation takes place thanks to the existence of over 200 species of microorganisms. Some of these microorganisms produce methane gas, which is then vented into the atmosphere when an animal burps. These methane gas emissions are actually 25 times more potent than carbon dioxide emissions, because methane is thought to be so much more efficient at trapping radiation than carbon dioxide.

Life under the sea
Burping sheep, cows, and deer are far from the only natural sources of this climate-warming gas. Wetlands are actually a large source of methane, as well as the oceans. In fact, scientists have recently discovered methane gas bubbling up from the Atlantic Ocean in places they hadn't expected to see it. So far 570 methane seeps have been found along the coast stretching from North Carolina to Massachusetts. While some of this methane could be venting from natural gas deposits underneath the Atlantic, many view that as unlikely -- the Atlantic doesn't have the huge salt layers found in the Gulf of Mexico, which hold much of its oil and gas.

A more likely source of the natural gas is methane-belching microbes similar to those found in ruminating livestock. What scientists are finding curious is the fact that just a few short years ago no methane seeps were thought to exist off of the East Coast. Now scientists believe they have found the largest natural gas seep in the world.

Cause for concern?
Scientists aren't too worried that these methane seeps are a cause for concern when it comes to climate change. What they are finding is that mussels and crabs are able to thrive near these seeps because of a symbiotic relationship they have with methane-eating bacteria. Further, most of the rest of the gas is believed to dissolve before it reaches the surface. It's also believed to be a much smaller amount of gas than what's produced by cows. That being said, scientists still really don't know much about these seeps, as they were not thought to exist a few years ago. This fact just goes to show how much we really don't know about our planet and what, if anything, is causing our climate to change.