At last count Warren Buffett had nearly $66 billion, or 99% of his wealth, tied to Berkshire Hathaway stock. While he certainly knows everything -- and then some -- about the businesses that make up the company he has run for the last 50 years, the real question is, do you?

And no matter what your answer is, I'm willing to bet a few things will surprise you.

The very big business
At the end of June Berkshire Hathaway had $504 billion in assets that brought in $95 billion in topline revenue through the first six months of the year. And what were those businesses making up the company? According to the latest annual report:

Berkshire Hathaway is a holding company owning subsidiaries that engage in a number of diverse business activities including insurance and reinsurance, freight rail transportation, utilities and energy, finance, manufacturing, services and retailing.

In other words, if you name it, Berkshire Hathaway likely has it. Or as Buffett himself noted in his most recent letter to shareholders:

Berkshire now owns 8 ½ companies that, were they stand-alone businesses, would be in the Fortune 500. Only 491 ½ to go.

But having said all that, it's helpful to learn the variety of different companies and industries that all merge together to create Berkshire Hathaway stock: 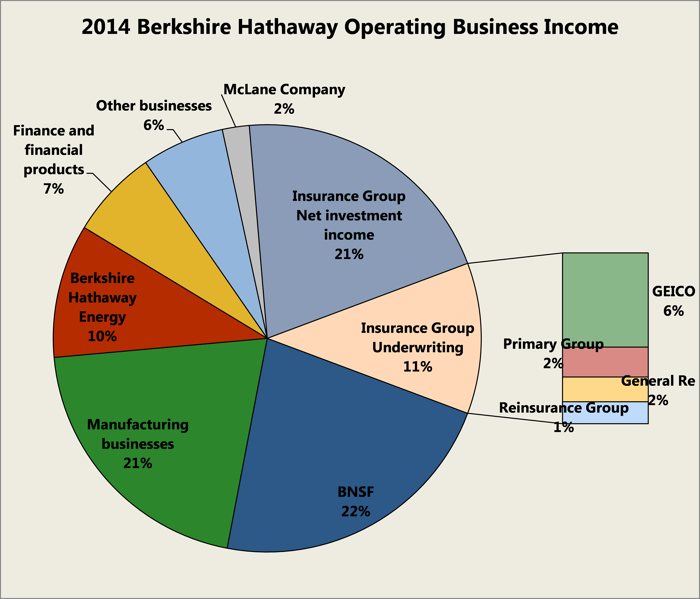 Through the first six months of 2014, the operating segments of Berkshire Hathaway had $11.8 billion in pre-tax income. And as you can see, it is distributed among a variety of different segments. So let's examine them.

Insurance businesses
There's a reason the first business mentioned at Berkshire Hathaway is insurance and reinsurance, because it's the largest single operation of Berkshire, and it's a great place to start. Consider that in his latest letter to those who owned Berkshire Hathaway stock, Buffett starts his discussion on the businesses by including the following quote from 1967, when the first insurance business was purchased:

Our investment in the insurance companies reflects a first major step in our efforts to achieve a more diversified base of earning power.

He went on to say the insurance business is "Berkshire's core operation and the engine that has consistently propelled our expansion since that 1967 report was published."

There are two sides of Berkshire Hathaway insurance: the property-casualty (P/C) side of things, and the reinsurance businesses. P/C insurance writes the typical standard policies we think of -- like the variety of insurance options available from GEICO and others to both individuals and businesses -- while reinsurance actually writes insurance for insurers to spread risk out in the event of a massive catastrophe.

There are two ways these businesses make money. The first is by paying out less in claims and operating expenses than they rake in from premiums received, known as underwriting profit (the 11%, or $1.4 billion seen above).

The next is through investment income made from its "float." Since insurers take premiums upfront and pay claims later (sometimes not for years or decades depending on the policy) they have what Buffett describes as a "collect-now, pay-later model," and as a result they in turn are able to invest money in ways they see fit.

And as Buffett notes, "as our business grows, so does our float. And how we have grown."

Berkshire Hathaway is one of the rare examples of an insurer that earns an underwriting profit -- 2013 marked the eleventh consecutive year -- and also invests its float in such a way that it generates incredible returns that have propelled it forward for nearly 50 years.

While all the businesses of Berkshire Hathaway are important, none have meant as much as the insurance group.

These are a touch easier to grasp, since we often see or use the services they (or businesses like them) provide on an everyday basis. And Buffett's words describe these two in a remarkably simple, yet truly eye-opening way:

BNSF carries about 15% (measured by ton-miles) of all inter-city freight, whether it is transported by truck, rail, water, air, or pipeline. Indeed, we move more ton-miles of goods than anyone else, a fact establishing BNSF as the most important artery in our economy's circulatory system. Its hold on the number-one position strengthened in 2013.

MidAmerican's [now Berkshire Hathaway Energy] utilities serve regulated retail customers in eleven states. No utility company stretches further. In addition, we are the leader in renewables: From a standing start nine years ago, MidAmerican now accounts for 7% of the country's wind generation capacity, with more on the way. Our share in solar – most of which is still in construction – is even larger.

These are labeled by Berkshire Hathaway as "regulated, capital-intensive businesses," because there is extensive government oversight of their operations, and investment by Berkshire to ensure profits keep flowing in.

For example, in 2013 alone, BNSF spent $4 billion on its railroad, which happened to be "a single-year record for any railroad."

As you can see, while they're pricey to run and maintain, the reality is these businesses are also remarkably profitable.

Manufacturing, service, and retailing operations
Buffett has what he describes as a "Powerhouse Five," which include both BNSF and Berkshire Hathaway Energy, but also three businesses that fall into this next bucket:

And of course, if that wasn't enough, the homepage of Marmondescribes it as "a global diversified industrial organization," with "three...companies consisting of 11 diverse, stand-alone business sectors." It's a business with its own businesses, inside of another business!

What isn't even included on that list is McLane company, which is one of the largest distributors of groceries and other wholesale items to retailers across America. In fact, just last year Wal-Mart bought $13 billion worth of goods from McLane.

And those three are just the tip of the iceberg, because as Buffett himself notes, the "activities in this part of Berkshire cover the waterfront," and "the crowd of companies in this section sells products ranging from lollipops to jet airplanes."

It also includes XTRA, which rents out trailers and other pieces of transportation equipment, and CORT, which leases furniture. Buffett highlights that both of these businesses "are leaders in their industries as well."

This isn't the most exciting of businesses, but it is undoubtedly an important piece in the massive puzzle of Berkshire Hathaway.

Investments
While the finance and financial products division of Berkshire is its last operating arm, it's also important to note -- as you likely know -- owning Berkshire Hathaway stock also means owning little bits and pieces of other stocks. And at the end of June, those investments totaled $119 billion, including:

And all that even excludes various other stakes Buffett has claimed, including his sizable positions in Bank of America preferred stock, which pays a 6% dividend, and a 50% stake in beloved condiment maker Heinz.

All of this is to say, the investments Berkshire Hathaway has made are just as diverse as the businesses it owns outright.

The Foolish bottom line
While those are the biggest businesses that make up Berkshire, there are also a number of big names that we haven't even mentioned, including HomeServices -- which has thousands of agents who help Americans buy and sell homes -- and Shaw Industries -- the world's largest manufacturer of a specific type of carpet -- and even jewelry retailers Borsheims, Helzberg Diamond Shops, and Ben Bridge Jeweler.

All of this is to say that when you buy Berkshire Hathaway stock, you're buying a little slice of 83 businesses -- both small and great -- plus a stake in the stock of some of the country's biggest companies, all of which encompass practically every industry and every area of the entire economy of the United States.