The two biggies of aviation, Boeing (NYSE:BA) and Airbus (OTC:EADSY). are always trying to outdo each other in the battle of innovation. Their rivalry has been so aggressive that it's even led to a nasty war of words. One such epic clash involves the revolutionary Boeing 787 and the groundbreaking Airbus A350. These aircraft are the companies' built-from-scratch models -- a point of both pride and trouble for the two. Here's the story of the evolution of these iconic jets, and a look into their future prospects.

Boeing warmed up to the idea of building an innovative aircraft with bleeding-edge technology in the early 1990s when it was looking to replace the aging 767. Ideas included making a "Sonic Cruiser" that would feature enhanced cruising speed, or engineering a larger version of the 747. But neither materialized -- there was lukewarm response for an upgraded 747, and after fuel prices began escalating, airlines shifted focus from higher speed to greater fuel efficiency.

Finally in 2003, the American major initiated talks about developing a carbon-composite plane that would consume less fuel. In 2004, Boeing took the wraps off the 787 Dreamliner, and ended the year with an order for 50 of the aircraft from launch customer All Nippon Airways of Japan.

The 787, as a direct competitor to the Airbus A330, pushed the European airplane maker to come up with a rival offering and prevent Boeing from encroaching on its territory. With continued pressure from customers, Airbus eventually gave commitment to develop an all-new aircraft; its board officially branded it the A350 program in December 2004. However, the program faced severe criticism from customers, and sensing dissatisfaction, Airbus announced the A350 XWB (extra wide-body) in 2006 with three variants: the A350-800, -900, and -1000.

Plagued by unending problems
Creation of the 787 and the A350 were bold steps undertaken by the aviation stalwarts. The two aircraft have been the duo's attempt at building technologically advanced machines, answering airlines' call for higher fuel efficiency in aircraft that provide an enhanced travel experience. While the intentions were good, both Boeing and Airbus have experienced numerous issues with the clean-slate aircraft.

The A350 family was originally slated to enter service in 2010, but alterations such as a wider fuselage and fresh engines pushed the scheduled to 2013. In 2012, after facing production challenges, the date was extended again to the second half of 2014. Also, while Airbus had conservatively estimated a development cost of $4.17 billion (3.5 billion euro) in 2005, it now stands at roughly $15 billion.

Boeing has reeled under Dreamliner hitches, too. In the development stage, the company faced numerous technical and production challenges that delayed delivery. The aero major outsourced work to save on time and cost, but ended up running three years behind the original schedule of 2008 and overshooting the budget by billions. The project development cost stands at a massive $32 billion, compared with the initial estimate of $6 billion. Even after entering service in 2011, the Dreamliner has been plagued with technical snags, including engine failure, cockpit cracks, and battery problems.

Dreamliner's showdown with the A350
Boeing is ironing out production glitches as Airbus prepares the A350 for its first commercial flight this year. The weeklong Farnborough air show in July clearly displayed airlines' hunger for wide-bodies, and Boeing grabbed the opportunity to display the 787-9 model. Boeing had delivered 162 Dreamliners through the second quarter of 2014, and the model's share of total deliveries is gradually increasing: 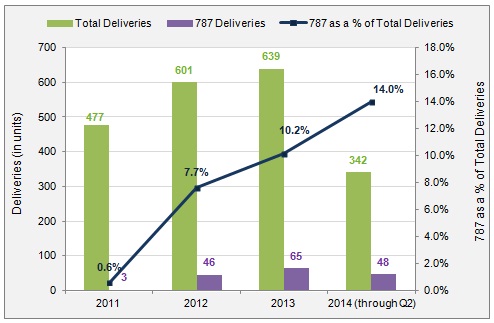 The unique selling point of both 787 and A350 is light carbon fiber, where Airbus tops with 53% of the airframe made of the super-light material, while the 787 has 50%. The rivals have also stressed passenger comfort with their jets. The A350's cabin space is 13 centimeters wider than the 787, but the 787's windows are noticeably bigger. To make the interior look roomier, the companies have kept the jets' side walls flat.

Airbus has received 742 total orders for A350s through July, compared with Boeing's solid backlog of 869 787s at the end of second quarter. The 787 currently has a production rate of 10 per month. Boeing plans to augment that to 14 a month by 2020; it is being supported by expanding production capacity from 787 composite wing box maker Mitsubishi Heavy Industries. In contrast, Airbus expects to reach the 10-per-month production rate by 2018. Airbus CEO Fabrice Brégier is optimistic about the A350 XWB program, saying that if everything remains on track, the jet can make for "40 percent of our revenue, probably for a minimum of 20 to 30 years."

The crux
The 787 and A350 are exemplary creations from the aerospace behemoths. It's true that two have faced hiccups time and again, but then they aren't derivative planes. With an early entry, the 787 definitely has a head start, but the A350 is a strong offering that could make up that time gap. The overall aviation market outlook is quite upbeat and could accommodate both jets, helping Boeing and Airbus reach their goals.

Boeing 787 and Airbus A350: A Tale of Two Planes @themotleyfool #stocks $BA $EADSY Next Article
Current