Please ensure Javascript is enabled for purposes of website accessibility
Log In Help Join The Motley Fool
Free Article Join Over 1 Million Premium Members And Get More In-Depth Stock Guidance and Research
By Tyler Crowe - Sep 1, 2014 at 9:38AM

What has FuelCell Energy Inc. done so far this year to send shares up an eye-popping 78%?

For a company's shares to come close to doubling in less than a year, it takes an almost serendipitous chain of events to occur. For fuel cell manufacturer FuelCell Energy, that has been the case so far this year. Some well timed advancements in the company's business, a few promising newsworthy events, and an investor fervor brought on by a media frenzy have all joined forces to send FuelCell's shares up 77.6% so far this year.

Is this share pop a fluke or a sign of better things to come? Let's take a look at how FuelCell Energy's shares got to where they are today and whether it can maintain that sort of progress over the long term.

A little help from my, um, friends?

There aren't many companies on the stock exchange that are involved in fuel cells, but each of them approaches fuel cell use in a different manner, so you should know the difference. FuelCell Energy designs and manufactures fuel cells as a means of power generation by converting a fuel such as methanol or natural gas into pure hydrogen that is then used to produce electricity in the fuel cell. These larger scale systems only come in sizes of several hundred kilowatts or greater. These systems are mostly sold to utility companies or large manufacturers for either backup power or base power generation.

The funny thing is if you look at the events that happened specifically to FuelCell Energy this year, nothing really stands out that makes you say "yes, this should cause a stock value to double." The most significant news this year is that it has made a couple small scale power sales in the 1-10 Megawatt range, expanded an agreement with Korean manufacturing conglomerate Posco to increase exposure to Asia, received a research grant or two, and signed a $40 million finance agreement with NRG Energy (which also led to NRG increasing its stake in the company to 6%). These are all nice news stories, but in a vacuum they don't really seem like enough to send FuelCell's shares on the ride that have had.

To better understand it, we have to look at the broader fuel cell market. The largest of those events was that Plug Power--a manufacturer of battery replacement modules that run on hydrogen powered fuel cells--secured a large order from Wal-Mart to outfit several of its distribution centers' forklifts with its modules. Combine this with a media frenzy and you get speculators and day traders pouring loads of money into anything fuel cells. This chart shows the price changes in FuelCell, Plug Power, and Ballard Power Systems--the maker of the fuel cells in Plug Power's modules--so far this year. 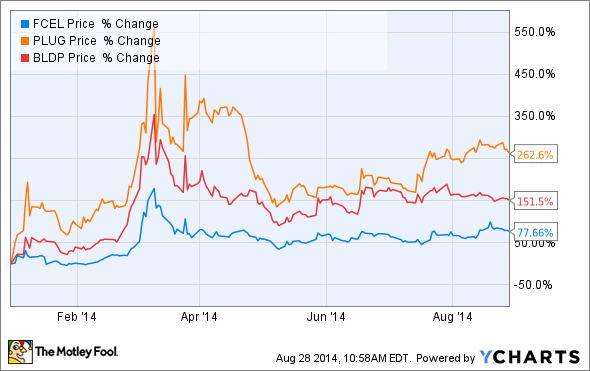 At a few times along the way, traders went into ludicrous speed on these stocks. There were a few instances this year where every single share in Plug Power or FuelCell Energy changed hands in a single day.

So much for long-term investing.

Is there any bite behind that bark?

So after all of this hullabaloo and now that shares are trading significantly higher than what they were at the beginning of the year, some investors may be wondering if they missed the boat on this company. The only real way to know that for certain is to look at business performance. Based on that, FuelCell Energy is throwing off some mixed signals.

The one thing that bodes well for the company is that gross margins are continually expanding. Back in 2012 it netted its first gross profit, and its margin of 5.7% over the past 12 months was the best in the company's history. This, as well as a declining EBITDA loss margin, is a sign that the company is getting control of its per cell costs. 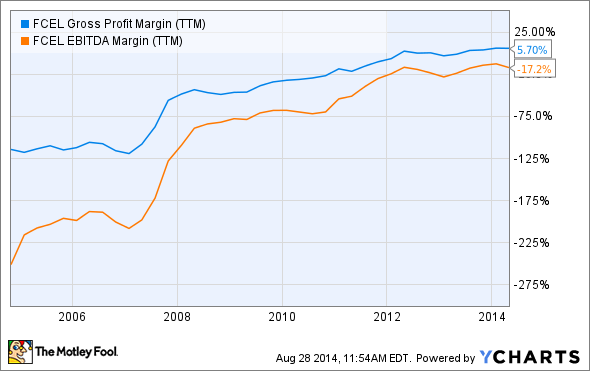 The reason that investors should be a little tepid about the company, though, is that product sales have been relatively flat. FuelCell's total sales for the first half of 2014 are about 5% more than the same period last year, but actual product sales over that same time period declined 2%.

What is of greater concern, though, is FuelCell's declining product backlog. Since FuelCell's fiscal quarter ended January 31, 2013, total product sales backlog has declined by 43%. 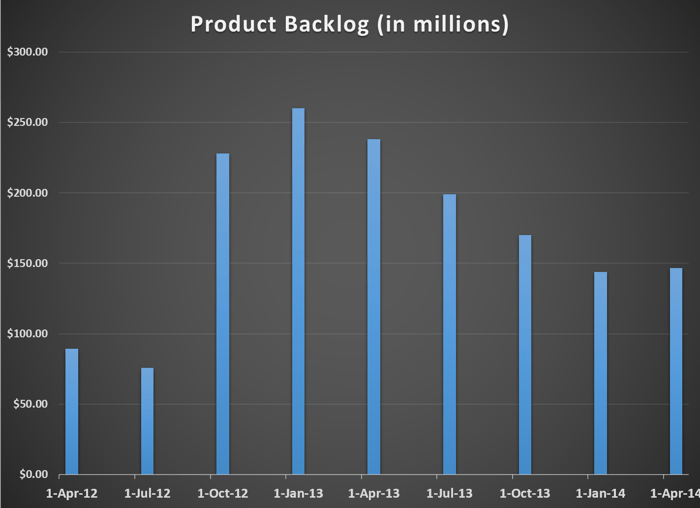 It has been able to keep its overall backlog steady with an increasing service backlog, but declining product backlog should make some investors a little wary.

Now that FuelCell's shares have popped and it's under the eye of more shareholders, expectations for growing sales, expanding margins, and a sign that the company is headed to profitability will be that much greater. Something as minute as a better or worse than expected quarter could send shares drastically in either direction. In some ways, this is unfortunate because the clients FuelCell Energy sells to--utilities, manufacturers, etc.--can take years to make business decisions, which can lead to a very cyclical industry.

If you plan on investing in FuelCell Energy for the long term, you need to keep this in mind. The company will likely encounter several fits and starts between now and if/when it becomes a profitable company. So you don't need to necessarily jump ship if there is a poor quarterly performance. At the same time, those who are looking for a time to buy could benefit from being patient and waiting for one of these moments. A poor quarterly result might allow you to buy shares for much less than today's premium prices.