There are many reasons to invest in American Tower (NYSE:AMT). Goldman Sachs recently started covering the radio tower operator's stock with a "buy" rating, following the lead of positive ratings from Raymond James and Barclays, among other analyst firms. I recently outlined the three strongest reasons why American Tower shares could build on a market-beating 40% gain during the past 52 weeks.

That being said, there's no such thing as a guaranteed winner in the stock market. Even the best stocks and strongest businesses will always face serious risks. On that note, let's dig into three reasons why American Tower's fantastic share price gains might end in the foreseeable future.

Tons of debt
Owning and operating cell phone and broadcast towers is not a cheap business. You might even call it capital intensive.

American Tower's shares have more than tripled in value during the last five years, driven by 167% higher trailing earnings. But the infrastructure investments required to get there grew by 250%, and the only suitable term for American Towers' long-term debt load is "skyrocketing": 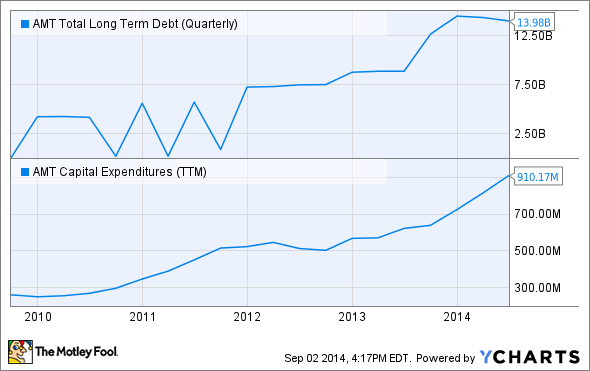 A lot of the recent long-term debt additions have gone into American Tower's domestic and international buyout spree. For example, the company set up another billion-dollar loan to power the $4.8 billion acquisition of U.S.-based Global Tower Partners last fall.

Credit ratings firm Moody's (NYSE: MDC) slapped a Baa3 rating on the new debt paper with a negative outlook. Baa3 is still an investment-grade rating, but just one step above a speculative or "junk bond" classification. Falling below that dividing line would be bad for American Tower's terms and interest rates on new loans, among other negative effects.

The company has already started paying back some of its recent loans at a rate of $200 million per quarter; but with a $14 billion long-term debt balanced against just $283 million in cash equivalents, getting the runaway debt under control is going to take a while.

Fresh competition
SBA Communications (NASDAQ:SBAC) and Crown Castle (NYSE:CCI) are the only publicly traded rivals in American Tower's industry right now. The company is larger and more diversified than both of its major competitors, and growing faster, to boot. Crucially, American Tower is the only member of this trio to make a serious play for dominance in overseas markets. And that's where American Tower is running into some unfamiliar competition these days, threatening to slow down the company's international growth efforts.

This map shows the location of every networked device on the public Internet today. North America and Europe glow bright red, with a few hot spots scattered across other regions. But the map makes it clear that large swaths of the most heavily populated places on earth could use a lot more connectivity. 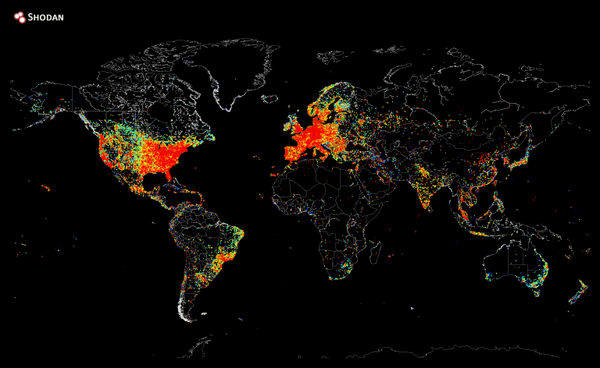 American Tower would love to play a large part in that development, but new roadblocks are emerging. First, American tech giant Google (NASDAQ:GOOG) (NASDAQ:GOOGL) is casting bedroom eyes at Internet services in the developing world. Through its Project Loon, Google plans to circle the earth with a herd of weather balloons packed to the gills with wireless networking equipment.

That's not Google's only networking project -- far from it, in fact -- but giving away wireless connectivity for free in emerging markets could trip up the demand for local services. That's not Google's intention, exactly. The company would prefer sparking competition and infrastructure investments with this project, because Google likes to see broadband networking feeding its ad-click revenue streams in any way possible.

Until that happens, however, Project Loon's presence could also discourage those local network installations. And that would reduce the demand for the assets and services that American Tower hopes to sell in places like Africa, Asia, and South America.

When local telecoms in these high-growth markets start rolling out their own high-speed networks, they might not ask for a ton of tower installation, anyway. Small-cell base stations are growing in popularity, and a handful of strategically placed Wi-Fi nodes can work wonders for data access. They're reaching further and further, too: Today's popular 802.11n standard reaches about 230 meters indoors, but the upcoming 802.11ah Wi-Fi standard aims to stretch a full kilometer (0.6 miles) away.

None of these sprouting rival technologies are likely to entirely erase cell towers from emerging geographies, but they could very well grow important enough to slow American Tower down. And because the company's chief growth prospects lie abroad, that's bad news for growth-oriented investors.

Lack of control
American Tower itself ranks this one at the very top of the list when it comes to risk factors: "Decrease in demand for our communications sites would materially and adversely affect our operating results, and we cannot control that demand." (Emphasis mine.)

It's a harsh truth, especially because American Tower is run by some of the best managers in the business. But the company really doesn't control its own destiny. It sits on top of not one, but two layers of abstraction that make it harder to find the right long-term strategy.

American Tower sells services to telecoms and broadcasters, in fierce competition with the other major tower providers. And these crucial clients don't always have to pick any of the established radio tower operators. If these customers start building their own networks, as detailed in the discussion about small-cell stations and expanded Wi-Fi networks, both Crown Castle and American Tower lose a sale.

Moreover, the telecoms don't have full control over their own market. Wireless phone and data services will be necessary and profitable as long as consumers are willing to buy them. Here's another layer of tough competition, where the losers may be unable or unwilling to honor their cell tower contracts in the long term. The winners will probably need more tower space in order to pick up their newfound subscriber services; but maybe they won't.

In the end, it all comes back to consumer whims and the next unforeseen technology revolution. American Tower may be insulated from sudden industry swings, but is not immune to them.

It might take a perfect storm of several fundamental sea changes happening at once, but American Tower is indeed vulnerable to some risks it cannot control.