On August 11, Kinder Morgan Inc (NYSE:KMI) announced the second largest energy merger in history -- a $71 billion buyout of its three MLPs, Kinder Morgan Energy Partners (NYSE: KMP), Kinder Morgan Management (NYSE: KMR), and El Paso Pipeline Partners (NYSE:EPB). I wrote an article explaining why the deal was terrific for investors and made Kinder Morgan one of the best dividend growth stocks in America. The market seems to have agreed, as share and unit prices surged on the news, with prices of all involved parties rising between 9% and 24% the day following the announcement. 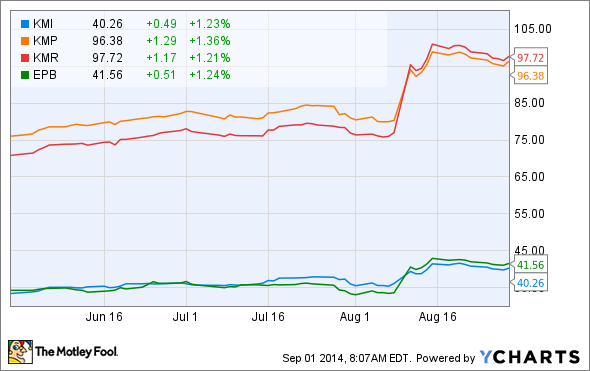 Three of most popular questions I received related to this article were: "Is it too late to buy Kinder Morgan?"; "Which company/MLP should I buy?"; and "What are the tax consequences of this merger if I own any of the MLPs?"

This article is designed to answer these questions and help long-term income investors profit from the $890 billion energy megatrend.

Tax consequences mean one MLP's investors lose in the short term
One of the great benefits to owning a master limited partnership (MLP) is that much of one's distributions are considered "return of capital," and rather than pay taxes on them, they are treated as tax-deferred and lower one's cost basis. When investors sell the units they then pay taxes on the adjusted cost basis, which can eventually hit zero (after which distributions are taxed as regular income).

Due to this tax treatment, long-term MLP investors can permanently defer taxes equal to their initial investment, as long as they hold units forever and pass them onto their heirs. However, according to The Wall Street Journal's Laura Saunders, Alison Sider, and Russell Gold, the Kinder Morgan merger will trigger a taxable event that means this won't be possible.

According to Robert Willens, an independent tax advisor in New York, "In this deal, one group of stakeholders will owe tax so that the company as a whole can benefit." Most of the previously deferred income will now be taxed as regular income, says Robert Gordon, a tax strategist from New York based Twenty-First Securities Corporation.

While the deal is certainly in the best interest of Kinder Morgan as a whole, and long-term investors are sure to benefit from Kinder Morgan's expected 16% dividend increase in 2015 and 10% growth through 2020, Wells Fargo Securities has released an analysis of the post-tax benefits to investors of each of the bought-out MLPs.

While it may shock investors in Kinder Morgan Energy Partners to learn they will end up losing money (in the short term) on the deal, Wells Fargo goes on to explain why the deal is still in their best interest. "Kinder Morgan was unique in that 45% of its cash flow was accruing to the general partner. With a 45% "GP tax" on KMP, it became difficult for the partnership to grow."
The merger will substantially lower the cost of capital for investors in Kinder Morgan Energy Partners, and higher dividend growth is likely to improve total long-term returns.
What does this mean for you?
There are two key takeaways from this taxable event. First, the tax consequences that lower the premium for investors in Kinder Morgan Energy Partners and El Paso Pipeline Partners are due to long-term deferred distributions. This tax event will occur either when the deal closes or if you were to sell your units in Kinder Morgan Energy Partners, El Paso Pipeline Partners, or Kinder Morgan Management.
However, currently all three MLPs are trading at premiums to their buyout prices: KMP by 4%, KMR by 5.5%, and EPB by 4.1%. Those price increases mean that current investors in these MLPs, if they sold their units, would lock in these premiums and help offset the tax consequences mentioned previously (KMP investors would break even on the merger by selling now).
However, as I'll explain below, I feel that selling units of any of the MLPs would be short-sighted. Better to hold onto your units and wind up holding shares of Kinder Morgan Inc, which, as I'll explain below, is set to be a top performing dividend growth stock over the next few years.
What about new investors? Well the answer is simple: Buy Kinder Morgan Inc.
Why you should buy Kinder Morgan today
There are two key reasons why investors should still consider buying Kinder Morgan Inc, even after the pop following the merger announcement: its strong future dividend growth, and the superb total returns they are likely to fuel.
Kinder Morgan's announced dividend plan means a $2/share dividend in 2015 growing to $3.22/share in 2020. Not only does that represent an 8% yield on today's price, but that kind of dividend growth is likely to means strong capital gains. 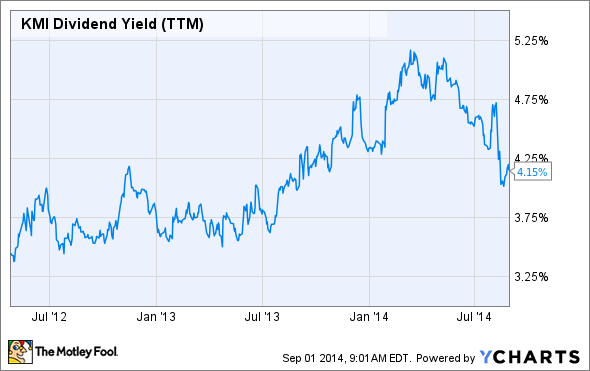 Over the last four years Kinder Morgan Inc's yield has averaged 4.08%. If we apply this historical yield to Kinder Morgan's 2020 dividend, and factor in the dividends over the next five years while applying the long-term tax rates of 15% and 20% (for highest tax bracket), we can determine a realistic long-term total return and find a present day fair value.

As shown in the above table, if Kinder Morgan can meet its dividend growth targets, it is likely to double the stock market's historical total returns through 2020, and that's not including dividend reinvestment (which brings annual total return to 18.6% post-tax). Given that Kinder Morgan and its MLPs have beat or met dividend/distribution guidance in 18 of the last 19 years, this is highly likely and means that Kinder Morgan is deeply undervalued and that long-term investors will likely be richly rewarded indeed.

After the Mega-Merger Announcement, Is Now the Time to Buy Kinder Morgan? @themotleyfool #stocks $KMI $EPB Next Article
Current