Wohlers Associates, which has been tracking the 3D printing industry since the 1980s, recently revised its growth forecasts for the burgeoning industry by a significant factor. According to Wohlers Report 2014, the worldwide 3D printing industry is now expected to grow from $3.07 billion in revenue in 2013 to $12.8 billion by 2018, and exceed $21 billion in worldwide revenue by 2020. Wohlers Report 2013 had forecast the industry would grow to become a $10.8 billion industry by 2021. As far as 3D printing stocks are concerned, the industry's growth trajectory could offer a tremendous runway for growth, assuming companies can grow alongside the industry and deliver on the potential for long-term fortunes -- neither of which are guaranteed. 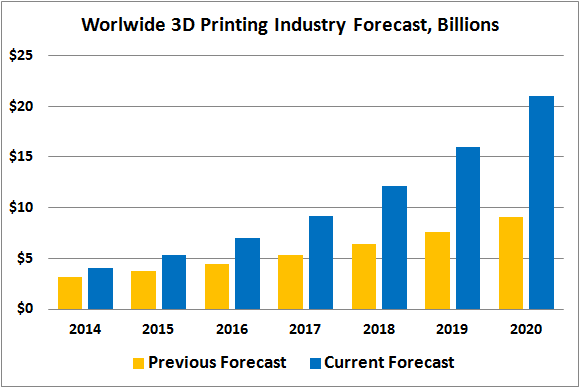 Citing expanding uses of the technology for producing parts that make their way into final products, as well as increased demand for "personal," sub-$5,000 3D printers, many of which offer professional features in an easy-to-use and relatively affordable package, the 3D printing industry is now expected to grow by over 31% per year, compounded, through 2020. Such 3D printers are often referred to as "prosumer" models, aimed at serious enthusiasts and professional users.

In recent years, the metal 3D printing industry has experienced tremendous growth, and companies like General Electric (NYSE:GE) have been working to use metal 3D printing for mission-critical aviation applications like jet engine fuel nozzles. Ultimately, General Electric has plans to 3D-print 45,000 fuel nozzles a year, which will take to the skies in its upcoming Leap jet engine in the coming years.

On the prosumer front, 3D Systems (NYSE:DDD) has plans to release an army of sub-$5,000 prosumer 3D printers that will begin shipping by the end of the year. Overall, prosumer 3D printers are anticipated to resonate well with small and large businesses alike, because they offer professional-level quality for an affordable price.

Where 3D printing stocks fit in
In a 3D printing gold rush, the companies that sell 3D printers, materials, and services are the so-called "picks and axes," meaning they are likely in the best position to participate in the overall rise of 3D printing. Prospective investors should identify leaders in the industry and look for revenue growth faster than the industry itself to indicate a company is growing its market share. The table below breaks down 2013's full-year figures for the six largest publicly traded 3D printing stocks.

3D Systems and Stratasys may be the largest 3D printing companies around, but together they only represented about one-third of worldwide 3D printing revenues in 2013. In other words, the 3D printing industry remains highly fragmented, and because no single company controls the majority of the market, there's a massive opportunity for a number of 3D printing companies to grow their revenue and market share considerably.

Different game plans
3D Systems has chosen to go the serial acquisition route, having purchased approximately 50 companies in the last three years. Not everyone may love this hyperaggressive strategy, but it has certainly helped 3D Systems achieve revenue growth well above the industry average, which directly translates into revenue share growth. As 3D Systems pares back its rapid pace of investment in the coming years, the company is promising to deliver profitability growth to shareholders. Although the promise of profitability isn't guaranteed, 3D Systems' management continues to put the long-term best interest of its business ahead of short-term earnings, meaning investors should have faith in this strategy until proven otherwise.

With the largest installed base of 3D printers in the industry, Stratasys offers tremendous long-term potential to generate a profitable stream of recurring revenues through the sale of high-margin materials that are consumed as its printers are put to use. Last quarter, Stratasys shipped a total of 14,909 3D printers, representing a 69% sequential increase in unit volume, driven by strong growth across its consumer and industrial lines. Although Stratasys grew its 2013 revenues in line with industry growth rates in 2013, the company's year-over-year revenue growth rate recently accelerated to more than 61% in the first half of 2014, suggesting that the company is continuing to gain market share.

Prospective investors interested in ExOne, voxeljet, Arcam, or Materialise should acknowledge that these periphery 3D printing stocks represent an extremely small percentage of the overall industry and are far too specialized for investors to gain broad-based exposure that allows them to participate in the overall rise of 3D printing. Because of the greater risk associated with investing in the periphery, it should only be considered for the most risk-tolerant investors with long-term time horizons.

Not a sure thing
To be clear, investing in the growth of 3D printing by owning shares of 3D Systems, Stratasys, or other 3D printing stocks is far from a sure thing and carries a high degree of risk. The sector is richly valued relative to the S&P 500, the potential exists for disruption in the form of patent expirations or technological breakthroughs, and the promise of future profitability is far from a guarantee. While it's true that 3D Systems, Stratasys, and others could acquire its potential disruptors, it isn't necessarily a sustainable strategy over the ultra long term.

In my opinion, the best chances for an investor to profit from the rise of 3D printing is to own a small basket of 3D printing stocks relative to their overall portfolio, which they are willing to hold on to for at least three to five years. While not every 3D printing stock in the basket is likely to be a winner, the hope is that the basket's winners will more than compensate for the losers.

For more 3D printing investing considerations, please see How to Invest in 3D Printing Stocks for the Long Term.