Please ensure Javascript is enabled for purposes of website accessibility
Log In Help Join The Motley Fool
Free Article Join Over 1 Million Premium Members And Get More In-Depth Stock Guidance and Research
By Travis Hoium - Sep 13, 2014 at 10:00AM

Investors were disappointed that Apple's iPhone 6 didn't include a sapphire cover screen, but a step back reveals why this generation iPhone was never realistic for sapphire.

Hindsight is always 20/20 when it comes to new products, especially those as influential as Apple's (AAPL 0.11%). With that in mind, it shouldn't be at all surprising that highly touted sapphire technology from GT Advanced Technologies (NASDAQ: GTAT) played a very small role in Apple's iPhone 6 and Apple Watch announcements on Sept. 9.

The market was disappointed by the lack of a sapphire cover screen for the iPhone and consumers looking for a tougher screen may have been as well, but there was little chance Apple could have built out supply to put sapphire into devices this early. Even Apple has to abide by the laws of physics when it comes to building its products. 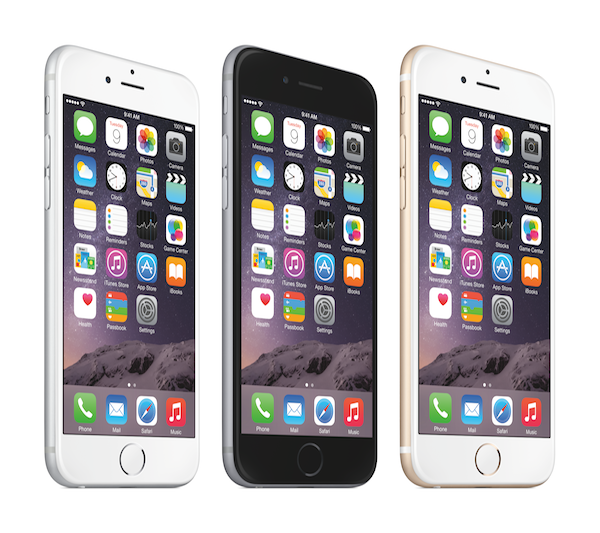 Time was short getting sapphire into the iPhone
In a past life I was a project engineer installing capital equipment at 3M's largest manufacturing plant, and I can tell you from experience that there's almost no way Apple could have built out capacity fast enough to put sapphire displays into the iPhone 6. The agreement between Apple and GT Advanced Technologies first came to light on Nov. 3, 2013 and 10 months is just not enough time to build out and qualify capacity to make tens of millions of iPhones by launch date.

You may suggest that it would be possible to build sapphire capacity in stealth but even that would have been nearly impossible to hide. GT Advanced Technologies is a public company that reports not only revenue, but backlog every quarter. If it had and agreement with Apple for hundreds of millions of dollars of equipment or materials it would have been hiding a material impact on its business by hiding it from investors. As you can see below, it wasn't until after the agreement was reached that deferred revenue spiked and work truly began, something I'll reinforce later on. 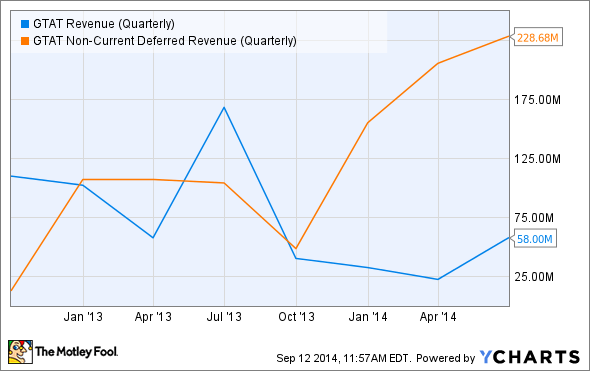 More realistically, GT Advanced Technologies may have been preparing for an agreement with Apple behind the scenes but made it public as soon as a contract with prepayments were signed sealed and delivered. It wasn't until that contract was signed that manufacturing capacity could begin being built.

Apple is fast, but not that fast
Keep in mind that the iPhone 6 is expected to be in customers' hands on Sept. 19, so full scale final production likely began in early August, if not July. Components further up the supply chain, like sapphire, would need to begin being manufactured sometime between May and July because even the leanest supply chain can't put tens of millions of iPhones on store shelves overnight. Let's breakdown what we know about Apple's move into sapphire with that timeframe in mind.

Documents obtained by 9to5 Mac in January pointed to a hopefully February "go live timeline" for Apple's sapphire facility operated with GT Advanced Technologies in Mesa, Arizona. But as I'll explain below GT Advanced Technologies was starting with a shell of a building in November and going live may mean nothing more than producing enough sapphire to do small production runs (camera cover and home button) or qualify equipment and export material to other manufacturing partners in Asia who will be doing further fabrication testing and manufacturing.

But Apple certainly wasn't ready to go live with full production in February. It was as recently as Aug. 5 that GT Advanced Technologies' CEO Tom Gutierrez said the following:

"The build-out of our Arizona facility, which has involved taking a 1.4 million square foot facility from a shell to a functional structure and the installation of over 1 million square feet of sapphire growth and fabrication equipment, is nearly complete and we are commencing the transition to volume production."

He went on to say that "full operational efficiency" wouldn't be reached until early 2015. So, producing enough sapphire material to build tens of millions of 4.7" and 5.5" displays was going to be next to impossible.

Even the most aggressive manufacturing expansions take time to build out, even for Apple. Sapphire is coming to more devices and I wouldn't doubt it'll be on future iPhones, but September of 2014 was a timeline that was never realistic, something that seems obvious in hindsight.

It's likely the Apple Watch was the real focus of Apple's sapphire buildout. Image source: Apple.

A more realistic future for Apple and sapphire
Realistically, the manufacturing capacity GT Advanced Technologies and Apple have built will be used on a smaller scale this year for the iPhone home buttons, camera cover, and the Apple Watch display and sensors, which are confirmed to include sapphire.

It's likely the Apple Watch that the Arizona sapphire facility has been ramping up for. Gutierrez may have been eluding to that in the August conference call when he said:

"The fourth prepayment from Apple is contingent upon the achievement of certain operational targets by GT. GT expects to hit these targets and receive the final $139 million prepayment by the end of October 2014."

If the prepayment is contingent on meeting certain volume goals it would make sense that these goals would be for the Apple Watch, not the iPhone 6. October would be around the timeframe sapphire would need to be produced in volume to meet demand for the Apple Watch and its timeframe of launching in early 2015.

There have also been rumors that future iPods would include sapphire as well. Given the fact that they haven't been refreshed in some time and GT Advanced Technologies would be in volume by the time they're in production, this could also make sense.

Sapphire is coming, just not yet
Not only does the sapphire production timeline make more sense for the Apple Watch and iPods, it would be incredibly risky for Apple to rely on an incredibly rushed manufacturing facility for a key component in its most important product.

Reading between the lines, we can also see that neither company was going to be ready to produce sapphire in enough volume to make a cover screen for the iPhone 6 launch.

With that disappointment behind us, there's no doubt that Apple is betting a lot on sapphire and engineers are likely at work right now building it into the company's next generation products. That's where a company like GT Advanced Technologies will see upside from Apple but to expect it this soon was probably a mistake. That seems obvious now, but even I got caught up in hope that sapphire was coming to the iPhone 6. But the timeline was simply too aggressive, even for Apple.