Troubled consumer electronics retailer RadioShack (NYSE: RSH) reported yet another dismal quarter on Sept. 11, with sales plummeting, liquidity drying up, and any hope of a turnaround rapidly fading. It was clear that RadioShack was essentially out of options months ago. While the company hopes to work with stakeholders on a plan to overhaul its balance sheet and reduce its cost structure, RadioShack is in such a terrible financial state that it's hard to imagine any outcome other than bankruptcy. Here are three charts that illustrate the severe problems facing the company.

Who shops at RadioShack anymore?

While comparable-store sales have been lackluster for the past few years, RadioShack kept them from getting too awful through the middle of 2013, and it even showed some progress in boosting sales. But then everything fell apart: 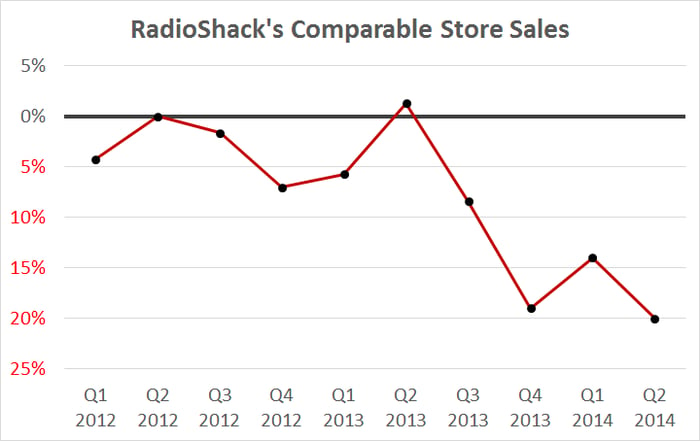 The 2013 holiday season was particularly bad, with comparable-store sales falling by 19%. A slight improvement followed in the first quarter of this year, but a 20% decline during the just-reported second quarter shows the company is making no progress at all in drawing customers back to its stores. A new financing deal does nothing to fix this problem.

Weakness in the consumer electronics industry as a whole is partly to blame, with NPD estimating the market contracted by 2.5% during the second quarter. Saturation in the U.S. smartphone market is also a factor, as RadioShack has turned to selling handsets and plans over the past few years. But the main factor behind the fall of RadioShack is that the company has simply fallen behind the times. While consumers are increasingly shopping online, RadioShack has a negligible e-commerce business. Rival Best Buy (NYSE:BBY), in contrast, has invested in its e-commerce business over the past couple of years, revamping its website and fulfilling online orders directly from its stores in order to speed up shipping times and increase product availability.

About that liquidity...
Even a year ago, RadioShack didn't look like it was in too bad of shape. The company had in excess of $400 million in cash, and while RadioShack was losing money, over $800 million in total liquidity seemed enough for it to survive on for at least a while.

One year later, and the picture is very different: 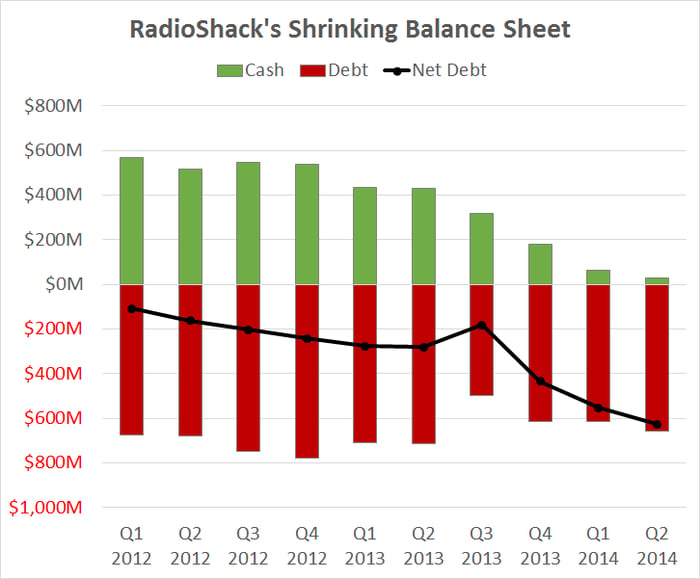 RadioShack has burned through almost all of its cash, leaving just $30.5 million at the end of the most recent quarter. Total liquidity is down to $182.5 million, which is less than the $235.7 million the retailer lost during the first two quarters of this year. In other words, RadioShack may very well not make it to the holiday season this year, and if it does its ability to buy inventory is going to be greatly hampered.

RadioShack will almost certainly need additional capital, but it's unclear why anyone would give it to this particular retailer. RadioShack is a fundamentally broken company. There has been no sign that things are improving at all, and any additional capital would be burned through within a couple of quarters.

Costs are out of control
As recently as the first-quarter earnings report, RadioShack CEO Joseph Magnacca talked about the company's progress in reducing costs. But looking at the following chart, I'm not sure what progress he's referring to: 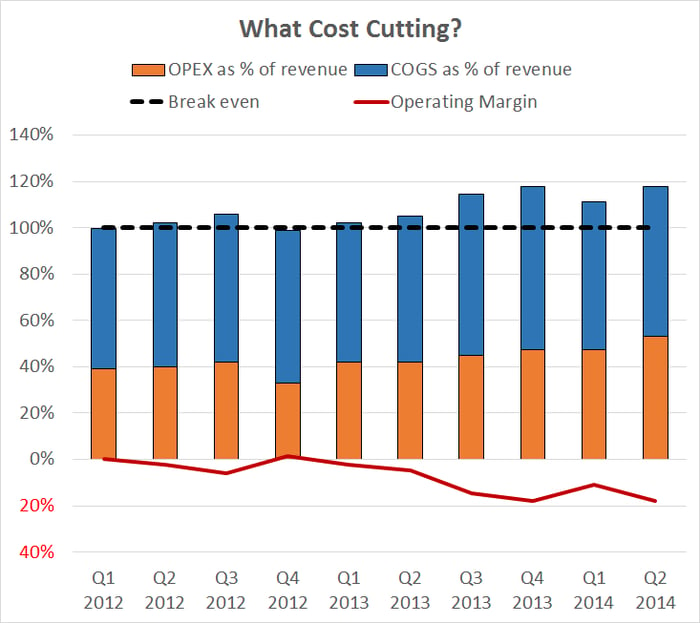 Operating expenses, which were around 40% of revenue at the beginning of 2012, surpassed 50% during the most recent quarter. Along with a decline in the company's gross margin, this has led the operating margin to become increasingly negative as time has passed.

Sales are declining far faster than costs, resulting in quarterly losses growing seemingly without bound. The operating loss during the most recent quarter more than doubled year over year, and the interest expense from all that debt certainly doesn't help. For the sake of comparison, Best Buy only spent 20.4% of its revenue on operating expenses during its second quarter.

The only way to achieve the cost reductions necessary is to close an enormous number of stores, but RadioShack's current credit agreements do not allow that. A new financing deal might allow this to happen, but at this point it could be too late.

Final thoughts
RadioShack has shown no progress at all in its turnaround effort, posting its worst comparable-store sales performance so far during the second quarter. With almost no cash and little liquidity remaining, this could be RadioShack's final holiday season. A Hail Mary financing deal could extend the company's life and allow for closing more stores, but this doesn't fix the fundamental problem plaguing RadioShack: no one shops there anymore.