According to the Transportation Research Institute at the University of Michigan, U.S. fuel economy is now up to 25.8 mpg, up 24% since August of 2008. This is certainly great news to those who want to see America become less dependent on foreign oil, which made up 33% of oil consumed in the U.S. in 2013.

However, it's a far cry from President Obama's mandated 54.5 mpg by 2025, which the president has said "represents the single most important step we've ever taken to reduce our dependence on foreign oil."

Automakers such as General Motors (NYSE:GM) are on board with the standards, with Greg Martin, executive director for communications for the automaker, stating, "Customers want higher fuel efficiency in their cars and trucks, and GM is going to give it to them. [...] We expect the rules to be tough, but we have a strong history of innovation, and we'll do our best to meet them."

As I've written before, Automakers are working hard to squeeze every last bit of efficiency from the internal combustion engine using smaller, more energy-dense engines that utilize super chargers, turbo chargers, and new 8, 9, or even 10 speed transmissions, as well as plug-in hybrid technology. Building vehicles out of greater amounts of lightweight aluminum, as Ford (NYSE:F) is doing with its new F-150 pickup truck, is another approach.

However, now a new technology has arisen that promises to help America take its vehicle's fuel economy to new heights, and it hails from Silicon Valley, not Detroit.

Driverless cars: a panacea?
The adoption of driverless cars would solve many problems, including saving tens of thousands of lives, quadrupling highway capacity, and returning independence to those who are too elderly or physically unable to drive.

However, I'd like to focus on how autonomous vehicle technology could help America in its quest to raise its fuel economy and achieve independence from foreign oil.

For example, autonomous vehicles, communicating their positions wirelessly, could travel very closely, while still maintaining better safety than human drivers. By drafting off each other in this way, wind resistance would be greatly reduced, and fuel economy would increase by 20%-30%, according to a study by the Rocky Mountain Institute. A second study, by the Tampa Hillsborough Expressway Authority, in 2013, found fuel savings of 28%. 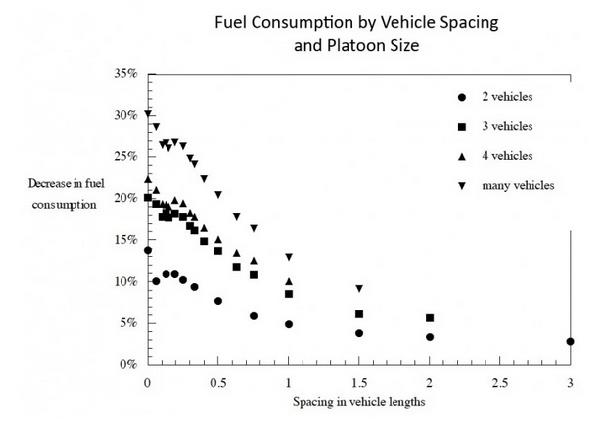 Another benefit to driverless cars is that vehicles could be designed differently. For example, according to Bob Joop Goos, chairman of the International Organisation for Road Accident Prevention, "More than 90 percent of road accidents are caused by human error."

By creating safer highways and roads, vehicles could be redesigned from the ground up, for improved efficiency while still maintaining safety. For example, the Tesla (NASDAQ:TSLA) Model S achieved a five-star crash test rating across the board, making it one of the safest cars ever tested by the National Highways Traffic Safety Administration (NHTSA), because of its electric design. The lack of an engine up front created a massive crumple zone, and the extra rigidity of the battery placed in the floor (as well as its high-strength aluminum frame) increased the vehicle's structural strength to such an extent that the machine that was supposed to crush the roof broke.

The final way driverless cars will save on gas is by parking more efficiently. For example, an MIT study found that in urban areas, 40% of gas is wasted as drivers circle around looking for parking. Self driving (and parking) cars that communicate wirelessly could solve this problem.

Where's my driverless car?
GM just announced that its 2017 Cadillac CTS sedan will feature standard vehicle two vehicle (V2V) technology while another model will feature "super cruise," which will allow a car to lane follow, adjust speed, and brake autonomously, not just at highway speeds, but also in stop-and-go traffic.

Meanwhile, Tesla CEO Elon Musk just announced that Tesla is performing feverish work on self-driving cars. In the past, Musk admitted that Tesla had taken part in technical discussions with Google (NASDAQ:GOOG), the world's leader in driverless car technology, who owns a fleet of automated Toyota Priuses that have logged over 700,000 accident-free miles.

Writing in MIT's Technology Review, Lee Gomes points out that even Google's driverless wonders can't avoid potholes, drive in the rain, or use 99% of public roads -- which explains Toyota's reluctance to continue supporting R&D into the technology. However, not all automakers are so ready to adopt this technology. Toyota (NYSE:TM), one of the leading innovators in driverless technology, is pulling out of its R&D efforts until it can be sure the technology is ready, according to deputy Chief of Safety Technology, Seigo Kuzumaki.

Foolish bottom line
Despite its current limitations, the benefits of driverless cars, to both safety and fuel efficiency, are simply too great to ignore. The NHTSA is currently working on new rules (to be put forth in 2016) that would mandate automakers include V2V technology in all new vehicles, setting the stage for companies such as GM, Ford, and Tesla to usher in a brave new future of driverless cars, increased safety, and quite possibly, American energy independence.