It's been clear for a long time that RadioShack (NYSE: RSH) is in big trouble. RadioShack stock, which was above $20 as recently as 2010, has spent the last 2 years in low single-digit territory. 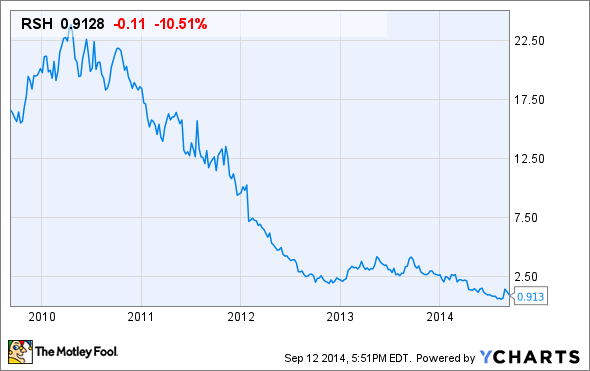 RadioShack's last hope for a turnaround was an aggressive cost-cutting plan, announced in March, that called for closing more than 1,000 stores this year. However, the company's lenders scuttled that plan just 2 months later. After that setback, bankruptcy looked like RadioShack's best option.

After 4 more months of dreadful results, RadioShack's management team is nearing the same conclusion. The only people still in the dark are RadioShack shareholders and day traders looking to flip the stock for a quick profit. Don't get sucked into this madness -- RadioShack stock is almost certainly worthless.

As of early May, RadioShack appeared to be spiraling toward bankruptcy. Its cash on hand had declined by nearly two-thirds since the beginning of 2014 (from $180 million to $62 million). However, RadioShack shareholders could at least take comfort in the $362 million available on the company's credit line.

By the beginning of last month, RadioShack was down to just over $30 million of cash, with only $152 million available through its credit line. In other words, total liquidity dropped by more than 50% in the span of 3 months.

By the time the critical holiday shopping season rolls around, RadioShack may have difficulty paying for inventory. Moreover, selling smartphones is a capital-intensive business that will further sap RadioShack's liquidity. For example, RadioShack may have to pay Apple close to $600 upfront for an iPhone 6. It then sells many of those phones for $199 to customers on subsidized phone plans.

Eventually -- perhaps 2 months later -- the carrier sends RadioShack a $450 subsidy. In the meantime, RadioShack is out hundreds of dollars. Multiply that by hundreds of thousands of phones, and RadioShack could be in for a quick cash crunch.

RadioShack on the brink

RadioShack alluded to the possibility of bankruptcy in the earnings report it released last Thursday, albeit in a very roundabout, jargon-filled manner. Its official quarterly filing with the SEC was more blunt:

Given our negative cash flows from operations and in order to meet our expected cash needs for the next twelve months and over the longer term, we will be required to obtain additional liquidity sources, consolidate our store base and possibly restructure our debt and other obligations ... If acceptable terms of a sale or partnership or out-of court restructuring cannot be accomplished, we may not have enough cash and working capital to fund our operations beyond the very near term, which raises substantial doubt about our ability to continue as a going concern.

RadioShack doesn't have much time to figure out its next move, either. Standard General -- a hedge fund that owns a significant amount of RadioShack stock and debt -- is reportedly working with UBS on a new financing package to stave off bankruptcy. However, any deal would have to be wrapped up within days, according to The Wall Street Journal.

RadioShack is running out of time (Photo: The Motley Fool)

Realistically, this means that short of a miracle, RadioShack will eventually declare bankruptcy. Even if RadioShack can secure some extra liquidity to make it through the holiday season, the company is burning cash so quickly that it would likely be in dire straits again by next year.

As obvious as it is that RadioShack is spiraling toward bankruptcy, Mr. Market has looked the other way. Surprisingly enough, RadioShack stock rose on Thursday, after the company announced that it needed to take quick action to address its persistent losses and liquidity problems. 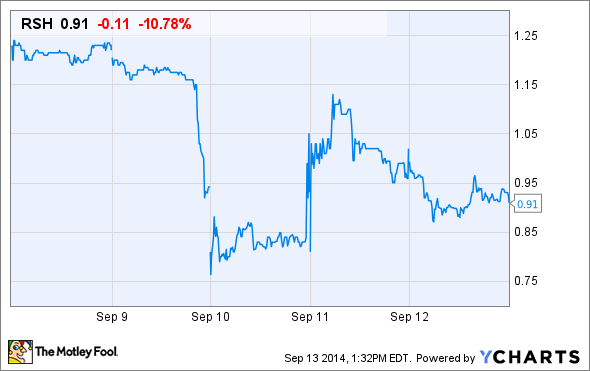 RadioShack shares did fall on Friday, but that still left the stock up more than 50% compared to its mid-August level. RadioShack stock's wild gyrations during the past few weeks have attracted hoards of day-traders looking to flip the stock for a quick profit.

However, this is a fool's game. (Not to be confused with a Fool's game: here at the Fool we believe in investing for the long-term -- not day trading.)

Some companies like American Airlines have been able to compensate shareholders well, despite going through bankruptcy. RadioShack isn't likely to be one of those companies. Whereas American Airlines benefited from an industrywide revival, physical consumer electronics retail stores won't be making a comeback.

While RadioShack CEO Joe Magnacca recently talked about "improving trends" in the core retail segment, all he meant was that the rate of sales declines has slowed -- but revenue is still falling! Moreover, RadioShack would need to boost comparable store sales by 30%-40% from current levels to get back to breakeven. Modest operating improvements won't create any value.

In a worst-case scenario, RadioShack will have to liquidate. In a best-case scenario, it will develop a workable plan to stay in business. Even then, its unsecured creditors -- including the holders of its $325 million loan, suppliers, and landlords -- will get compensated with new RadioShack stock, and current shareholders will get nothing.

The only thing investors really need to know about RadioShack stock is that they should stay far away. RadioShack is rapidly burning cash, liquidity is already at a dangerously low level, and the company needs massive comparable store sales growth to get back to breakeven.

There is a good chance that the RadioShack story ends with a total liquidation of the company within the next year or so. But even if RadioShack manages to stave off that disastrous ending, it is still almost certain to declare bankruptcy in order to get out of unprofitable store leases and clean up its balance sheet.

Either way, owners of RadioShack stock are likely to get nothing, give or take a few pennies. Any upside from a potential turnaround or fire sale will benefit unsecured creditors, not RadioShack shareholders.