GoPro (NASDAQ:GPRO), which has rallied nearly 180% since its IPO in June, is a divisive stock among investors. The bulls believe that GoPro's 38% year-over-year revenue growth last quarter will continue, fueled by brand loyalty and newer products. The bears point out that GoPro's expenses are soaring, and competitors are launching comparable devices at lower prices.

According to a recent Bloomberg report, smartphone maker HTC could be GoPro's newest rival. The Taiwanese tech company will reportedly unveil an action camera of its own at its Double Exposure event in New York on October 8. The report claims that HTC's action camera will be a tubular waterproof device similar to Polaroid's XS100i, use a wide-angle lens to record 16-megapixel video, and will support Bluetooth and Wi-Fi connections.

If HTC expands into action cameras, could it disrupt GoPro's core market? Or is this just a desperate attempt by HTC to remain relevant as its core smartphone market crumbles?

Marketing blunders, delayed shipments of flagship phones, high-profile executive departures (including HTC One lead designer Scott Croyle), and intense competition from Samsung and Xiaomi have all contributed to HTC's decline. 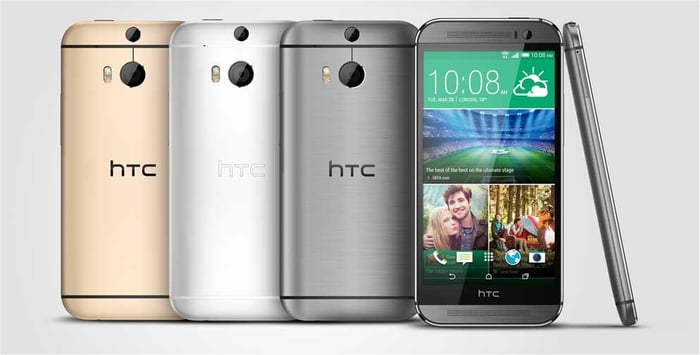 HTC's recent strategies have been aimless and desperate. Last year, HTC tried to ride on the coattails of Facebook's (NASDAQ:FB) success with the first "Facebook phone," the HTC First, but the unpopular device was quickly killed off. HTC also tried to secure a deal with Amazon (NASDAQ:AMZN) to make the Fire Phone, but luckily dodged a bullet when Amazon designed the doomed device by itself. HTC released its newest flagship phone, the HTC One M8, in two flavors, Android and Windows Phone, apparently because it wasn't confident that the Android version could hold its own against Samsung. HTC also recently announced it will launch a smart watch next year.

It's not surprising that HTC would start experimenting with action cameras as well. Research firm TechNavio expects the global action camera market to grow at a compound annual growth rate of nearly 24% between 2013 and 2018. IDC estimates that GoPro controls 47.5% of that market, followed by Sony (NYSE:SNE) at 6.5%. The rest of the market is fragmented among smaller competitors.

This is troubling, because GoPro still hasn't signed a long-awaited manufacturing deal with contract manufacturing giant Foxconn, which owns 8.88% of the company. This means other tech companies that hold large manufacturing agreements could pump out similar cameras as the XS100i at similar prices. Trying to match those prices will severely punish GoPro, since its net loss of $19.8 million last quarter was already nearly four times wider than its loss of $5.1 million a year earlier.

Once HTC arrives, I believe Samsung, Xiaomi, LG, and others won't be far behind. To make matters worse, this renewed interest in action cameras will likely convince Sony -- which already has a foothold in the market -- to fully focus on taking down GoPro.

A Foolish final thought
In conclusion, if HTC unveils an action camera next month, it will be a confirmation that GoPro is about to be besieged by lower priced devices with comparable specs.

GoPro bulls might believe that the company's efforts to market itself virally with a video channel will encourage brand loyalty, but I think they are overlooking the impact of the convergence of the mobile and action camera industries. If smartphone makers like HTC get serious about action cameras, GoPro will need to find innovative new ways to raise its competitive barriers.