Dividend investors are usually only concerned about high yields and growing dividend payments. However, the best dividend stocks also have the potential for the stock price to increase faster than the broader market. Stocks that have good dividend yields and are also undervalued give income investors an added bonus. Coca-Cola (NYSE:KO), Procter & Gamble (NYSE:PG), and Philip Morris International (NYSE:PM) fit the bill.

Coca-Cola's 3.1% yield is enticing on its own, but the stock price could also provide a good return if a few things go its way. Coca-Cola is primarily a soft drink company, but it is diversifying into other categories as well. Most notably, the company invested $2.15 billion in Monster Beverage (NASDAQ:MNST) and more than $1.25 billion in Keurig Green Mountain (NASDAQ:GMCR.DL) in exchange for equity stakes in both companies.

Keurig Green Mountain is also a natural partner for Coca-Cola. Not only will Keurig's new Cold brewer introduce Coca-Cola's beverages to a new channel, but its successful Keurig Hot system gives the soft drink giant exposure to the fast-growing single-serve coffee segment. If Keurig Cold and Keurig Hot 2.0 experience strong sales in the coming year, Coca-Cola's investment could pay off for shareholders.

Despite its diversification in the U.S. beverage market, Coca-Cola's long-term future largely depends on global beverage volume. The company's beverage volume grew just 2% last year, but more robust growth might be just around the corner. The global population consumed 94 servings per capita of Coca-Cola beverages in 2012 -- a 3% annual growth rate since 2002. A 50% increase in its beverage volume growth rate could send Coca-Cola shares higher in the coming years.

Not only does Procter & Gamble have an attractive 3.2% yield, it is also a chronic dividend raiser. Earlier this year, the company increased its dividend for the 58th straight year. With a 61% payout ratio, there's little doubt that Procter & Gamble will increase the dividend again next year -- and for many years after that.

However, investors who buy Procter & Gamble shares are getting more than just an almost-guaranteed 3.2% return. They're also getting a wide-moat company that may soon increase its profit margin for just 17 times forward earnings. That multiple might turn out to be misleadingly high as Procter & Gamble generates an increasing amount of its earnings in international markets, thereby reducing its effective tax rate. All else equal, this will allow the company to grow earnings faster than it grows revenue. 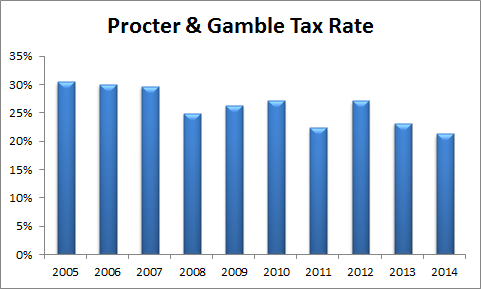 Procter & Gamble's tax rate has been declining for years as it shifts profits overseas. Source: Morningstar.

More than a cigar butt

If you think Philip Morris International only has a few more years of strong profitability left, you could miss out on a great investment opportunity. If the stock's 4.6% dividend yield isn't enough to get you interested, its valuation might. Philip Morris trades at a lower valuation than Altria Group (NYSE:MO) despite having better prospects.

As a result, Philip Morris' stock could be a steal since it trades at a lower forward price-to-earnings ratio (15 vs. 16) and the same yield (4.7 %) as Altria -- even though its prospects are better. If the market turns out to be wrong, investors who grab Philip Morris here could get a great dividend and even better capital appreciation.

There is no guarantee that Coca-Cola, Procter & Gamble, and Philip Morris International will beat the market, but investors who buy these stocks today will own three solid dividend stocks that may also be undervalued. For buy-and-hold investors, there's hardly a better combination.