Twitter is taking advantage of record low interest rates caused by the Fed's quantitative easing program, which keeps interest rates low. The Fed is expected to end the program by mid-2015, so Twitter is getting in while it still can.

With the addition of $1.8 billion to its cash and short-term investments, as well as its $1 billion in untapped credit, Twitter has about $5 billion at its disposal. While Twitter was rather vague about what the cash would be used for, stating "corporate purposes," it's a good opportunity for Twitter to make a big acquisition. Here are a few businesses Twitter might be looking to buy.

Flipboard
Twitter CEO Dick Costolo pointed out on the company's second-quarter conference call that a majority of Twitter's audience never logs in. One reason for that could be that Flipboard users are able to follow and click on tweets without logging in. The website claims to have 100 million active users, more than one-third of Twitter's total.This idea for a possible purchase comes from SunTrust Robinson Humphrey analyst Robert Peck. Flipboard is a web application that aggregates social and news content from all over the web, including Twitter.

Purchasing Flipboard would allow Twitter to advertise on one of its largest third-party platforms. Flipboard is already rolling out video advertisements, and it has an established display ad business.

Flipboard raised funding about 12 months ago at an $800 million valuation. Twitter would likely have to spend more than $1 billion to acquire the company outright.

StockTwits
Along the same lines as Flipboard, StockTwits is another third-party platform that integrates with Twitter. It sports an audience of 40 million people who are interested in keeping up with financial news.

StockTwits excels at something Twitter is just getting started with -- curated timelines. The company leverages a special hashtag that uses $instead of #. Simply type $TWTR into StockTwits, and you're treated to Twitter's stock price and chart followed by a stream of comments from around the web about the company and stock.

Twitter has been experimenting with curated timelines recently. It started this summer with the World Cup and recently created unique timelines for every NFL game. While these timelines didn't necessarily increase Twitter's registered users, they certainly increased engagement on the website. Earlier this month, CFO Anthony Noto said he believes he can sell ads on curated timelines at a premium to regular user timelines because users are expressing specific interests.

Acquiring StockTwits would give Twitter the means to offer curated timelines for every publicly traded company. 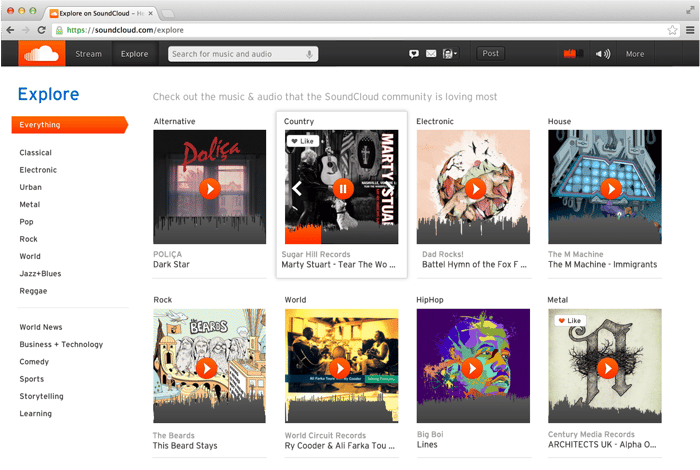 Twitter was reportedly in talks with SoundCloud earlier this spring before it walked away from negotiations with the streaming audio company. That doesn't mean Twitter doesn't still want to get a deal done. SoundCloud raised capital in January at a $700 million valuation, so its price tag could very well top $1 billion.

Twitter's past experiments with music have failed. It launched a music app last year, and shuttered it less than a year later. But sharing music is one of the most popular uses for Twitter's platform, and many use links to SoundCloud to do it.

Combining the two platforms could benefit both parties. SoundCloud would enhance Twitter's ability to draw new users interested in music. Additionally, it would give it a real entry in the increasingly popular music streaming market.

Under Twitter, SoundCloud would be able to take advantage of the social network's advertising inventory and current brand relationships. Currently, SoundCloud has limited advertising on its platform, mostly consisting of native ads. Twitter could improve its advertising, and also make some progress with major labels.

Lots of opportunities
These are just a few ideas for what Twitter might be looking to acquire with its new cash influx. Twitter may also look to invest in ad technology, something related to television, analytics companies, and mobile payments or mobile commerce.

If Twitter does pursue one or more acquisitions, to please investors it would need to show that it either expands its active user base or helps monetize its audience. Preferably, it can do both.