This may seem to be a bad time to consider owning a professional sports franchise. NBA owners are getting booted for making racially insensitive remarks. Owners in the NFL are feeling the wrath of sponsors that are threatening to bow out if players don't clean up their acts.

However, at the end of the day, you probably wouldn't turn down a chance to own a piece of a a pro sports team. It's something that many sports fans dream about. 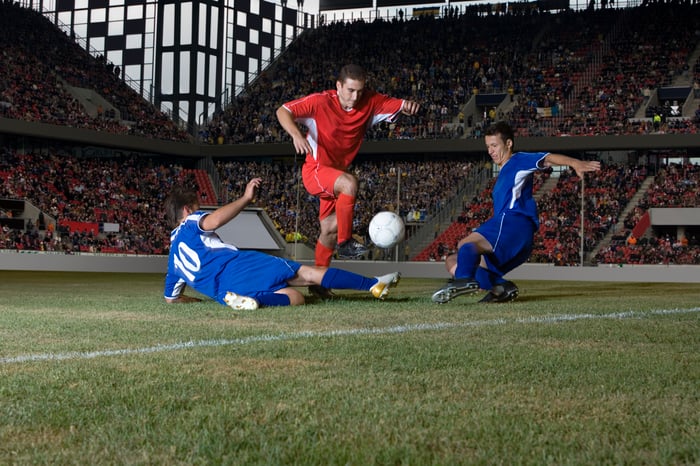 Well, there is a way to own a piece of some popular franchises. You won't get skyboxes. There will be no opportunities to rub elbows with celebrities. However, if you play your cards right, you may be able to eventually sell your stake to another fan at a higher price.

Liberty Media (NASDAQ:FWONA)
Liberty Media owns stakes in leading players behind satellite radio, concert promotions, and content creators. It also has full ownership of the Atlanta Braves and even owns five minor-league squads (the Gwinnett Braves, the Mississippi Braves, the Rome Braves, the Danville Braves, and the Gulf Coast League Braves) and a baseball training academy in the Dominican Republic.

Turner Field, home turf for the Atlanta Braves, is not part of the deal. It's leased.

Running a team isn't cheap, especially given the ever-rising player salaries and demands for guaranteed payouts. When the year began, the Braves had $133 million in guaranteed contracts. However, the teams also make more money as they demand more out of broadcasters.

Manchester United (NYSE:MANU)
Let's turn to soccer. Fans of the United Kingdom's iconic Manchester United soccer club got a chance to own a piece of the team when it went public at $14 a share two years ago. Soccer isn't as popular in the U.S. as other sports, but it's a pretty big deal worldwide.

The team points out that its number of Facebook followers has climbed from 34 million a year ago to 56 million today. With broadcasting revenue up 34% in fiscal 2014, it's safe to say that new domestic and international TV rights agreements are paying off.

Madison Square Garden generates revenue from the teams through ticket sales and broadcasting rights. It also cashes in on the famous stadium when the venue isn't being used by one of its teams by hosting and renting it out for other events. Revenue climbed 16% in Madison Square Garden's fiscal year ending in June.

Getting into the game
It should also be pointed out that the NFL's Green Bay Packers have been a publicly owned nonprofit corporation since 1923. However, owning a share is more of a keepsake than an investment. It does not appreciate in value, and there have only been five times -- 1923, 1935, 1950, 1997, and 2011 -- when the stock has gone on sale.

Investors looking for a piece of a team with a shot at appreciation will want to stick with Liberty Media, Manchester United, or Madison Square Garden.