Please ensure Javascript is enabled for purposes of website accessibility
Log In Help Join The Motley Fool
Free Article Join Over 1 Million Premium Members And Get More In-Depth Stock Guidance and Research
By Matthew DiLallo – Updated Oct 16, 2018 at 11:38AM

If you think it's America, you're dead wrong.

Well over a billion cows roam the earth today. Surprisingly, a third of them make their home in India. The reason that might come as a surprise is because most people living in India don't actually eat beef. In fact, according to the U.S. Department of Agriculture only about 3.8 pounds of beef and veal are consumed per person in India each year while the average American consumes just over 81 pounds of beef per year. The causes of this disparity also might be surprising to those that don't know Indian culture.

Where's the beef?
Cows are believed to have been domesticated in southeast Turkey over 10,500 years ago. It's thought that these early domestic cows came from as few as 80 progenitors, or the early descendants of cattle. Today cows are found all around the world, however the greatest percentage of cattle live in India, as it's home to over 330 million cows. Brazil is the home to the second largest number of cows, with more than 210 million living in the country. It's followed by China, which has just over 100 million cows. 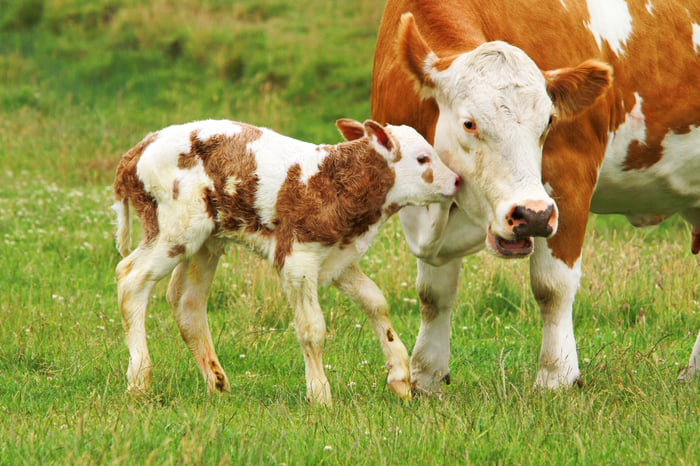 Despite its fondness for beef, America is home to just the fourth largest cattle herd in the world with just over 87 million cows living in the country. What also might come as a surprise given America's beef loving culture is the fact that it's actually not the largest per capita consumer of beef in the world. Brazil actually eats more beef than Americans; the average Brazilian consumes 86 pounds of beef, or five pounds more per year than the average American. Given that Brazil has more than twice the number of cows as America while 100 million fewer people live in the country, though, it certainly isn't all that surprising that more beef is consumed in the country. What is curious is why India has so many cows.

So, why does India have so many cows?
Cows have a number of useful purposes. They can be raised as livestock for meat or as dairy animals for milk, cheese, and even ice cream. Cows are also still used in some countries, including India, as draft animals to pull a plow or cart. Meanwhile, other products are produced from cows, such as leather, while cow dung can be used for fertilizer or even as fuel.

This overall usefulness is why the cow has developed such a significant religious meaning for Hindus. In Hinduism a cow is a symbol of wealth, strength, abundance, selfless giving, and full earthly life. Its sacredness dates back some 5,000 years when one of Hinduism's most important figures, Lord Krishna, is said to have appeared as a cowherd. This is why one of Krishna's holy names means "one who brings satisfaction to the cows." Other Hindu scriptures identify the cow as being the "mother" of all civilization as its milk nurtures the population.

In fact, milk still plays a central role in Hindu religious rituals, and it is also very important to the diet of Indians overall. So, with the world's second largest population at over a billion people the country needs a lot of milk, which is why it isn't surprising to learn that India is the world's largest milk producer.

Moreover, people in India also use a lot of what cows leave behind for both fuel and fertilizer. In fact, cow dung is such an important fuel in the country for cooking that it is estimated that an additional 35 million tons of coal would be needed in the country just to replace cow dung as a cooking fuel.

Because cows provide so much of what Indians need, their protection has become of high importance. This is why Mahatma Gandhi, like so many other Hindus, saw the protection of cows as being central to Hinduism. He once said that, "If someone were to ask me what the most important outward manifestation of Hinduism was, I would suggest that it was the idea of cow protection." This is why citizens can actually be put to death for killing a cow as in many states in India it is against the law to slaughter a cow for beef. While there is no national law against slaughtering a cow for beef, it makes it extremely difficult for non-Hindus to consume beef in the country. Given how useful a living cow is to Hindus and the sheer number of people living in the country, we can understand why India has so many cows roaming around.