While revenue and earnings have been slashed at Eli Lilly & Co. (NYSE:LLY) for the past year, investors who bet more recently on a turnaround have been rewarded with shares at a 10-year high and an admirable 3% dividend yield. 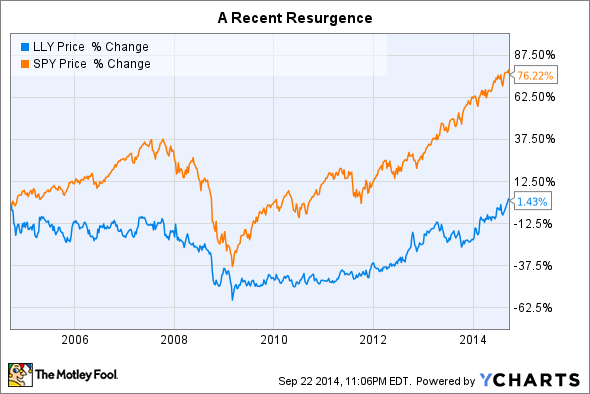 Several factors have contributed to this renewed optimism, including cost control measures and an anticipated return to earnings growth in 2015. While there is some merit to those arguments that could continue to send the stock higher, there are other factors at play that could just as easily hurt shareholders. It's worth exploring those factors in depth before deciding whether this ship can right the course.

While Lilly's revenue has already fallen 17% in the first half of 2014 compared with the same period in 2013 on the loss of patents for Cymbalta, Zyprexa, and Evista, yet another crucial moneymaker for the company could be on the chopping block. Humalog, Lilly's fast-acting insulin analog, brought in $2.6 billion in 2013, despite having lost patent protection in May of that year. Cheaper generic versions of Humalog have not yet hit the market in the U.S., though not for lack of trying. In fact, Biocon and generic-drug powerhouse Mylan have inked a collaboration to develop generic versions of Humalog, NovoNordisk's Novolog, and Sanofi's Lantus. While the developmental hurdles and still-murky regulatory landscape for biosimilar drugs may delay competition for some time, long-term investors should be aware of the enormous potential for additional top-line troubles.

Lilly hasn't been alone in its struggle to deflect the blows of patent expirations, but it has chosen a unique approach that differs from its industry peers. Many Big Pharma players have engaged in mergers and acquisitions of various sizes with the intention of bolstering pipelines and cutting costs, sometimes by rebalancing the business to reduce tax rates. With the exception of the acquisition of Novartis Animal Health and smaller bolt-on acquisitions, Lilly has chosen the opposing model of internal innovation and organic growth. This business model leaves little room to debate the efficiency of Lilly's capital allocation, as R&D expense can be compared directly to the company's success in regulatory approvals, without debating the merits of acquisitions and capital expenditures. 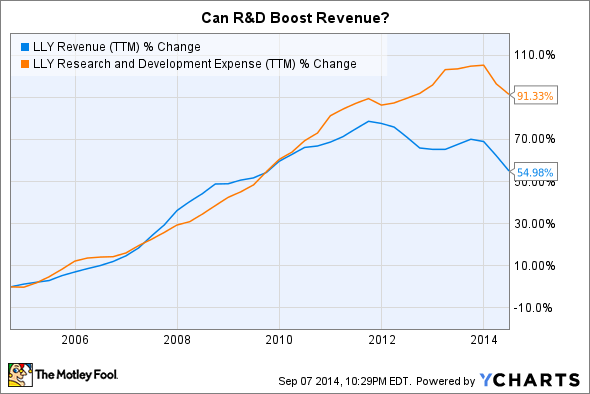 For the past 10 years, R&D spending roughly kept pace with revenue growth until patent losses impaired that growth a few years ago. Now, R&D spending as a percentage of revenue has increased, suggesting that we look more closely at the efficiency of Lilly's development strategy.

According to Matthew Herper of Forbes, Eli Lilly ranked as the seventh highest spender on R&D per new drug at $6.7 billion adjusted for inflation over a 10-year period. A major threat to Lilly's future financial health is its ability to improve the return on R&D investments. Lilly's model will require disciplined management of pipeline assets to stimulate growth while keeping costs at bay. Management has yet to prove that it can accomplish that goal, and has even inspired doubt with large failed investments in high-risk candidates such as Alzheimer's drugs solanezumab and LY2886721. Questions about capital allocation and return on R&D investment should not be taken lightly, particularly for a company with a dividend that has been stagnant since 2009.

For a company leaning on its history of innovation at a time of great turbulence, Eli Lilly has a relatively uninspiring pipeline. A peek at Lilly's website shows a pipeline stocked with several late-stage candidates. A closer look at the lineup, though, is fairly underwhelming. In fact, Foolish colleague Sean Williams crowned Lilly as having "Pharma's Most Perilous Pipeline" -- a title with which I agree.

Lilly's most developed candidates don't do much to differentiate the pipeline from other, more robust Big Pharma pipelines. Take AstraZeneca's (NASDAQ:AZN) pipeline for comparison. Facing similar revenue declines and an uncertain future, AstraZeneca's pipeline is loaded with drug candidates across multiple areas of medicine, with the built-in strategic flexibility of oncology combination therapies and partnerships. As peers such as AstraZeneca boast truly innovative personalized approaches to treating disease, Lilly's late-stage pipeline lacks the firepower needed to replace its lost revenue. While it is set to compete in some very large markets, namely diabetes and oncology, these markets will become increasingly crowded.

Even its most advanced oncology candidate, necitumumab, will compete in an established market of Epidermal Growth Factor inhibitors, should the FDA see through an increased risk of blood clots and approve an upcoming regulatory filing. Likewise, Cyramza (ramucirumab) has also been less successful than originally hoped, despite its recent approval for gastric cancer and success in trials for colorectal and non-small-cell lung cancers. That drug failed trials for breast and liver cancer, two important markets for a drug that improved median overall survival in gastric cancer patients by only less than two months.

It is of course possible that Eli Lilly & Co. will return to earnings growth in 2015 and beyond, but several factors stand in the company's way that could stunt growth and hurt investors looking to play the turnaround game. With a comparatively uninspiring pipeline facing the threat of future revenue declines and a bloated cost structure, the odds of a prompt recovery are less than certain. Next time, we'll take a closer look at the balance of bull and bear arguments, and pit Lilly's prospects against other Big Pharma names to see whether now is the right time to invest in Eli Lilly & Co.