Will 3D printing become a part of your lifestyle? Source: 3D Systems.

When 3D Systems' (NYSE:DDD) second-quarter earnings fell short of estimates, and the company also reported a decline in its gross profit margin, investors didn't take too kindly to the results. Although reading the headlines may have caused some investors to feel less confident about 3D Systems' future prospects, the headline story alone doesn't always tell the whole story about a company's earnings. Listening to the conference call can give investors an opportunity to hear directly from management and gain additional insight into why a company's results didn't live up to expectations. Below are five of the most important things 3D Systems' management highlighted during its second-quarter earnings conference call.

1. Gross profit margin declined for a number of reasons and should recover soon.

Specifically, we expect to begin to see [a] materials margin recovery in the third quarter and further expansion thereafter. We [expect to] see a rebound in printers margin beginning in the third quarter as we work through the product transition and [also a] complete recovery to historic printer gross profit margins in the fourth quarter. And we expect continued service margin expansion driven by higher Quickparts margin contribution, continued software revenue growth and our expanding healthcare services.

In other words, it appears that the headwinds 3D Systems faced during the quarter will likely be short-lived, and investors keeping track at home should watch to see whether gross profit margins begin to recover in future quarters. 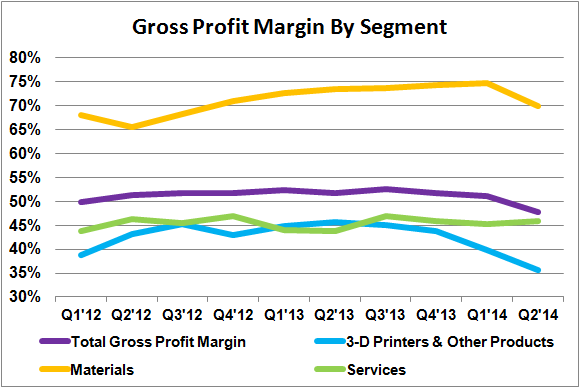 2. 3D Systems' record backlog negatively affected its organic growth rate, which fell to 10% from 28% in the first quarter.

Several factors contributed to the expansion of our order book [backlog]; first, higher demand for our direct metal printers that continues to rise faster than we could add manufacturing capacity; second, booked orders for polymer printers that were scheduled for later deliveries by our customers; and finally, our decision to postpone shipments of new consumer product to improve user experience laid to an expanded backlog of our consumer orders. These factors shifted a portion of our organic bookings into future periods and temporarily suppressed our organic growth rate to 10% during the quarter. 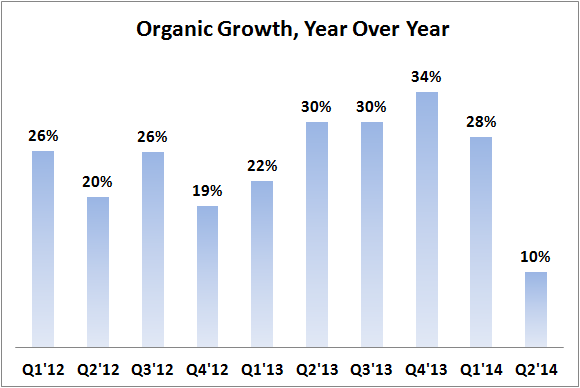 In a move to improve the user experience, 3D Systems' management made the conscious decision to delay the shipment of several upcoming consumer-oriented 3D printers during the quarter. As a result, consumer 3D printing revenues were held to a modest $7.4 million during the quarter, a decrease of 23.7% sequentially, but management believes that the short-term hit it took on consumer revenues has the potential to improve the quality of its brand overall. As far as what kind of user enhancements were made, Reichental explained:

We're talking about differentiating features like the need to have automated setup in all when you plug so that you can play. We talk about enhanced multicolor printing capabilities. We're talking about print speed and print fidelity areas that we determined when we compared and contrasted our user experience with what's out there today that with the guidance and input from dozens of data testers we determine that if we take a couple of months to push harder we could have the superior user experience. And we decided to take the time to do that.

4. Demand for 3D Systems' metal 3D printers continues to outpace the speed at which it can add manufacturing capacity.

In recent quarters, 3D Systems continues to highlight how it can't keep up with demand for its metal 3D printers, despite continuing to add more manufacturing capacity. The trend didn't change in the second quarter, and Gregoire weighed in:

The facility Gregorie is referring to will have an additional 200,000 square feet of manufacturing capacity, allowing it to better capitalize on the explosive growth that metal 3D printing has experienced.

In an effort to better cater to the needs of large-scale manufacturers, 3D Systems is expected to debut a significantly larger-format metal 3D printer this November at EuroMold 2014, a conference known for being the largest display of industrial 3D printers in Europe. During the earnings call, Reichental briefed investors about when the larger-volume printer is expected to become available for sale:

And finally remember that our larger direct metal printer that we've been developing all year is going to debut at EuroMold 2014 and be available for sale in the first quarter of next year. And that is on track to be completed timely and commercialize.

Large-scale manufacturers like General Electric could be interested in a larger-format metal offering from 3D Systems; it would allow GE to consolidate the number of machines it would need to 3D-metal-print 45,000 fuel nozzles a year for its upcoming Leap jet engine.