Why has the release of the year's biggest new property so badly damaged Activision's valuation?

It's been roughly two weeks since the launch of Activision Blizzard's ( ATVI 2.04% ) highly touted Destiny, and early indicators are mixed. Endowed with a sky-high production and marketing budget of $500 million, the game was put forth as a potentially revolutionary title that would continue to evolve and generate  revenue well after release. Now, it's looking like the game may have trouble living up to expectations, and shares of Activision are down approximately 9% since the game's release, equating to a $1.5 billion decline in its market capitalization. 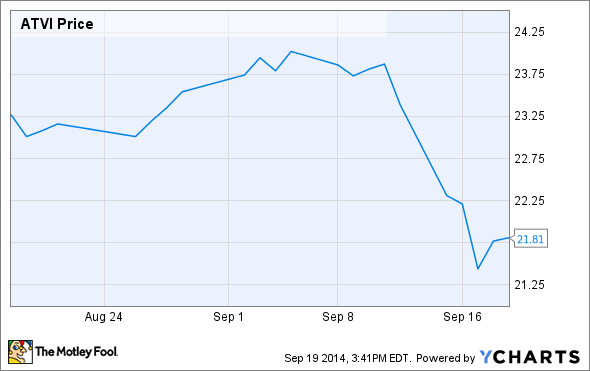 What does the less than spectacular Destiny launch mean for the future of Activision? Did Sony ( SONY 0.76% ) make the right move by teaming with the publisher to market the game? Let's take a look.

The numbers
According to Activision, Destiny generated $325 million in sales to consumers within its first five days on the market. With a price in the $60 range, this comes out to over 5 million copies sold, which was enough to make good on CEO Bobby Kotick's promise that the title would become the biggest new IP in gaming history. Ubisoft's 2014 release Watch Dogs was the previous record holder, having sold more than 4 million copies in its first week.

While the launch of Destiny hurt Activision Blizzard's valuation, it's apparently doing great things for sales of Sony's PlayStation 4. The platform holder partnered with Activision in the marketing of the title and released a white version of its popular new console bundled with the season's biggest game. Sales of the system in the U.K. quadrupled during the week of Destiny's release, which was enough to make it the system's best-selling week in the territory this year. The game even had a strong effect on PS4 sales in Japan, where home consoles are struggling, causing numbers to more than triple over the previous week. It's not unreasonable to expect similarly impressive hardware bumps in other territories.

How to read Destiny reviews
Review scores for Activision's latest major release can be fairly described as disappointing. While the Sony PlayStation 4 version of the game currently has an otherwise respectable 77% critical average on review aggregate site Metacritic, scores are notably below expectations for a title of Destiny's budget and stature. Review scores matter in the console gaming industry, so much so that publishing contracts often include bonuses given for achieving a certain aggregate score. Reports suggest that developer Bungie stands to lose about $2.5 million in bonus payouts from publisher Activision for failing to deliver a product that matched or surpassed the desired average review score.

Failing to win over critics as expected is a significant stumble at an early stage in Destiny's product lifecycle, but reviews may not provide an ideal indication as to what the future holds for a game built around updates and expansions. Many reviews of the game were published before the release of a new gameplay mode that added a notable amount of content to the package. Additionally, the gaming press has faced mounting criticism about the validity of reviews and coverage in recent years, and these controversies appear to have recently reached a fever pitch, so it's possible that Destiny debuted in a relatively inhospitable climate. That's not to say that the game doesn't deserve criticism, but a comparison of the 85% Metacritic score of Electronic Arts' famously troubled Battlefield 4 to Destiny's 77% aggregate does raise the question of whether standards have changed in the last year.

Does Destiny have a bright future with consumers?
Destiny seems to have secured a large and enthusiastic audience, but the consumer-level response is undoubtedly more mixed at this stage than Activision and shareholders would like. This is a title that was built with a 10-year franchise plan in mind and positioned as the next big thing. Anything less than massive commercial performance and near unanimous praise was bound to be a disappointment, and Activision and Bungie will likely need to alter elements of their game if the franchise is to achieve its intended success. That the game needs more content, or that its social features need to be improved are recurring points of criticism among consumers less satisfied with the game.

Much of Destiny seems tailored to the hard-core player, but the title currently lacks many of the means of in-game monetization that would allow Activision to maximize revenue generated from this set. Meanwhile, a substantial amount of the game's content is inaccessible to less dedicated players. As such, the game's balance will likely need tinkering with if it is to sustain a healthy ecosystem.

Foolish thoughts
At the moment, Activision Blizzard looks like a victim of its own hype. Destiny is off to a strong start by most reasonable metrics, but expectations demanded a near-perfect launch. The product simply isn't all the way there yet. Because of Destiny's evolving nature, its $500 million budget was never going to be wholly represented at the game's launch, but Activision and Bungie have to implement intelligent updates to ensure that it sustains a healthy player base.

The approximately $1.5 billion decline in the publisher's valuation may be the result of overreaction, but Activision will have to prove it through masterful post-launch handling of its premier new property. Whether or not it manages this feat, an early November earnings report and the December release of the game's first expansion pack should provide a much clearer picture of what the future holds for Destiny and Activision Blizzard.