Rite Aid Corporation (NYSE:RAD) gave investors more bad news last week when it revealed that it's still struggling to overcome headwinds tied to rising demand and falling reimbursement for generic drugs. The revelation casts doubt on whether the C-suite has a grasp on the complexity associated with its recently launched generic drug purchasing and distribution deal with McKesson, and shakes investor confidence in the company's ability to deliver on its earnings promise; particularly given that Rite Aid has cut its earnings forecast twice since June.

With shares nosediving nearly 20% in the past few days, let's look closer and see if we can make some sense out of this stock's wild ride.

A rocky road?
There's little question that 2013 marked a dramatic turnaround for Rite Aid, the nation's third-largest pharmacy retail store operator. Just a few years ago, the company was struggling under the weight of interest payments tied to its 2007 acquisition of Eckerd.

That deal significantly expanded Rite Aid's store count, but it also saddled Rite Aid with too many stores operating in overlapping markets. As a result of challenges tied to integrating Eckerd, which were compounded by headwinds tied to the recession, Rite Aid posted negative net income of $500 million in 2010. However, thanks to cost-cutting and a restructuring of the company's debt, net income has since swung back positive, reaching nearly $250 million last year. 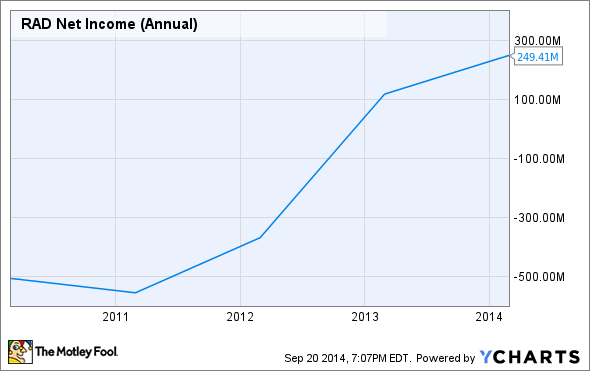 However, that rebounding profitability may have led to investors setting the bar too high. Investors have walked away disappointed after each of Rite Aid's past two quarterly reports.

In the fiscal first quarter, Rite Aid reported net income of $41 million, down from $89 million last year, and cut its full year earnings per share forecast to between $0.30 and $0.40 from between $0.31 and $0.42. In the fiscal second quarter, net income surged back, climbing to $128 million from $33 million a year ago, but Rite Aid again cut its full year forecast, this time dropping it to between $0.22 and $0.33 per share.

Rite Aid's growing earnings pessimism stems in part from delays in reaping benefits tied to its generic drug purchasing and fulfillment deal with McKesson. That deal was supposed to free Rite Aid from the burdens of maintaining inventory and paying for warehouse to store distribution, savings that have yet to pan out as hoped. Since generics account for roughly 80% of all the scripts filled by the company, delays in getting the program up to speed, coupled with increased drug demand at lower reimbursement rates from Medicaid patients, are squeezing Rite Aid's profits.

Brightening future?
Now that Rite Aid's shares have lost their luster, share prices could head higher during the next year if headaches tied to the McKesson contract fade.

During the fiscal second quarter, Rite Aid said that it is starting to see some synergies that may suggest better times ahead. If that's true, investors would be able to shift their attention back to Rite Aid's growth plans, including its strategy for in-store healthcare clinics.

In February, Rite Aid acquired RediClinic, a chain of 30 health care clinics operating in H.E.B. grocery stores in Texas. The deal gives Rite Aid exposure to a key retiree market -- Rite Aid is conspicuously absent in both Texas and Florida --  and shortens Rite Aid's learning curve as it begins to play catch-up to CVS Health and Walgreen, both of which operate hundreds of in-store clinics already.

Fool-worthy final thoughts
Investors have remained cautious about Rite Aid this summer over worries that the other shoe may drop. So far that caution has paid off. However, it's certainly possible that prescription volume will head higher, not lower, in the wake of healthcare reform, shares could recapture some of the ground they've lost, but only if management can regain investors confidence and deliver the savings its promised.

Is There Hope for Rite Aid Corporation Stock After It's Horrendous Quarter? @themotleyfool #stocks $RAD Next Article
Current