Investors in chip specialist Texas Instruments (NASDAQ:TXN) don't need a calculator to assess their stock's performance -- it's handily beaten the S&P 500 over the past five years as the economy has recovered:

Texas Instruments is hardly the only chip-maker to soar in a very tech-friendly recovery, but after more than half a decade of largely uninterrupted growth, investors have to be wondering just how much higher its shares can go. Every stock has its pros and cons, but TI has several important things in its favor that could keep its stock on the rise for years to come. Let's take a look at three key reasons TI's growth can continue over the long haul.

TI's fundamentals are stronger than you think
One popular knock against TI is that its earnings have yet to recover to 2011's highs, but even so, the past five years have produced more growth in TI's EPS than in its share price: 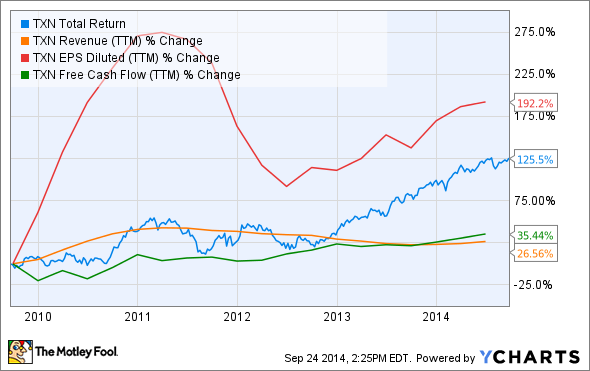 The dip in EPS from 2011 through mid-2012 isn't unique to TI -- rivals Intel, Cypress Semiconductor, and STMicroelectronics all suffered weaker earnings through 2012. However, thanks to the rebound that began in mid-2012, TI's bottom line is now nearly three times larger today than it was at the end of 2009. Some of this is because of share buybacks, but TI's nominal net income is still 150% higher over this time frame, surpassing its share price growth.

But wait! TI's revenue growth has been modest, and its free cash flow has grown far less than its earnings. In some situations, that would be a warning flag, but TI's free cash flow is currently running roughly $900 million higher than its net income, and this divergence is the largest (and has persisted the longest) in this century for TI: 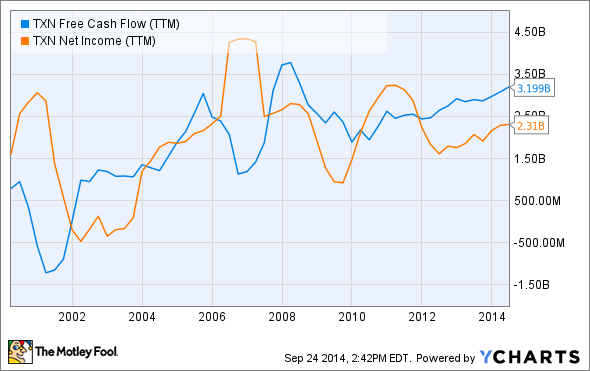 That swelling free cash flow has allowed TI to safely undertake a huge share buyback program while sustaining one of the tech industry's higher dividend yields. Over the past four quarters, its $3.2 billion in free cash flow has been almost exactly what was needed to repurchase $2 billion in shares and pay out $1.3 billion in dividends (the chart below represents dividends paid as a negative number): 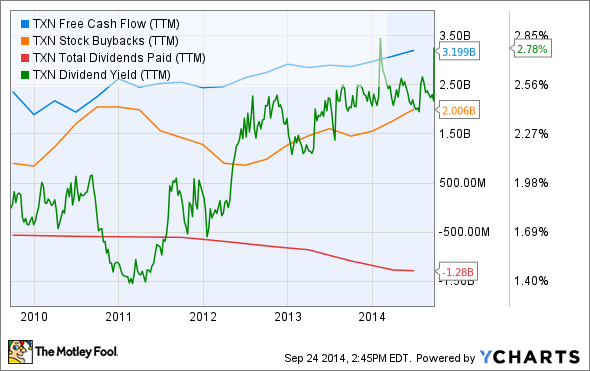 Investors looking for steady and sustainable growth certainly have it in TI, which has paid dividends without fail since 1962, with increases to the payout occurring in each of the past 10 years. Over that time, its dividend payout has risen 1,260%! 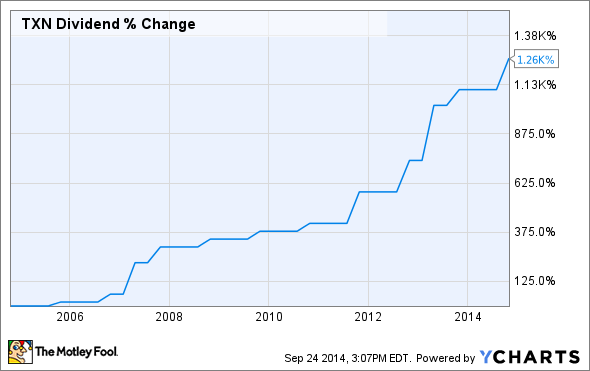 TI is the global leader in analog semiconductors
Most (60%) of TI's revenue comes from its analog semiconductor segment. This segment is enormously diversified, as the company estimated that it had 100,000 customers for its analog products last year. At $7.2 billion in revenue in 2013, TI's analog segment accounted for 18% of the roughly $40 billion worldwide analog semiconductor market, which it boasts is the largest share of any company in the space. Over the past five years, that share has grown:

TI's analog revenue was $3.8 billion for the first half of the year, which annualizes out to $7.6 billion for the full year, a 6% year-over-year improvement. This comes in below the company's current guidance for overall revenue growth of roughly 8% for the current quarter, and also below the analog segment's reported year-over-year growth rate of 14% for the second quarter.

Stable, high margins in an expanding segment will be critical to TI's financial success going forward. The money it earns from analog chips will help it boost another segment that could be its next cash cow. That brings us to the third reason to expect more growth in TI's share price...

TI is positioning itself to dominate the Internet of Things
Anyone who's followed TI over the past couple of years has seen one phrase crop up over and over: "Internet of Things," or IoT. The company's got a landing page for its IoT initiative, which tells us that 50 billion devices should be connected by 2020, and also highlights TI's IoT "cloud ecosystem," which is just another way of saying "operating system" in an age when that term has become somewhat antiquated. Its launch partners included mobile chip developer ARM Holdings and IBM, both of which could benefit from the development of a dominant IoT operating system in different ways.

One of TI's many microcontrollers.
Source: Texas Instruments.

TI already offers a range of control, connectivity, and power-management solutions for IoT devices, some of which are highlighted on its IoT landing page. Both of TI's core segments -- analog and embedded processing -- can provide key pieces to the IoT puzzle, so it may be nearly impossible to assess the IoT impact on TI's finances until the company breaks out this line separately or offers hard data during its quarterly reports and conference calls. But much of the growth in IoT functionality will come from the embedded processors that control wireless connectivity and the microcontrollers that serve as the brains of each thing in the Internet of Things.

TI's embedded processing segment has lagged its analog segment in recent years, with top-line growth of just 18% from 2010 through 2013 compared to the analog segment's 20% growth rate, and its operating margin of 11.5% for the first half of 2014 also lagged the analog segment's heftier 30.3% operating margin. However, leadership in IoT chips sould help bring the embedded segment up -- or past -- the analog segment in time, as the high fixed costs of semiconductor manufacturing are best suited for companies that can produce (and sell) chips at massive scale. TI executives mentioned that they believe they're presently in sixth place in the microcontroller market, which presents a huge opportunity for growth -- if the company can capitalize on it.

Three good reasons?
TI rules the roost in analog chips today, and this position has made it one of the most financially stable chip-makers in the world. With any luck (and a lot of hard work), TI will also reward shareholders over the long run by claiming its place atop the very crowded heap of would-be Internet of Things hardware kings. These three things give TI investors reason for optimism today, but will they be enough to justify giving TI's shares a place in your portfolio? We're sure to find out as the IoT matures over the coming years.