For individuals willing to work hard but work for themselves, franchising has long held an allure as a limited-risk opportunity.

It's not no-risk, and franchising isn't a get-rich quick scheme by any stretch -- it can be quite costly to buy into a concept, reiterating the old saw that it takes money to make money -- but there several good reasons to consider the option, and just as many to dissuade you as well.

We're not telling you any one restaurant is better than any other if you're looking to get into franchising. But for entrepreneurs and investors researching this avenue of business, this is a top company that uses the franchise model and could be one you'd want to consider. 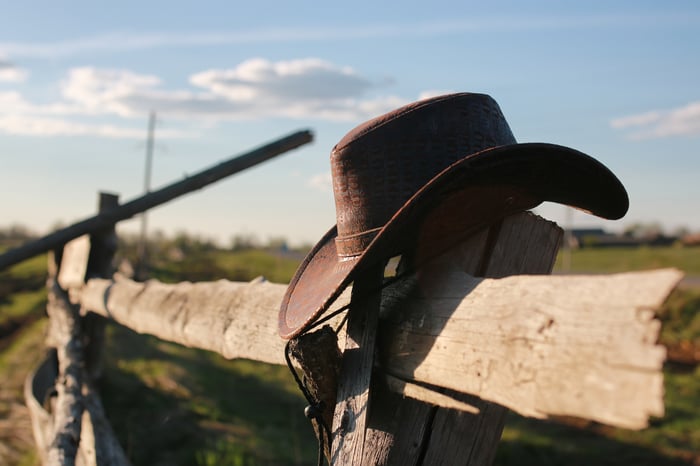 All hat and cattle
Even though it's based in Kentucky, steakhouse chain Texas Roadhouse (NASDAQ:TXRH) goes big, just like everything in its namesake state. It requires its franchisees be well-heeled to begin with: You not only need $3 million minimum in liquidity (that's the ease with which you can convert your assets into cash), but your minimum net worth needs to be at least $6 million, too.

That certainly rules out the chances that your average workaday wage slave will leap into this business anytime soon.

You should also have proven experience running restaurants before dialing up the chain, and if you're really interested in making the cut, you'll be wanting to operate more than just a single Roadhouse restaurant. A multi-restaurant development plan is high on the list of the steakhouse's preferred candidate criteria.

By the numbers
That exclusivity, though, could help you turn your investment into a successful opportunity.

It already has agreements in place to open more steakhouses in eight countries in the Middle East over the next 10 years (five are already operating), and last year it signed a franchise development agreement for the development of the concept in Taiwan over a five-year period.

While Texas Roadhouse has enjoyed an 8% compounded rate of growth in revenues over the past five years, last year they were up 11% from 2012 and it has proved itself to be one of the most popular steakhouse destinations in the country, placing second only to The Capital Grille, operated by Darden Restaurants (NYSE:DRI), which also runs the Longhorn Steakhouse.

Similar in size to the Roadhouse with over 460 restaurants, Longhorn has been one of Darden's more successful concepts, and like its rival, it's looking to expand internationally through franchising throughout most of the Middle East (but also Latin America).

The biggest steakhouse operator is Bloomin' Brands' (NASDAQ:BLMN) Outback Steakhouse, with some 944 restaurants, about 155 of which are franchised.

So buying into the Texas Roadhouse franchise also means you'd be buying into a tested, proven concept, one that is growing. 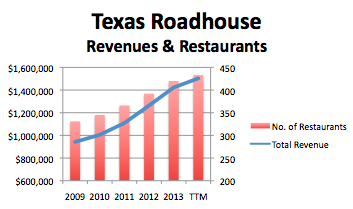 Selling the sizzle
According to the market researchers at Technomic, the top 10 steakhouses in the U.S. generated over $8 billion in sales in 2013, an average 7% increase, that led them to increase their footprint by 6%. And where the top full-service chains posted just a 2.4% increase in U.S. sales last year, the steakhouse segment surged some 6.2%.

But it's not as if it's without risk. Restaurants do close, the economy can weaken once more, and beef prices today are at record levels.

That may mean your expenses will rise and consumers will become leery of dining out at steakhouses, fearing the premium paid will be too large. Buying a franchise may entail less risk than starting up a business of your own, but it's still possible to lose your entire investment.

Treated like royalty
The franchise business model has been a boon to entrepreneurs and investors. Forbes found that the top 45 franchise stocks outperformed the S&P 500 in 2012 by nearly 2-to-1, generating returns of 23.2% compared with the index's 13.4%.

But it's not for everyone, and you need to consider your own temperament, your finances need to be in order (and sometimes be substantial), and if you're the creative type, the restrictions franchisors place on franchisees may feel constricting, claustrophobic even. You need to do your homework.

If that still sounds like a business you'd like to operate, however, Texas Roadhouse just might be one place where you should start your due diligence.