YPF stock has delivered extraordinary returns for investors, rising more than 80% over the last year. The bull run could continue over the long term, but on the other hand, the risks should not be underestimated in this particular investment case.

Argentinean integrated energy company YPF ( YPF 4.45% ) has risen by almost 80% over the last year, as investors are clearly enthusiastic about the company's massive opportunities for growth in shale oil and gas production over the long term. In addition, the possibility of a changing political landscape in Argentina after the presidential elections next year seems to be providing a powerful tailwind for Argentinean assets in general. These are valid and important bullish drivers for investors in YPF stock over the years ahead.

On the other hand, it's important to give proper considerations to the risks when analyzing a company such as YPF, which is exposed to considerable macroeconomic uncertainty.

Limited access to financial resources
Argentina's debt saga is getting more complicated by the day. The country has a long-standing legal dispute with creditors who didn't accept the debt restructurings in 2005 and 2010. Approximately 93% of that debt was successfully restructured, so hold-outs represent a relatively small group among creditors, however this conflict is having huge economic and financial repercussions for the country.

U.S. Manhattan District Judge Thomas Griesa ruled in 2012 that Argentina can't make payments on its restructured debt unless it also pays hold-outs. This triggered a default on part of the country's performing debt in July of this year.

The Argentinean government is trying to circumvent U.S. courts by replacing Bank of New York Mellon as trustee for some of its restructured debt with local Banco Nacion Fideicomiso, while implementing a bond swap in order to pay restructured creditors in Argentina under its local laws. Judge Griesa has recently found Argentina in contempt of court because of this maneuver, so things are clearly not moving in the right direction when it comes to restoring Argentina's access to international capital markets.

Being majority owned by the Argentinean government, YPF's access to global capital is severely limited by this situation. According to management, the company ended the second quarter with a cash position that fully covers debt payments over 18 months. Besides, YPF believes it will be able to easily refinance debt maturities over the next couple of quarters, as they are mostly bonds issued in the local market.

Still, even if the company's financial solvency is not at risk, YPF operates in a capital intensive industry, and access to financing is a crucial variable to consider when evaluating its ability to successfully expand and capitalize growth opportunities in the years ahead.

The economic crisis in Argentina
The Argentinean economy is contracting, inflation is roughly 40% annually according to private sector economists, the currency is rapidly depreciating, and employment figures are deteriorating. In this context, gasoline sales volumes are declining, which could have a considerable negative impact on YPF's profitability in the mid-term. 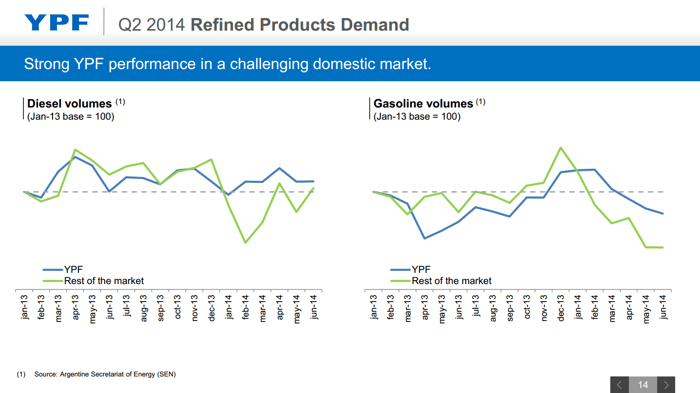 Being a market leader in Argentina, the company is doing a sound job of outperforming the competition in a challenging environment. However, as long as the pie is shrinking, owning a big piece of the pie is not a particularly promising business.

Demanding valuation
When comparing valuation levels for YPF versus other Latin American integrated energy players such as Brazilian Petrobras ( PBR 1.13% ) or Colombian Ecopetrol (NYSE: EC) in terms of ratios such as P/E or dividend yield, the company is more expensive than its peers.

YPF also trades at a premium valuation versus names like Total ( TTE 2.61% ) and Chevron ( CVX 1.57% ), which are considerably bigger companies based in developed countries, which means substantially lower risks for investors.

YPF will need to generate superior growth rates over the coming years in order to justify its valuation premium, which is a plausible scenario considering Argentina seems to have some of the biggest shale oil and gas reserves in the world and YPF is in a privileged position to capitalize on those opportunities if the right conditions are provided.

On the other hand, current valuation levels provide little downside protection if things don't work out as expected for investors in YPF.

Key takeaway
Don't get me wrong -- I believe there is a considerable chance YPF may deliver substantial returns for investors over the long term, and YPF stock can be a convenient investment for those who can handle the volatility. However, the risks are also way above average, so investors in YPF need to be ready to withstand some serious uncertainty in the coming months.