We all know “The Avengers” as a huge winner for Disney. You may be surprised just how much more Marvel contributes today. 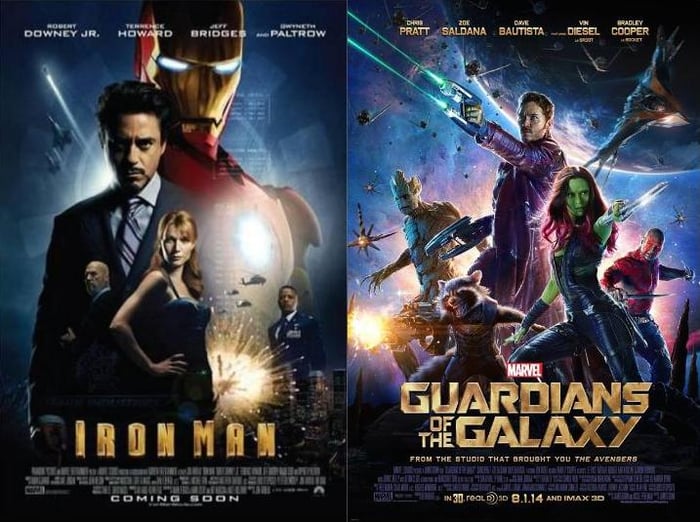 Iron Man and Guardians of the Galaxy are about neck-and-neck in terms of their overall earnings for Disney. Credit: Marvel Entertainment.

You know those headlines that proclaim that Guardians of the Galaxy is now out-earning Iron Man? Turns out they aren't quite right. By my math, the Golden Avenger is still slightly ahead:

Why even go through this exercise? To prove that there's still a fair amount of misunderstanding when it comes to Marvel's impact on Disney's (DIS 0.83%) Studio Entertainment business. Here are four more things you might not know.

1. The Avengers is 75 times more profitable than Captain America: The First Avenger!

When you add in $216 million from home video sales (source: The-Numbers.com), Marvel's The Avengers clears an estimated $621.3 million in gross profit versus just $8.2 million for Captain America: The First Avenger. Why the disparity? First Avenger was the last movie under Marvel's original distribution agreement with Viacom's (VIAB) Paramount Pictures. The deal allowed the studio to forgo marketing costs in exchange for an 8% to 10% cut of the gross and the lion's share of DVD, Blu-ray, and download sales. This agreement allowed Marvel to transfer a decent amount of risk over to Paramount, but accept less revenue from the film. Disney has since repurchased the rights.

2. The last five Marvel Studios movies account for over 90% of the profits earned since Iron Man.

Sound crazy? Here's why it isn't: Marvel Studios didn't control distribution for those first five films, and DVD, Blu-ray, and digital sales can be remarkably profitable. Look at The Avengers. By my math, over a third of the film's estimated gross profit traces to home video. Captain America: The Winter Soldier and Guardians of the Galaxy should enjoy similar success in this area, creating a nice windfall for the Studio Entertainment segment leading into next year's Avengers: Age of Ultron.

Like any studio, Disney has had its share of big-budget busts. What we tend to forget is that big winners generally overshadow big losers. Take Guardians of the Galaxy. At $318.6 million domestically, Marvel's newest space epic has made four times as much from U.S. theaters as John Carter did in 2012. Want a more direct comparison? The Lone Ranger tanked last year, yet Disney's Studio Entertainment segment still earned $836 million in operating income -- a 54% improvement over calendar 2012 and one of the best totals we've seen in years. Franchise extender Iron Man 3 and franchise starter Frozen -- both of which earned over $1 billion worldwide -- kept a lid on the masked man's influence.

4. Only one out of the 10 Marvel Studios movies has failed to produce a box-office profit.

By my math, the lone loser from Marvel Studios is The Incredible Hulk. And that's only at the box office. Factor in merchandising and product placement, among other sweeteners, and it's possible that the green giant put some green in Marvel's coffers. Whatever the final tally, the point is that a 90% hit rate is remarkably rare in Hollywood.

Setting the pressure gauge to "Ultron"

All of which brings us to Marvel's next try, Avengers: Age of Ultron, which arrives in theaters on May 1, 2015. What can we expect? Here's the official synopsis:

Marvel Studios presents Avengers: Age of Ultron, the epic follow-up to the biggest superhero movie of all time. When Tony Stark tries to jump-start a dormant peacekeeping program, things go awry and Earth's Mightiest Heroes, including Iron Man, Captain America, Thor, The Incredible Hulk, Black Widow, and Hawkeye, are put to the ultimate test as the fate of the planet hangs in the balance. As the villainous Ultron emerges, it is up to the Avengers to stop him from enacting his terrible plans, and soon uneasy alliances and unexpected action pave the way for an epic and unique global adventure.

Last time, bringing that team together produced $1.5 billion at the box office and over $200 million in home video sales. Will we see those sorts of numbers again? Better? Consider the data here and then leave a comment below to let us know where you stand.

Tim Beyers is a member of the Motley Fool Rule Breakers stock-picking team and the Motley Fool Supernova Odyssey I mission. He owned shares of Apple, Google (A and C class), Netflix, and Walt Disney at the time of publication. Check out Tim's Web home and portfolio holdings, or connect with him on Google+, Tumblr, or Twitter, where he goes by @milehighfool. You can also get his insights delivered directly to your RSS reader.

The Motley Fool recommends and owns shares of Apple, Google (A and C class), Netflix, and Walt Disney. We Fools don't all hold the same opinions, but we all believe that considering a diverse range of insights makes us better investors. The Motley Fool has a disclosure policy.