Investors in Enerplus were pretty euphoric just a few months ago, but the tune has changed awfully quick in these past few months.

Investors who piled into shares of Enerplus (ERF -0.50%) earlier this year appear to be getting cold feet. After shares skyrocketed 44% earlier in the year, the company is now only up about 8% and is pretty much on par with the performance of the S&P 500. Let's take a look at why investors seem to have gone from jubilation to judgmental in a matter of a few months and whether investors should take another look at Enerplus for the long run.

The knee-jerk reaction to Enerplus' rise and fall is to always look at what has happened to the price of oil. No matter how good your operations are, if your business is centered around the production of oil and gas, then shares are going to be affected by the price of oil. In the case of Enerplus, this has been taken almost to an extreme. When there is a $5 change in the price of WTI, Enerplus estimates that it results in a swing in cash flow of almost $13 million. So as we have seen domestic oil prices drop $17 in the past few months, you can understand why investors are getting a little skittish.

To compound this problem, the appeal of investing in Enerplus is the high dividend that it pays on a monthly basis. For Enerplus and other companies that have a similar appeal, you need to have a steady, reliable revenue stream. To help ensure some stability, most companies hedge the price of their production through futures contracts. Here is an example of one company that uses this technique extensively: LINN Energy. 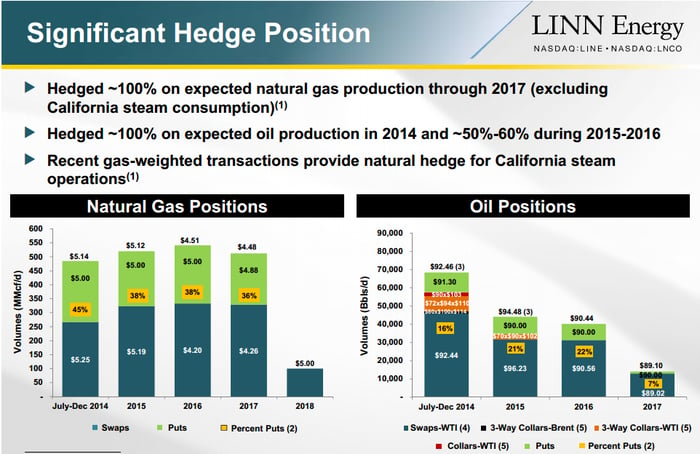 Basically, LINN's management is saying they are willing to forego the chance of higher gas prices for the stability of knowing its selling price for all of its natural gas until 2017, and up to 50%-60% of its oil production out to 2016. This lets the company know how much money will come in the door and can plan its development appropriately.

Enerplus, on the other hand, has left much more of its production of oil and gas "open," meaning that it's not under a futures contract and will be sold on the spot market. 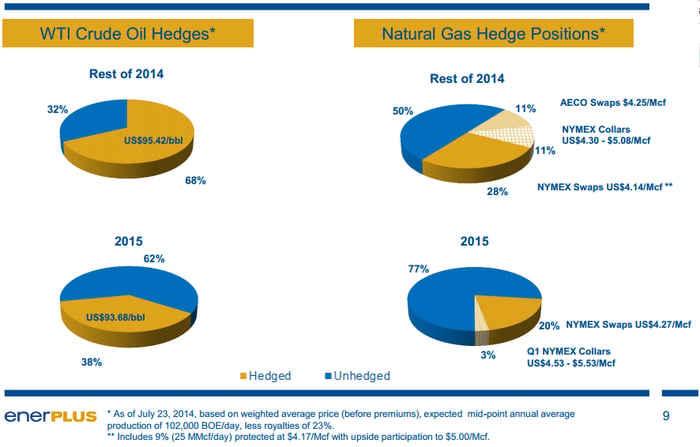 What this means is that the company is much more vulnerable to further declines in the price of oil and gas. If we were to see a further decline in energy prices throughout this year and potentially into next, then that highly coveted cash flow could dry up, and the company would need to revert to other methods for paying those dividend payments such as more debt issuances or possibly more asset sales.

Another aspect that puts Enerplus in a slightly riskier position than most of its distribution-paying peers is that it is putting a large focus into shale wells in the Marcellus formation in Pennsylvania and the Bakken/Three Forks formation in North Dakota. These types of wells are a little incongruent with Enerplus' business model. Just like MLP producers that love stability in prices, they love stability when it comes to production. This normally entails having long life assets that can produce for multiple years without needing lots of additional capital.

Today, Enerplus' company portfolio looks pretty good in this regard with a one-year decline rate of about 17%. However, its wells in these shale regions have much higher decline rates. In the case of the Bakken those wells can decline as much as 70% in the first year alone. 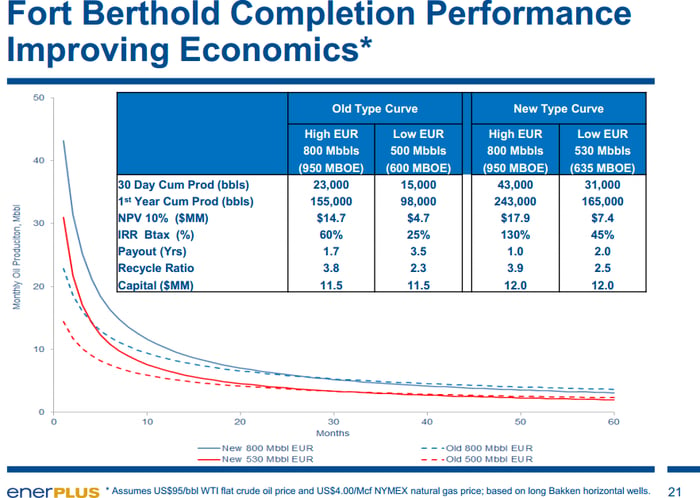 As these types of wells become a larger and larger portion of the company's production portfolio, decline rates will likely increase significantly and Enerplus will need to keep capital spending higher just to maintain current production levels. By contrast, LINN has a similar decline rate companywide (about 15%), but is dedicating larger and larger portions of capital to places like the Hugoton Basin that have decline rates in the single-digits.

The one thing that can justify this high-decline oil and gas production, though, is that the company is drilling some of the best wells in the entire Bakken/Three Forks Region. 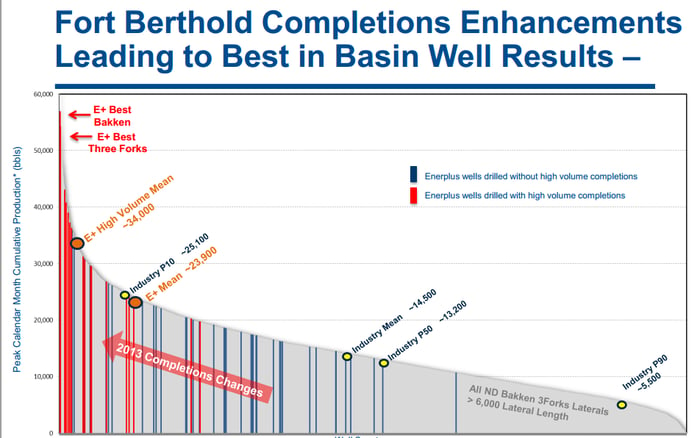 I can certainly see the appeal of owning a company like Enerplus. A company with a 5.1% distribution yield and strong operational results in one of America's top shale oil formations sounds like a slam dunk. However, the way that Enerplus is going about it is considerably riskier than other companies that have a similar business model. With so much more exposure to oil and gas price swings, it's much easier to understand why Enerplus' run was cut so short. However, if we were to see oil and gas prices spike, then shares of Enerplus might end up getting back to where they were just a few months ago.

Tyler Crowe owns shares of Linn Energy, LLC. You can follow him at Fool.com under the handle TMFDirtyBird, on Google+, or on Twitter @TylerCroweFool.