Please ensure Javascript is enabled for purposes of website accessibility
Log In Help Join The Motley Fool
Free Article Join Over 1 Million Premium Members And Get More In-Depth Stock Guidance and Research
By Isaac Pino, CPA - Oct 5, 2014 at 10:34AM

The wait is over. GE's bets in huge energy markets are paying off now.

If you pay a visit to General Electric's (GE 2.95%) website, you'll find that the driving force behind this massive and complex manufacturer is laid out in quite simple terms. As GE puts it, the company aims to provide products and services that "move, cure, build, and power the world."

What's excluded, interestingly, is the word "finance," despite the fact that banking still provides 43% of company earnings. But that segment is currently on a downward slide: Lending for the sake of lending is a thing of the past for GE.

On the other hand, the future can be found in GE's last objective: "power the world." Right now, the company is betting huge sums of money on long-term global energy growth. Here are three reasons why you need to pay attention to GE's work in this field:

A view of Shanghai at dusk. China's soaring population growth will bolster demand for power generation, an area GE has been heavily investing in. Source: Flickr/whiz-ka

While the ability to illuminate a room with the flick of a switch is something Americans probably take for granted, much of the developing world has yet to experience power-on-demand. But that dynamic is changing – rapidly – and with far-reaching implications for GE.

Looking decades into the future, human migration from rural areas to cities is set to accelerate around the world. As forecasted by the United Nations, there could be 668 cities of at least 1 million residents by 2030, an increase of 36% over today's total of 488. "Megacities," which are typically defined as metro areas with more than 10 million residents, will also become more prominent.

The rise of cities will, in turn, dictate new energy needs, as more households and businesses will require access to light and electricity. By 2035, the International Energy Agency estimates that more than 90% of net energy demand growth through 2035 will arise from up-and-coming economies.

This is where General Electric comes in. GE's experience in energy and infrastructure could prove immensely valuable, whether it's for a power plant in Ghana, an off-grid solution in sub-Saharan Africa, or solar-powered light bulbs in remote Asian villages. Yes, the light bulb still matters at GE.

GE's 9HA gas turbine, one of its most powerful. Source: General Electric

As GE sets out to power the world, it will benefit from not only selling products, but from providing lucrative follow-on services, too. At one point, as former CEO Jack Welch recalled, GE had no interest in being a mechanic for its equipment, but fortunately the company changed its tune.

Today, GE's services business is absolutely crushing it. GE's order backlog currently stands at an all-time high of $246 billion, and services represent $182 billion. In addition, this revenue stream provides some stability when GE's customers decide to reel in their spending. For example, while equipment orders in GE's oil and gas business dropped 9% in the latest quarter, services orders jumped by 23% year-over-year.

What's more, services are highly profitable for GE: Between 2011 and 2013, they accounted for 28% of revenue but a staggering 40% of earnings on average. Earlier this year, I predicted that services represent the key to GE's future profit growth. As energy demand accelerates, I think that will continue to hold true.

3. Because the industrial Internet might be energy's "next big thing"

Beyond services, GE's looking to add even more value for customers with what it calls the "industrial Internet." What's more commonly referred to as the "Internet of things" will enhance the productivity of machines around the world, and nowhere will that be more deeply felt than in energy.

In oil and gas, for example, GE just launched a product that will combine sensors with pipelines to collect information about maintenance, safety concerns, and usage optimization. Layer computer-driven analytics on top, and GE will be able to use data to save customers billions in foregone downtime.

Over the years, those savings add up. GE's CEO Jeff Immelt calls this the "power of 1%" compounded. In its latest annual report, GE estimated what the cost savings would be across industries over the next decade and a half. In the following graph of that data, notice that energy--including oil, gas, and power--towers above the rest: 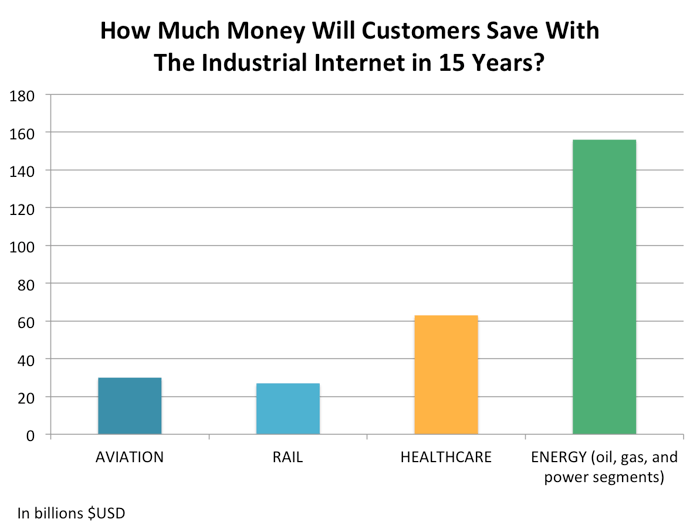 Twenty years ago, most industry on-lookers would have said GE had no business investing in the energy sector. It couldn't top "big oil" in terms of the scale needed to refine or distribute oil and gas, and equipment maintenance seemed like a low-margin dead end.

But GE, as usual, played the long game, and now its energy segments rake in $50 billion in revenue with 15% profit margins. Odds are, as GE connects growing global demand with high-tech equipment, services, and data, the future will burn brighter than the past for this business.

Isaac Pino, CPA owns shares of General Electric Company. The Motley Fool owns shares of General Electric Company. Try any of our Foolish newsletter services free for 30 days. We Fools may not all hold the same opinions, but we all believe that considering a diverse range of insights makes us better investors. The Motley Fool has a disclosure policy.