Which airline is generating the most revenue from non-ticket, or ancillary fees?

Did you ever wonder about how those non-ticket airline fees always seem to creep up year after year? Well if you did, then the following data will confirm your worst fears. Airlines are making more and more money from non-ticket,or ancillary fees, and it's now become an integral part of their business model—for budget airlines and traditional airlines alike. It's time to look more closely at which airline is making what from ancillary fees.

The first source listed contains some of the most controversial fees, and readers can get a flavor of how important each source is from a breakout of the ancillary revenue sources of budget operator, Spirit Airlines (SAVE -1.29%), the leading ancillary revenue generator by percentage of sales with 38.4%. 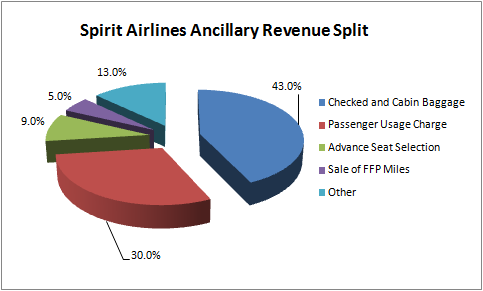 The top 10 ancillary revenue generators by revenue
In terms of revenue:

It's not surprising that discount airlines like Ryanair (RYAAY 1.65%) and easyJet generate a large part of their revenue from ancillary sources. However, in terms of revenue per passenger, airlines like Air France/KLM, American Arlines (AAL -3.12%), and Delta (DAL 0.03%) are generating almost the same as the budget airlines. However, the standout numbers come from United Airlines, because excluding for the frequent flier program miles sold, United is still generating around $20 from its ancillary revenue. In fact, it's total ancillary revenue has gone up 9.5 times since 2007.

The top ten airlines by share of total revenue
There will be no surprises here, as budget/discount airlines dominate the top 10.

While budget airlines dominate the top 10, it's notable that United Airlines comes in 12th with 14.9%. Moreover, the former kings of the budget airline industry (easyjet and Ryanair) actually generate far less per passenger than newer discount airlines like Spirit Airlines or Wizz Air.

While the figures seem startling, it's not necessarily a bad thing. On the contrary, customers who are willing to pay many of these fees are helping keep ticket prices down for passengers who are not so keen to pay for premium services. Moreover, for the airline industry, it's become a major source of revenue. Investing Fools already know why this year is shaping up to be a great year for North American airlines, and ancillary fees are helping to keep airline capacity utilization (the percentage of passengers on miles flown) high by being able to keep ticket prices low. A win-win for passengers and airlines.