Becton, Dickinson and Company has upped its dividend for 42 years, but questions suggest there may be better dividend stocks to buy.

These aristocrats post an enviable track record of increasing their annual dividend payout for at least 25 consecutive years. It's a select group, but that doesn't necessarily mean it's time to buy.

So let's look at Becton, Dickinson and Company (BDX 0.92%), a dividend aristocrat that's boosted its dividend for 42 consecutive years, and see whether now is a good time to add it to portfolios. 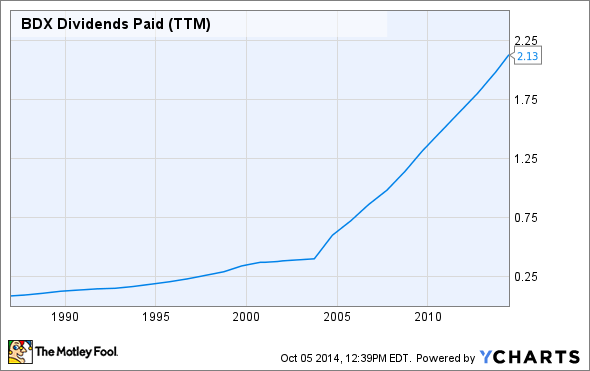 A stable and growing business
Becton, Dickinson and Company is far from a newcomer -- the company dates back to 1897 -- and it's far from a one-trick pony -- the company makes and sells medical devices, instruments, and reagents through three business segments: BD Medical, BD Diagnostics, and BD Biosciences.

The company's BD Medical unit sells needles, syringes, and other products used by healthcare providers and consumers to deliver medication, such as insulin for diabetics. BD Diagnostics sells products that help providers collect samples for testing, including blood testing for infectious disease. And BD Biosciences sells items that are used in drug development, such as cell analysis tools and diagnostic assays.

Global demand tied to aging populations and developing economies has helped sales climb steadily across those businesses, propelling Becton's revenue from $6.75 billion in 2009 to more than $8 billion last year.

Growth, at a price
But that sales growth hasn't come cheap. The company's debt-to-capitalization ratio has jumped from 26.8% to 43.1% (long-term debt has more than doubled in the past five years) and the company's gross margin has sagged, slipping from 52.7% to 51.8%.

Increased debt repayments (the company's interest payments have grown from $9 million to $98 million) and margin pressure have created headwinds for earnings that are partially being offset by stock repurchases. Over the past five years, the number of outstanding shares has fallen from 246.8 million to 199.2 million shares. But even with the help of a shrinking share count, Becton's EPS has grown only 2.8% since 2009, which is far slower than net income, which is up 4.9%, and sales, which have climbed 19.4%.

Fool-worthy thoughts
Becton is aware that it needs to do a better job of dropping sales growth to the bottom line. It's ReLoCo cost-cutting program saved the company $50 million in its medical surgical business, prompting Becton to roll out the program companywide. That could help kick-start bottom-line growth.

If so, dividend investors should benefit as demand rises for Becton's needles, syringes, and systems. Next-generation infusible drugs targeting diabetes, cancer, and autoimmune diseases are coming to market; industry watcher IMS Health projects that spending on specialty medicine will grow from $171 billion in 2012 to between $230 billion and $240 billion in 2017. If that projection proves true, then the rising use of these specialty medicines should give Becton plenty of firepower to keep increasing its dividend. Having said that, there's not a lot of incentive to jump into Becton, Dickinson and Company's shares instead of other high-paying aristocrats. Its 1.88% dividend yield handily trails other large-cap, dividend-paying companies, including Coca-Cola (KO 0.29%) and AT&T (T -1.14%), and that means I'm content to remain on the sidelines and wait for a better time to buy.

Todd Campbell has no position in any stocks mentioned. The Motley Fool recommends Becton Dickinson and Coca-Cola and has options on Coca-Cola. We Fools don't all hold the same opinions, but we all believe that considering a diverse range of insights makes us better investors. The Motley Fool has a disclosure policy.

Scared of a Bear Market? Buy This Rock-Solid Stock Now
413%