Is this solar leader stable enough to be considered a blue-chip stock?

Blue-chip stocks are some of the largest, most stable investments on the market and are designed to provide the stability investors desire. Stocks that are considered blue chips also change periodically, adapting to the industries that dominate our world at any given time. With that in mind, could First Solar (FSLR -0.94%) ever be considered a blue-chip energy stock now that solar energy is becoming accepted by the energy sector?

In energy, most blue chips are currently associated with oil & gas and electricity generation. But fossil fuels' dominance of energy is fading, and solar energy is now accounting for more than half of the new electricity capacity built in the U.S. and a growing portion around the world. With that backdrop, it may be time to consider a solar energy stock for blue-chip consideration.

Leadership position in an emerging energy market
Energy stocks have gone through a major transformation over the last five years, and solar energy is now the sector's hottest industry. The driver is the rapidly falling cost of building solar power plants, which are now even economical to build on residential rooftops.

First Solar is the leader in building large-scale solar power plants and has done so all around the world. It is also one of only a few solar companies that make a significant profit today. But these profits are far from consistent, as you can see below, and volatile profits aren't going to make First Solar a blue-chip stock. 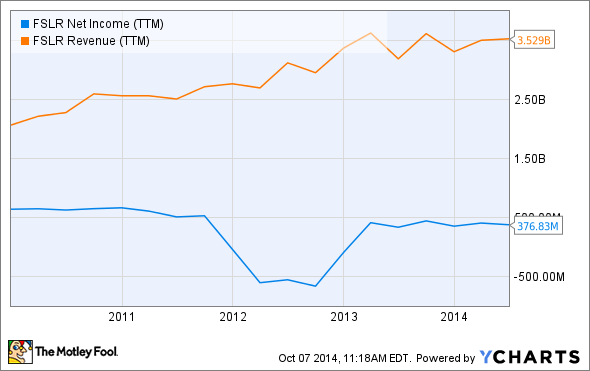 One of the reasons for this volatility and a challenge for First Solar is its technology. First Solar is a world class system installer, but its panels are less efficient than most of its competitors. But this is where First Solar has an opportunity to show great improvement and flex its research muscle, which could show its ability to adapt to the market long term -- which any blue chip would do.

Innovation driving future growth
For First Solar to be considered a blue-chip stock it has to use research to maintain a technology lead over competitors. It was research that drove the company's dominance during the 2000s, but recently it has fallen behind.

Right now, the company's panels are only 14% efficient at turning the sun's light into electricity compared to 21.5% for the industry's leader. But research advancements are anticipated to improve that efficiency to over 17% by 2017 with more improvements expected beyond that.

One of the qualities a blue-chip stock needs to have over the long term is the ability to adapt and evolve as the industry it serves changes. First Solar is attempting to do that, but it's a long process, and this is the first major technology evolution it's had to go through. Until it proves that research will continue to drive its competitiveness in the market this isn't a blue-chip stock.

Becoming a blue chip
First Solar is a long way from becoming a blue-chip stock but the foundation is beginning to form for blue-chip status. The company has a solid balance sheet with $1.3 billion in cash and just $223 million in debt and has also returned to profitability.

The solar market is also an emerging force in energy, and there's sure to be a blue-chip stock or two to emerge from the industry. But it's too early to say that First Solar is consistent enough to become that blue chip. It has to prove over the next five years that it can make technology improvements that will keep it ahead of others in the marketplace. If it can, this could be a stock that can make investors money for decades to come.