The USPS is moving to deliver your groceries

Grocery delivery isn't such a novel idea. Webvan is one of many poster children from the dot-com boom era that quickly flamed out, along with HomeGrocer.com, the larger grocery delivery service it eventually bought out -- both of which ended up in bankruptcy.

Those were the days of heady ideas and impossible valuations. Photo: Flickr user Mark Coggins.

Yet today there are lots of companies doing it, and doing it right, including Peapod, FreshDirect, and Instacart. Grocery stores like Wal-Mart (WMT -0.10%) and Safeway (NYSE: SWY) see the service as a potential driver of growth and offer delivery themselves, while Amazon.com (AMZN -1.44%) will deliver groceries (and just about anything else it sells) via its AmazonFresh service.

More surprising is who wants to get in on this newly burgeoning industry: your local mail carrier.

First-class groceries
According to a proposal submitted to the Postal Regulatory Commission two weeks ago, beginning on Oct. 24 the USPS wants to begin a two-year test of a "groceries and other prepackaged goods" delivery service it calls "Customized Delivery." 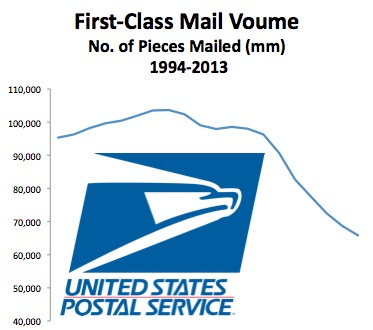 The rise of electronic and mobile communications heralds the death of the first-class letter. Data: United States Postal Service.

Since people don't write letters as much as they used to -- first-class mail volume has tumbled to levels not seen since the 1980's -- the agency is looking for other growth opportunities.

The USPS points out the grocery delivery business is booming. In its proposal, it says "grocery delivery services are expanding across the nation, with businesses ranging from the nation's largest retailers, to niche operators, to the popular car service Uber entering the marketplace." That has them salivating over new revenue-generating plans.

Small pond, big fish
While the USPS is correct about the fast-growing nature of the industry, that doesn't mean it should be allowed to use its position for delivering first-class mail to possibly displace private enterprise.

It's already capitalizing on its position to undercut the prices of package delivery services FedEx (FDX 0.53%) and UPS (UPS -0.42%). The post office, just weeks after its rivals announced their rate hikes, applied for and was granted the ability to cut rates between 30%-50% in weight categories that are used frequently by e-commerce sites.

FedEx charged it was a blatant attempt to steal e-commerce customers while UPS said it was subsidizing package delivery with its first-class mail monopoly. Where the USPS was raising rates on mailing out a letter it was cutting them where the competition was thickest.

Hungry for more
And now the USPS has its eyes set on the grocery delivery service.

Amazon is assisting the USPS in its efforts. They've already tested the program together in the San Francisco area where it recorded 160 deliveries per day for 38 ZIP codes.

From the supermarket to your doorstep. Photo: Flickr user Dan4th Nicholas.

It builds on the partnership Amazon launched with the post office last November to begin package delivery service on Sundays. In essence, the e-commerce leader -- even though it was also forced to raise the rates of its premium Prime delivery service -- is running around FedEx and UPS, saving itself money by using the government's resources.

Down the rabbit hole
The post office has been a money-losing operation for years. Its default argument has been the losses are caused by a congressional requirement that it prefund 75 years worth of retirement benefits for its workers over a 10-year period, something it says no other agency is required to follow. The Government Accountability Office has basically debunked that notion the USPS had such an onerous burden imposed on it, and says it's more a case of semantics.

The fact is, despite a few spectacular wipeouts at the dawn of the Internet age, the private sector is meeting the needs of the grocery delivery marketplace quite well. Entrance by the government now using the power of its mandate to deliver mail could end up crowding out other businesses.

In the end, government perhaps does best when meeting needs unmet by private enterprise. As even the U.S. Postal Service admits, grocery delivery is a burgeoning industry teaming with competition.

Rich Duprey has no position in any stocks mentioned. The Motley Fool recommends Amazon.com, FedEx, and United Parcel Service. The Motley Fool owns shares of Amazon.com. We Fools may not all hold the same opinions, but we all believe that considering a diverse range of insights makes us better investors. The Motley Fool has a disclosure policy.