It was all a bit of miscommunication. Or at least that's the spin Arrowhead Research's (NASDAQ:ARWR) C-suite is putting on the 50% drubbing its shares suffered last week following the release of data on its ARC-520, a promising therapy for hepatitis B.

Shares endured a flurry of selling as analysts digested ARC-520's midstage dosing trial results, deciding in a hurry that failure to achieve a 90% reduction in HBsAg [the hepatitis B virus's surface antigen] spells doom for the drug. But knee-jerk reactions don't always tell the whole story, so let's take a closer look to see if Arrowhead can recover from its black eye. 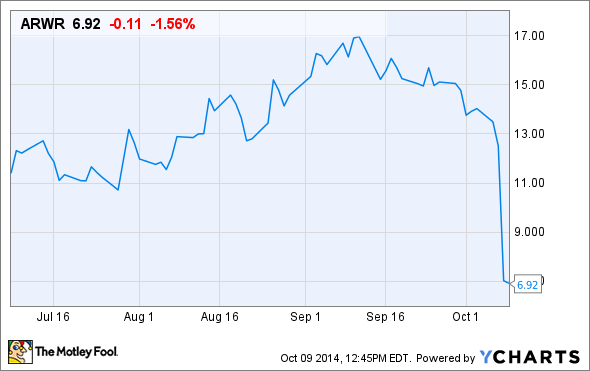 First, a bit of background
Despite existence of a vaccine that prevents 95% of new cases, the World Health Organization estimates that more than 780,000 people die every year from hepatitis B-related causes.

More than 240 million people globally have chronic liver infections, and HBV infection can lead to liver failure and liver cancer. The disease is most common in sub-Saharan Africa, where 900 million people live, and East Asia. In those regions, people usually contract the disease during childhood. As a result, roughly 5% to 10% of the adult population in those markets is infected with chronic HBV, and between 15% and 25% of adults who become chronically infected during childhood die from hepatitis B-related disease.

Current treatment is more palliative and includes antiviral drugs including Gilead Sciences' (NASDAQ:GILD) tenofovir (sold as Viread), Bristol-Myers Squibb's (NYSE:BMY) entecavir (sold as Baraclude), and interferon. While a cure for hepatitis B doesn't exist, recent innovation in treating hepatitis C, another common cause of liver disease, has sparked considerable hope that a similar functional cure can be developed to treat hepatitis B. Those hopes haven't yet materialized, but a number of drugmakers have promising therapies in clinical trials, including Arrowhead's ARC-520 and Gilead's Tenofovir Alafenamide, GS-4774, and GS-9620. Setting the bar too high
Arrowhead is conducting midstage clinical trials in humans to determine the dose of ARC-520 necessary for larger, late-stage efficacy trials.

The company presented the results from that dosing study at an industry conference this week, and while that data doesn't appear to be that bad, it fell short of analysts' expectations for better response rates at lower doses.

Arrowhead reported in August that low doses of 1 to 2 mg/kg wouldn't achieve the 90% knockdown level the company believes might lead to an eventual cure (and the level upon which analysts were so bullish). So the company has shifted its focus to the 3 to 4 mg/kg dose range.

Regardless, it appears investors were still hoping to see greater knockdown levels for the 1 to 2 mg/kg doses when Arrowhead reported the actual data this past week. That data revealed that a 1 mg/kg dose delivered a knockdown of 39% and a 2 mg/kg dose showed a knockdown of 51%. Since the 51% knockdown rate is a far cry from the company's stated 90% target, investors appear to be extrapolating that data to mean ARC-520 is a failure. However, that simply isn't the case (yet).

In picking its 90% knockdown goal, Arrowhead relied on data from the few patients who achieve a functional cure when treated with interferon. In those interferon patients, the knockdown rate after 12 weeks is 70% and after 24 weeks is 90%.

ARC-520's 51% knockdown rate still falls shy of the 70% rate for those interferon patients, but preclinical evidence suggests a higher dose could deliver a better knockdown number.

In preclinical primate studies, a 2 mg/kg dose in chimpanzees on day one resulted in 50% knockdown on day 15. At that point, the chimpanzees were given a 3 mg/kg dose, which then led to an 80% to 85% knockdown.

Whether humans receiving 3 mg/kg dose will see as big a jump in the knockdown rate as chimpanzees isn't yet known, but that's the question Arrowhead is looking to answer. If it does lead to a similar knockdown level, then it's far from game over for ARC-520.

What does this mean?
If ARC-520 had shown it could knock down hepatitis B at the lower doses, investors would have cheered. Instead, they jumped ship rather than wait to see how the 3 mg/kg dose plays out. That might not be the best choice, but uncertainty is often sufficient reason for many investors to head for the exit; particularly in biotechnology stocks.

Since Arrowhead will need to know what dose of ARC-520 it wants to use in its upcoming phase 2b trial, and the company maintains that trial remains on schedule for next year, management should have insight into the knockdown rate for the 3 mg/kg dose soon. Since phase 1 safety studies show that ARC-520 is well tolerated up to 4 mg/kg, there seems to be plenty of room to increase the dose without boosting the risk of toxicity. Regardless, the disappointing results for the low doses are likely to remain a weight on Arrowhead's share price until we get data from the higher doses that prove that ARC-520 can deliver the knockdown levels needed to suggest a functional cure could be on the horizon. That indicates it will be some time before investors have any clarity.