Please ensure Javascript is enabled for purposes of website accessibility
Free Article Join Over 1 Million Premium Members And Get More In-Depth Stock Guidance and Research
By Tim Beyers - Oct 10, 2014 at 11:30AM

Both chains have their fans, but which would you want to invest in? Credits: Five Guys Burgers and Fries, In-N-Out Burger.

Anyone who's ever lived in Southern California can tell you that the world's best burger is made by In-N-Out Burger, a family owned quick serve restaurant that started in 1948 as the region's first drive-thru burger stand.

I've been away from SoCal for going on 17 years now. Only during occasional trips back do I get a chance to enjoy In-N-Out's signature creation, the Double-Double: a two-patty cheeseburger decorated with lettuce, tomatoes, grilled onions, and a mouth-watering special sauce.

Local Colorado friends -- and more than a few at Fool HQ in suburban Washington, D.C., where the chain started -- say I'll be just as happy with Five Guys Burgers and Fries, which, unlike In-N-Out, now has several locations near me. I've yet to accept their invitation. Looking at the numbers, I wonder if they have a point.

Give this list a close look and you'll notice three things:

In-N-Out doesn't franchise. As a result, its $558.2 million in gross sales ranked 13th among burger joints last year and 44th on QSR's annual top 50 list. Contest over, right? Five Guys is not only bigger but it's also growing faster thanks to franchise leverage.

If only it were that simple. The size of Five Guys' empire isn't so important as the cost of expansion, and what each store is capable of earning. 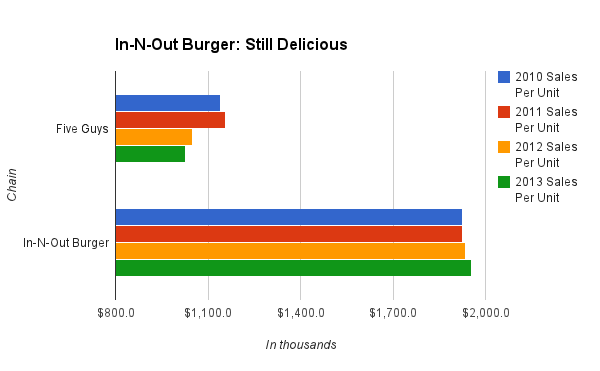 See the difference? While Five Guys has enjoyed bursts of growth, In-N-Out is expanding more predictably as the chain proves itself in new territories. In 2011, the company opened its first stand in Texas. There are now 25 locations either doing business or in development across the state as locals prove insatiable. Further expansion into surrounding states seems likely.

Knowing what we do about In-N-Out's history and strategy, chances are it will all be funded through excess cash generated by existing stores. That's a mark of a truly great business, and why I think In-N-Out should get the nod over Five Guys.