Please ensure Javascript is enabled for purposes of website accessibility
Log In Help Join The Motley Fool
Free Article Join Over 1 Million Premium Members And Get More In-Depth Stock Guidance and Research
By Jamal Carnette, CFA - Oct 11, 2014 at 9:00AM

McDonald's (MCD -1.70%) has seen better days, no doubt about it. Between poorly perceived food quality, longer wait times for food preparation, nutritional concerns, and product flops like Mighty Wings, the company has made many missteps. However, despite all of these issues, the argument could be made that selling its controlling ownership in Chipotle (CMG -3.22%) is the worst mistake in McDonald's history.

In a deal that neither company cares to emphasize -- after all, it goes against Chipotle's "outsider" status as a nutritionally focused restaurant and makes McDonald's appear utterly lacking of vision -- McDonald's used to have substantive interest in the burrito maker. In addition to much needed capital, McDonald's helped with operations and distribution concerns. By the time Chipotle went public in 2006, McDonald's owned a massive 90% of Chipotle's equity.

McDonald's turned a subsidiary into perhaps its biggest competitor
During the time in which McDonald's was an investor, Chipotle thrived. McDonald's helped the company become a mom-and-pop type Colorado-based chain with fewer than 20 locations, to a multi-state operation with more than 500 locations. Afterward, McDonald's exited its 90% ownership stake for $1.5 billion. For perspective, that investment would be $18.5 billion today making McDonald's a 20% larger company by market capitalization.

It's apparent McDonald's didn't see the value statement Chipotle presented. In many ways, Chipotle is the antithesis of the fast food world that has been led by McDonald's. Seemingly unaware of the demographic and societal trends toward healthy food (as exhibited by the rise of grocer Whole Foods and the extreme growth in organics), McDonald's exited one of the best and cheapest ways to take advantage of the trend.

In turn, Chipotle has provided more than just mere competition, but rather a blueprint to compete against fast food giants. By focusing on high-quality ingredients, the company has really hurt McDonald's where it hurts -- Millennials.

A recent Wall Street Journal/ Technomic survey reports U.S. consumers in their 20s and 30s are defecting to Chipotle and Five Guys because of perceived food quality. For U.S. adults age 19-21, the defection is particularly pronounced with a 12.9 percentage point drop since the start of 2011.

A tale of two companies
What you've seen since the start of 2011 is two truly divergent organizations. Chipotle -- although growing from a lower base -- has seen their sales jump from $2.3 billion that year to $3.2 billion in the last fiscal year, for annualized growth of 19%. McDonald's annualized growth during that same period is 2% -- growing from $27 billion in sales to 28.1 billion.

And investors have rewarded Chipotle during that period as well, the chart below gives you content: 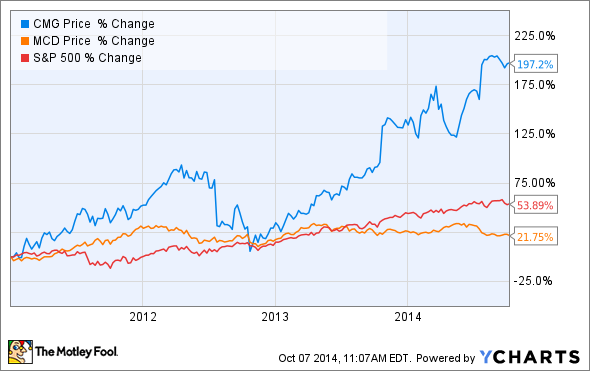 Since 2011, Chipotle has provided investors a nearly 200% return -- or nearly 10 times the gain McDonald's has provided. As you can see, McDonald's hasn't even kept up with the broader market. During that period, McDonald's has seen its executive ranks in flux by seeing its Chief Creative Officer leave the company after 14 years and its U.S. division replace its president twice.

The predominant goal [for traditional fast food chains] is the cheapening of the raw ingredients, the automation of the work such that anyone could do it ... so that they turn over their employees without any care for them, where it's a game of value meals and cheapening the food experience... That is traditional fast food, and we think that's going away. We, and others like us, will replace that.

And the company is branching out to become more than a mere burrito company by introducing its ShopHouse Asian concept restaurant and has recently opened a second pizzeria from its Pizzeria Locale brand.

Final thoughts
McDonald's sale of Chipotle was its biggest mistake. In addition to the low price it received when selling Chipotle, McDonald's provided much needed capital and distribution assistance to the fledgling company. So it's safe to say McDonald's is partly responsible for Chipotle's success ... and Chipotle defines success as destroying traditional fast food stalwarts like McDonald's in the process.