More than a third of Americans have four or more credit cards, so there's a chance that somewhere along the line a payment or two will get missed.

But before beating yourself up too much, it may help to learn that missing a payment is a pretty common blunder. According to Pew Research, 28% of folks with a middle class income or less paid a late payment in 2012.

Nevertheless, late payments are still likely to send your heart rate racing because they may cause your interest rate and all-important credit score to spike. However, that may not be the case if you follow this simple advice.

Easy as 1-2-3
Realizing that you've missed your payment may have you scurrying for your pen, but perhaps you should be picking up your phone instead.

A recent survey conducted by Creditcards.com discovered that 90% of people who called their credit card issuer and asked for their late payment fee to be waived were granted their request. That's impressive and it should capture your attention, particularly given that just 28% of those who were assessed a late fee actually called to request a waiver. 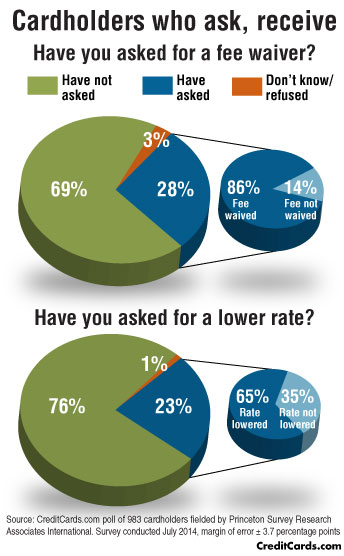 But that wasn't the only interesting finding to come out of the survey: 60% of people who called and asked for a lower interest rate were approved, too.

That may not be as impressive a win rate as asking for a late payment, but if you fall into a couple key demographics your chances for a lower rate may be even better.

If your household income is more than $75,000, then the approval percentage climbs to 72%. If you earn even more, the win-rate climbs as high as 93%. Seniors have more success, too. Among those 50-64 years of age, 79% got the green light for a lower rate.

The effect of asking
You may be wondering whether or not saving a $25 late fee, or spending an hour on the phone with a bank customer service representative asking for a lower rate, is worth your time.

That's because a quick phone call can relieve a lot of future headaches. Getting a waiver of your late fee will not only help reduce your payment next month, but it may help keep your bank from filing a late payment report to your credit bureau.

That late payment report could have a big impact. Your payment history makes up about a third of your credit score and if your credit score heads higher, the late payment will be the least of your worries. A higher credit score may mean that you pay far higher percentage loan rates for future purchases, like a car or home and even a 2% higher rate on a car loan can mean paying hundreds of dollars more in interest over the term of the loan. And another thing
Asking may save you money on credit cards, but it may also save you money on other things, too. Asking may get you a better price on your car insurance, life insurance, and property and casualty insurance; and cable companies often negotiate, too -- especially, if you can quote a competing price from a another provider. So, even if you're payments are on time, you still might want to pick up that phone and see what other deals you can get. If you do, I'd love to hear about it.