Chimera may be a cheap stock, but it's among Wall Street's most hated companies. Find out why Wall Street would just as soon give Chimera the boot and whether or not the stock can buck Wall Street's pessimism and head higher.

If timing really was everything, then Chimera Investment (CIM -1.68%) would be graded an "F" for going public in Nov. 2007, right as the stock market was having the rug pulled out right from underneath it. Although Chimera investors have been in for a relatively uneventful move year-to-date (down slightly on a nominal basis, but higher including dividends), Chimera's share price has been decimated over the past six years. 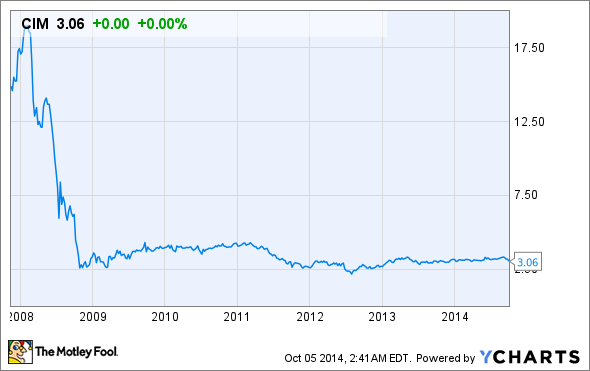 Yet on a statistical basis -- more specifically Wall Street's most-followed valuation metric -- Chimera is actually quite cheap. Though that doesn't seem to matter to analysts on Wall Street who would rather have absolutely nothing to do with the stock.

Today, we'll take a closer look at exactly how Chimera is considered to be "cheap" by Wall Street's standards, why it is that analysts hate the company, and whether or not optimists or pessimists are likely to win the battle anytime soon.

Why Chimera is considered to be a cheap stock
While it might at first appear that price-to-earnings ratios are among Wall Street's favorite valuation metrics, the tried-and-true valuation tool that most firms prefer is the price/earnings-to-growth ratio, or PEG ratio. A PEG ratio uses a company's price-to-earnings ratio, which is a measure of its profitability over the trailing four quarters, and divides it into the company's projected growth rate over a specified period of time (most often five years). This way analysts can get some idea of how expensive or cheap a company looks now compared to its future growth expectations, and it doesn't leave Wall Street always chasing returns in the rear-view mirror.

As an example, imagine that a stock you own had a P/E ratio of 20 and an estimated growth rate over the next five years of 15%. In this instance your stock would have a PEG ratio of 1.33, or 20 divided by 15. In general, a stock with a PEG ratio of one or lower is considered a cheap stock by Wall Street's standards. Based on data from Capital IQ, Chimera just nudges under the PEG ratio of one mark, placing it among an elite category of so-called "cheap stocks."

Why Wall Street hates Chimera
But, just because a stock is cheap doesn't mean Wall Street analysts like it. Currently, of the seven analysts who have a rating on Chimera, six of them rate it as a hold with the final analyst rating it as an underperform. Additionally, the mean price target on Chimera is just $3.04, or $0.02 lower than where the stock closed this past Friday.

Why does Wall Street hate Chimera so much? I suspect it boils down to two very specific issues.

First, Chimera announced a broad-reaching earnings restatement in August 2012 following a period where it went longer than a year without reporting financial results to investors or the Securities and Exchange Commission. Chimera's findings indicated that it incorrectly accounted for certain types of interest income in the non-agency category (the type of loan which isn't secured by the U.S. government). The result is Chimera was forced to restate its earnings between 2008 and 2011, decreasing its interest income during this period by $411 million to $1.46 billion, and chopping its net income by $695 million to just $367 million.

What does this all mean? Simply put, it means Wall Street has lost its faith in Chimera's management team and its ability to accurately account for its investments. I'd personally like to think that under increased scrutiny Chimera is doing a great job of dotting it's "i's" and crossing its "t's" now, but Wall Street clearly has an aversion to the stock following that huge restatement and the company scrambling to get the remainder of its quarterly results thereafter in line.

Secondly, I suspect Wall Street is a bit nervous about what will happen to long-term interest rates with QE3 set to end this month and the Federal Reserve tempted to begin raising the federal funds rate in 2015. Chimera invests in both agency (e.g., government backed) mortgage-backed securities and non-agency securities, and the important figure that investors watch in mortgage real estate investment trusts, or mREITs, like Chimera, is the company's net interest margin. Generally speaking, the lower the federal funds rate the higher the net interest spread for the mREIT sector. Furthermore, better long-term visibility can mean the use of more leverage for these mREITs, which is where the bulk of their profits come from.

However, with lending rates expected to tick higher sooner rather than later, but no specific date set as to when that might occur, mREITs' long-term visibility is suddenly clouded, thus hurting their chance to fall back on heavy leveraging. Similarly, higher interest rates could cause mREITs' net interest margins to shrink. Because nearly one-quarter of Chimera's asset portfolio is comprised of non-agency securities (non-agency securities have higher yields, but greater risks) it could be punished more severely than its peers when rates do begin to rise, especially if net interest margin rates tighten as expected.

Chimera may be cheap, but can it head higher?
The big question that needs to be asked is whether or not Chimera has the ability to head higher from here. The stock is certainly cheap, but Wall Street clearly doesn't like it; so, who's right?

I would suggest that both the optimists and pessimists are right in this case. Skeptics have every reason to be wary of Chimera following its earnings restatement and the expectation that its net interest margin is set to shrink in the coming years. In just the past quarter we witnessed Chimera's net interest margin fall to 5.93% from 6.59% in the year-ago period, perhaps signaling that a long-term tightening is already afoot.

However, on the plus side Chimera has loaded its portfolio with agency-backed securities since the end of 2013. These securities are backed by the U.S. government, thus allowing Chimera to boost its leverage without taking on a substantial amount of risk. In theory, with the federal funds rate not expected to be targeted at a level of higher than 2% before the end of 2017, Chimera could utilize leverage to grow by roughly 10% per year, in my opinion.

Ultimately I'm torn about Chimera. From an investment perspective, I have a hard time justifying a significantly higher share price considering its past problems and given that QE3 is about to come to a close. Yet, I also have confidence that its dividend is safe for the time being, which means investors will be collecting a juicy 11.8% dividend yield. I suspect investors who have an intermediate term horizon on Chimera (one-to-three years) should do just fine with its dividend payback alone, but I'd suggest reevaluating Chimera on a regular basis as the industry is subject to wild swings based on the Fed's monetary policy actions.

The Motley Fool owns shares of, and recommends Bank of America and Apple. We Fools don't all hold the same opinions, but we all believe that considering a diverse range of insights makes us better investors. The Motley Fool has a disclosure policy.

Why Is Chimera's Dividend So High?

Here's Why Dividend Cuts Are a Risk for Mortgage REITs