There isn't a better example of a blue chip stock than Big Oil companies such as ExxonMobil and Chevron. They have size and economics of scale in a high-demand market, along with integrated operations spanning from the production of oil and gas all the way to retail sales of oil-based products.

Surely, if ExxonMobil and Chevron are considered blue chips, then another massive integrated oil and gas company, Petrobras (PBR -3.17%), can be considered a blue chip stock as well, right? Probably not. Let's look at why Petrobras might have the facade of a blue chip company, but actually isn't. 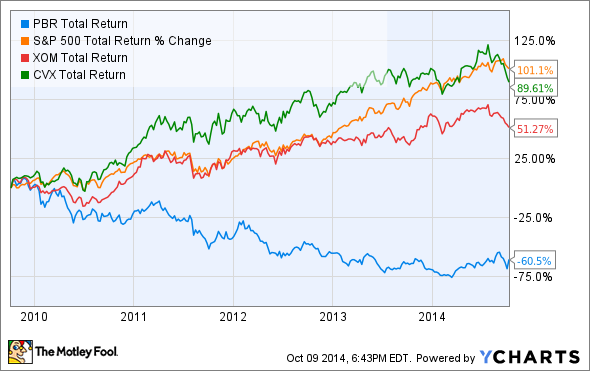 What makes a stock a blue chip?
The term "blue chip stock" is normally used to mean "a company we all know," but the actual definition is a little bit more detailed. For a company to be considered a blue chip stock, it needs to have a long history of generating profits and paying an ever-increasing dividend to shareholders. Other traits most blue-chip stocks share are large market capitalizations and sparkling clean balance sheets.

Why Petrobras fails the blue chip test
If we're being sticklers for definitions, we could probably disqualify Petrobras for the simple fact that very few people have ever heard of the company outside of Brazil. It is, after all, the country's national oil company. But there are several other reasons the company doesn't make for a blue chip stock.

Let's start with ownership structure. Petrobras is a bit of a hybrid, half owned by the state, half owned publicly. This means it is beholden to two masters that have very different priorities. While investors are looking for the company to turn a profit and appreciate in value, a major objective of the state is for the company to supply the country with cheap gasoline and diesel, as well as be a major employment opportunity. Labor laws in Brazil require that all of Petrobras' operations have a certain percentage of local workers and locally sourced equipment. Also, the price of gasoline is set by the state and not supply and demand economics, so Petrobras perpetually takes losses on the sale of gasoline as it needs to import large quantities to fulfill domestic demand.

Petrobras' debt profile might also leave investors wary of the stock. Today, it is the the most indebted publicly traded oil company on the market, with over $284 billion in long-term debt and a debt-to-capital ratio of 44%. That might not sound like much for a smaller, high-growth company, but Petrobras shells out close to $5 billion a year in just interest expenses. Petrobras is taking on so much debt in an effort to develop one of the largest oil discoveries in the world, the pre-salt formation off the Brazilian coast. Spending on this extremely ambitious program has far outstripped Petrobras' operational cash flow for close to a decade.

Finally, if all of those things weren't enough to convince you that Petrobras might not be blue chip-worthy, there is also the issue with the company's dividend. Unlike most dividend-paying companies that deliver a constant payout that management sets and increases over time, Petrobras' dividend is based on certain covenants related to net income and share value, so the payout can fluctuate. For someone looking for a constant, reliable income source from his or her investments, this isn't the place to look.

What a Fool believes
If Petrobras can execute on its development program, increase production and refining capacity, and start trimming down its debt profile, then perhaps it will be worth revisiting as a potential investment. Based on where it is today, though, several hurdles make Petrobras' future uncertain, and uncertainty is a characteristic you don't want in a blue chip stock.

The Motley Fool recommends Chevron. We Fools may not all hold the same opinions, but we all believe that considering a diverse range of insights makes us better investors. The Motley Fool has a disclosure policy.