Tucked away inside an American Capital Agency Corp. (AGNC 0.80%) presentation may be the single best reason to own it -- its managers are aligned with shareholders.

What really matters in "jockey play" stocks
American Capital Agency is a "jockey play." Its performance will only be as good as its management's decision-making skills.

But I think there is more to the story with American Capital Agency than with most mortgage REITs. The company has another lever to pull that most of its peers wouldn't pull: making shareholder-friendly share repurchases. 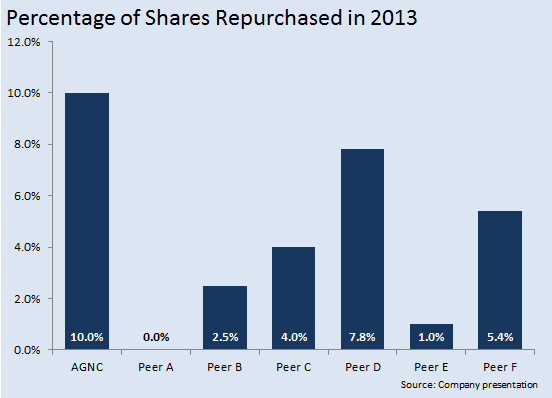 Most mREITs are externally managed. The external managers are compensated based on a percentage of assets under management. For American Capital Agency that figure is 1.25% of adjusted shareholders equity per year, paid monthly.

Thus, the management team makes more money when it grows the mREIT's balance sheet. We're not talking performance here -- mREIT managers can grow their pay just by issuing new shares of stock in the mREIT.

And they can cut their pay by buying back shares of stock. Over the last year, that's exactly what American Capital Agency did. It repurchased its own shares opportunistically, in quantities well above its peers' own repurchases. And it did so at valuations that made its shareholders, not its managers, wealthier in the process.

Why it matters
All too often, externally managed companies will use trivial repurchases to show their allegiance to shareholders. Many approve massive buybacks then buy back only a few thousand shares. Some won't use their authorizations at all.

When any mortgage REIT trades under net asset value, the easiest way for it to enrich shareholders is to repurchase shares. A price under net asset value literally means that an mREIT is cheaper than the mortgage-backed securities the company owns. Thus, buying back shares is the most economical way to reinvest cash into its portfolio.

American Capital Agency's history of above-average buybacks makes it, in my opinion, an above-average mREIT (and the 11.6% dividend yield it sports, per S&P Capital IQ, isn't too shabby either). Its managers seem to understand that over time, they will attract assets by delivering the best returns in the long run, even if it means hurting themselves in the short run. If only every externally managed company shared in that view.

AGNC Reports Earnings and Comforts Investors About the Dividend