3D printer manufacturers 3D Systems, Stratasys, and others have see their stocks pummeled this year. The funny thing is, the industry has never been stronger.

If you invested in 3D printer companies Stratasys (SSYS -5.17%) or 3D Systems (DDD -3.29%) a few years ago, you're probably pretty happy with your decision: 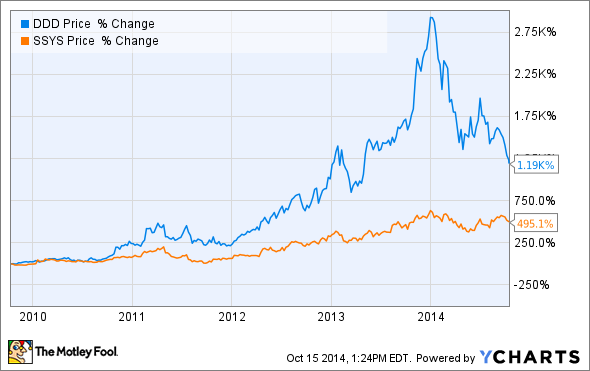 But if you've invested in these companies in 2014, or in competitors such as Arcam AB (NASDAQOTH: AMAVF) or The ExOne Company (XONE), or 3D printing and short-to-medium-run manufacturing service provider Proto Labs, Inc. (PRLB -1.33%), then you're probably not very happy: 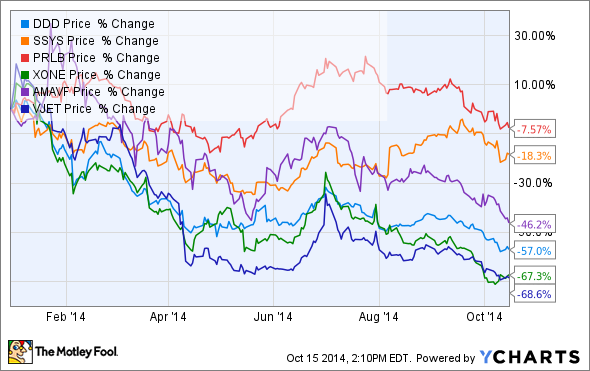 The question's on many a mind right now: Has all the best money been made? Are 3D printing companies a bad investment, or is there still big potential?

Let's look at what's happened with these companies over the past year and see what we learn.

Momentum and the price of growth
As much as anything, this is largely the story for 3D printing companies this year. Last year was full of hype for this burgeoning industry, with three companies -- ExOne, Arcam, and voxeljet AG (VJET -5.62%) -- all going public. Investors were fed a world of endless possibilities that included a 3D printer in every home, doctor's office, and manufacturing plant on the planet. Heck, it didn't even stop there, with 3D printers being designed for operation in space.

However, all of this growth hasn't come exactly as the investor community expected. With the exception of Stratasys, most of the industry has missed earnings estimates in recent quarters. 3D Systems saw its revenue increase 25%, but earnings declined last quarter. ExOne missed both earnings and revenue estimates, reporting a loss that was more than double what was expected, though it did reaffirm its revenue projection for the full year. voxeljet also fell short on revenue and earnings, though it did, like ExOne, reaffirm its sales forecast for the year. Of the major players in the 3D printing space, only Stratasys beat both earnings and revenue projections this past quarter.

What's up with this trend? In short, it's the price of growth, and the result of very large numbers affecting very small companies.

3D Systems says it can't keep up with demand for its metal printers. Source: 3D Systems.

Removing Proto Labs, which generates the majority of its sales from more traditional manufacturing methods, such as CNC and injection molding, the other five companies have generated $1.29 billion in combined sales over the most recent 12 months reported. For the 12 months before that, it was $821 million -- so sales grew a whopping 57%. However, much of the growth was a product of mergers and acquisitions, and not just organic sales, especially for 3D Systems, which has made dozens of acquisitions over the past year, and Stratasys, which merged with Objet in December 2012 and bought MakerBot in June 2013.

While Objet and Stratasys' merger was completed some time ago, and much of the costs have been rationalized, 3D Systems is regularly looking for smaller competitors to fold into the mix. This process costs money, and it takes time for acquisitions to be integrated fully. In the interim, it affects the bottom line.

For smaller companies such as ExOne, which also happens to sell some of the most expensive machines designed for industrial applications and advanced materials such as aluminum, brass, titanium, and matrices of multiple metals, all it takes is for one machine sale to be delayed, and the company can miss analyst estimates. This is largely why the company provides only a yearly outlook -- hence the bumpy ride we've all seen, as ExOne has missed analyst estimates almost every quarter since going public last year.

Long-term potential largely unchanged
Over the past 18 months or so, there has been a lot of consolidation in the industry, as reflected in the acquisitions and mergers that Stratasys and 3D Systems have been involved in, while on the other end of the spectrum, the smaller and more specialized companies such as ExOne and voxeljet have simply reported lumpy results as they spend to grow. Going forward, investors need to expect that both further consolidation by the largest players and inconsistent results by the specialists is likely to continue.

However, projecting out five years or more, the industry is growing like crazy. Total industry sales this year are expected to be $3.8 billion, up 52% from 2013. By 2018, total sales are expected to grow a whopping fourfold from this year, to more than $16 billion. Of this amount, nearly $11 billion will be services and materials.

Expertise and specialists could be differentiators
As the industry has expanded, it has become apparent that 3D printing isn't something many companies are capable of jumping into. There are a limited number of people who are trained and skilled at utilizing the benefits of 3D printing, and this is a stumbling block for wider-scale adoption. With this in mind, the manufacturers are stepping up their abilities to act as service providers for their customers, providing both production services and design help.

3D printing parts like this compressor manifold can save time and money. Source: ExOne.

ExOne is a great example. The company operates eight production service centers, and through its ExCast strategy it's moving from just being a fulfillment partner to being involved in the entire product process, from design to testing and manufacture. This approach is being driven by its customers that don't have the in-house resources to fully implement 3D printing, as well as many that could benefit but maybe don't have enough need to invest in bringing it in-house yet.

Many of those customers will grow into bringing production in-house, if their production volumes (read: costs) are high enough. But for customers who may not have the demand, being an expert will allow ExOne to leverage them too.

Stratasys' recent acquisition of GrabCAD is another example of consolidation of resources. GrabCAD is best described as an open forum for engineering and design collaboration. The power of collaboration for a technology like 3D printing, which by its very nature removes conventional restraints for product design, works incredibly well for a platform like GrabCAD. While GrabCAD isn't just a 3D printing design forum, you can bet that Stratasys is looking to leverage the association between itself and GrabCAD in the design community.

Still the first act
Sports analogies and investing get thrown together a lot, so let's go theatrical instead. The first act is all about setting up the story and introducing the characters. Frankly, we are still in that early phase, with these companies doing less annual revenue, combined, than General Electric does in a month.

Of the group, I think the market may have been overly hard on ExOne and 3D Systems this year, though they have had notable stumbles. If 3D Systems' growth strategy pays off -- and I think it will -- and ExOne's advanced metals technology and ExCast strategy pay off like they could, these two could be huge winners. Stratasys has also performed well, and its management seems to be most focused on balancing profits and growth at the same time, while the others are investing more today -- at the short-term cost of profits -- hoping to be positioned better for tomorrow.

Looking for a more diversified investment? Proto Labs is involved in all kinds of manufacturing, not just 3D printing. It might be exactly what you're looking for.