The price of oil is heading lower, making it harder for drillers to turn a profit; is the U.S. energy renaissance about to stall?

The United States energy industry has experienced a huge burst of growth over the last decade or so as once unprofitable to drill oil and gas regions have been opened up by technology and elevated prices. That's been most prominent of late on the shale oil front, where energy prices have remained relatively high—a fact that's recently started to change. It might be time to examine the domestic natural gas market for some clues as to what could happen next.

The rapid increase in supply led to some odd pricing. For example, the price relationship between Brent crude, a global oil benchmark, and West Texas Intermediate (WTI), a U.S. benchmark, started to break down in 2011. That's about the same time that shale oil production started to take off.

Part of the problem is that U.S. producers have only limited access to international markets because of export restrictions. Complicating things further, shale oil production disrupted the normal flow of oil in the domestic market. That left some areas with more oil than they could use and created price discrepancies within the U.S. market, as well.

But, because the global oil market has held up relatively well price-wise, U.S. oil had been propped up to some degree. And, thus, drilling for oil in U.S. shale regions remained a very profitable endeavor. In fact the price of WTI Crude had been in an upswing. But not anymore... so now what? 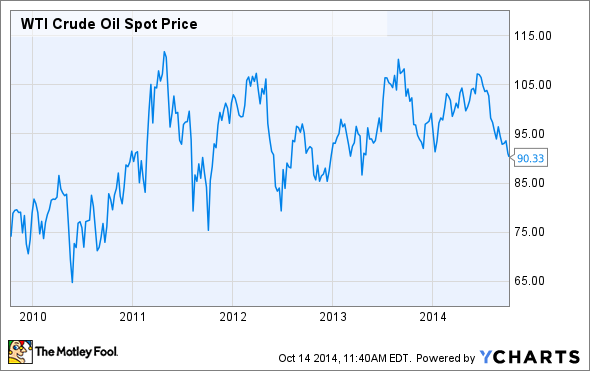 Is gas the leading indicator?
This is a notable problem if you take a look at what domestic energy companies are doing. For example, Newfield Exploration (NFX) has spent the last few years rejiggering its production profile. While a big portion of its effort was exiting foreign operations, a stated goal has been to increase its oil production -- a trend that's expected to continue over the next two years, with natural gas falling to around 35% of production in 2016. In 2008 natural gas was nearly 70% of production, so the company is basically looking to make a nearly 180 degree turn on the production front.

Why did Newfield Exploration switch gears? The price of natural gas, which was particularly high in 2008 fell to historical lows in 2012. The driller essentially shifted to the more profitable option. It's a trend happening throughout the industry. The clearest example comes from the U.S. Energy Information Administration: Between 2008 and 2012 the number of drill rigs looking for natural gas fell from 1,490 to 560. Over that same span oil rigs increased from 380 to nearly 1,360. 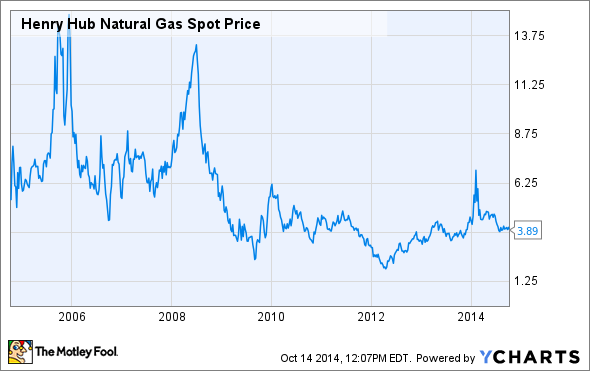 How big is the risk?
The cost to drill in shale formations varies greatly depending on the location. For example, Maria van der Hoeven, head of the International Energy Agency, recently told Reuters, "Some 98 percent of crude oil and condensates from the United States have a breakeven price of below $80 and 82 percent had a breakeven price of $60 or lower."

That suggests that production isn't going to fall off a cliff, but around 20% of U.S. oil production starts to look less desirable as oil falls below $80 a barrel. With oil in the mid $80s, down from around $115 earlier in the year, it might be time to run through your portfolio to get a handle on how much it costs your oil companies to drill.

While all drillers will feel a hit from falling prices, those with higher drilling expenses could actually be forced to stop the bit. That would be eerily similar to what happened on the natural gas side of things as that energy commodity's price tanked. You should prepare now, just in case oil's slide keeps going.