Recent stock market volatility may not be all it's cracked up to be.

Unease is percolating among investors this month. According to Google Trends, from a low in July, the search interest for "stock market crash" this month is getting back to its highest levels of the year. People seem to think a crash could be imminent, too, judging by the search interest for "stock market crash 2014," which is higher in October than it has ever been -- despite the fact that only two-and-a-half months remain in the year. October has historically been a volatile month for stocks, boasting the highest and lowest monthly returns for the S&P 500 Index (^GSPC 0.19%) in the postwar period, according to S&P Capital IQ.

But some investors and pundits aren't that concerned about market history. They're focused on what's happening right now, and they don't like what they see. 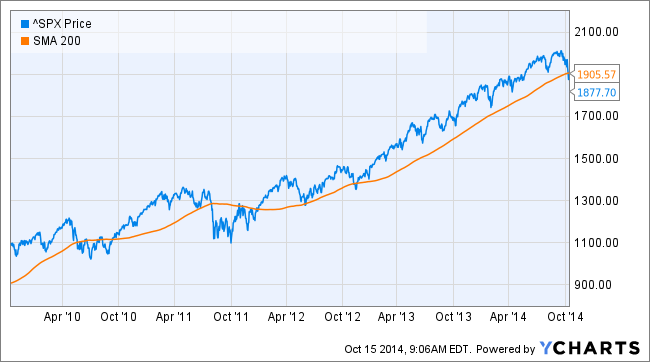 You may already have seen those statistics in the financial press, and they sound rather ominous. However, a bit of context can keep us from being swept up by alarmism (which is excellent for generating clicks and page views but can be extremely damaging to your portfolio).

Stocks have come a long way
Sure, today's decline puts stocks almost 7% below last month's all-time high, but it still leaves the S&P 500 in positive territory for the year. Furthermore, from the market's low in March 2009, we've witnessed a rip-snorting bull market, with the S&P 500 closing in on a triple. Even if the index were to drop 10% tomorrow, it would still be up roughly two-and-a-half times over that period.

It's quite likely that stocks' valuations got a bit ahead of themselves during this run, but, assuming that's the case, a correction isn't something to fear. In fact, fundamentally oriented investors ought to welcome one if it pushes stock market prices closer to their intrinsic value. You may want to retort: "If you know a correction is coming, why not get out of the market to avoid it?" Well, I certainly don't know whether or not a correction or a crash is coming, and you should be wary of anyone who says they do.

Remembering what volatility felt like
What I do know with certainty is that stocks are intrinsically volatile -- they don't call them a risk asset for nothing -- and the market's recent hiccups only seem unusual without the benefit of any historical perspective.

While the current increase in volatility feels a bit jarring, that's only because we may finally be exiting a protracted period of ultra-low volatility. For example, this July saw the end of a 62-day streak during which the S&P 500 failed to record a daily move in excess of 1% either up or down -- the longest such streak since 1995. The volatility we're experiencing now is absolutely normal; it was the lack of volatility that preceded it that was a bit of an aberration.

As far as the VIX goes, stretch out your timescale and you'll find it's not historically far out of whack.

Stocks: A return of the old normal?
Assuming your investing time horizon is consistent with the long-term nature of a stock's claim on company earnings, it's useful to recall Berkshire Hathaway (BRK.B 1.26%) CEO Warren Buffett's aphorism that "unless you can watch your stock holding decline by 50% without becoming panic-stricken, you should not be in the stock market." By that standard, this month's stock market gyrations don't even deserve a raised eyebrow, much less genuine concern. Is a market meltdown possible this year? Of course it is. Is it likely? I don't think so. In any event, more than heralding a stock market crash, recent market action represents a return to some semblance of normalcy.