Will Google’s ambitious efforts to turn Chromebooks into enterprise devices pay off?

Google is making it clear that Chromebooks, which can cost less than $200, aren't just for students anymore. In its updated service, Google introduces a single sign-on across multiple enterprise services which use the SAML (Security Assertion Markup Language) standard. This feature is useful for companies which don't want to be fully dependent on Google's apps, and allows users to switch quickly between work and personal accounts for BYOD (bring your own device) purposes.

Google's new management console also allows network administrators to install or block certain apps, change network access levels for certain users, customize homepage designs, and even push bookmarks to users' Chromebooks and mobile devices. In a blog post, Google states that Chromebooks' cloud-based infrastructure reduces the IT setup time for a business to "a matter of days," and notes that businesses like Woolworths, Auberge Resorts, and Chapters Health have all equipped their workers with Chromebooks.

Will Chromebooks for Work win over even more enterprise users, especially those in small to mid-sized businesses? If so, what would that mean for Google's rivals, Microsoft (MSFT -2.12%) and Apple (AAPL -1.54%)?

Why Chromebooks for Work will hurt Microsoft
In addition to reducing the amount of time and money required to set up a workplace network, Google is gunning for Microsoft by letting Chromebook users run Windows apps in a virtual environment. Google's two primary partners in this effort, known as virtualization, are VMware (NYSE: VMW) and Citrix (NASDAQ: CTXS). 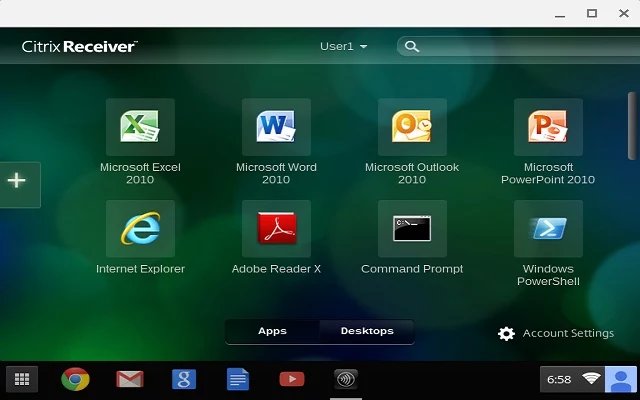 Virtualization can help big businesses make the transition from older Windows systems to Chromebooks while retaining access to their legacy systems. This threat of cheap Chromebooks replacing Windows laptops in businesses forced Microsoft and its partners to develop extremely cheap Windows 8.1 laptops, like the $200 HP Stream, which are natively compatible with older systems. In other words, Google is trying to wean enterprise users off Windows with Chromebooks for Work, while Microsoft is trying to retain them with Office 365, a similar cloud-based platform which also starts at $50 annually per user for small businesses.

Google's other strategy is to take over the cloud office market, which is split between two main players -- Google Apps for Business and Microsoft's Office 365. Last year, 50 million enterprise users used cloud office products, but that number only accounted for 8% of all office software users, according to Gartner. Gartner expects that percentage to rise to 33% by 2017 and 60% by 2022.

A recent survey by the Cloud Alliance for Google Apps and Frost & Sullivan found that 58% of polled administrators planned to "cut support or slow the use of" Microsoft Office. Gartner's figures confirm that trend -- Google Apps' market share surged from 10% in 2007 to 33%-50% in 2012. Therefore, the rise of Google Chromebooks in businesses could hurt both Microsoft's Windows and Office businesses, which accounted for nearly half of its revenue in fiscal 2014, at the same time.

The challenges ahead
Google's expansion into enterprise, however, also faces two key challenges.

First, Apple signed an enterprise partnership with IBM (IBM 0.71%) in July. That deal gave Apple a foothold in enterprise, and provided IBM with a consumer-facing presence which it has lacked since selling its PC business to Lenovo in 2004. Apple and IBM will offer a jointly maintained cloud platform for mobile enterprise users, which provides Apple with custom IBM cloud apps for iOS devices, tech support, and mobile management tools. This platform could help iPads displace Chromebooks and Windows laptops in businesses. Moreover, the alliance could seriously undermine Android as a viable mobile enterprise platform.

The second problem with Chromebooks is security, often considered the main bottleneck for cloud-based enterprise solutions. Google has been proactive on this front, offering bounties through its Chrome Reward program to expose security flaws, but Chromebooks simply aren't immune to security threats. Malicious browser extensions can hijack Chrome OS, and there are still concerns that outside parties, like the NSA, could access Google's Cloud-based storage and location-based services.

The Foolish bottom line
Google Chromebooks for Work is another brick in the company's enterprise wall, which also includes the recent launch of Android apps for Chromebooks, its "Glass at Work" effort with Google Glass, and the addition of Adobe's Creative Cloud applications to the platform.

Google's vision for Chromebooks is clear -- it wants the affordable devices to straddle the consumer and enterprise markets and tether users from both ends to its cloud-based ecosystem. Microsoft should be worried about Google's slow creep across both markets, although it can take some comfort in knowing that Apple and IBM could eventually keep its growth in check.