Please ensure Javascript is enabled for purposes of website accessibility
Log In Help Join The Motley Fool
Free Article Join Over 1 Million Premium Members And Get More In-Depth Stock Guidance and Research
By Justin Loiseau - Oct 16, 2014 at 11:26AM

Every dividend stock has a secret.

Duke Energy Corp (DUK 0.45%) has consistently outperformed its competitors over the past half-decade. But what goes up doesn't always keep going up, and this dividend stock is no exception. Here are three reasons Duke Energy Corp's stock could fall.

1. Priced for perfection?
Duke Energy Corp is one the biggest utilities around. Its stalwart status has earned it immense investor respect. But while that bodes well for business, it also means Duke's stock is priced for perfection.

Duke's price-to-earnings (P/E ratio) of 25 and price-to-sales ratio of 2.14 both put it in the top 20% of most expensive electric utilities stocks. Its 9.2 price-to-cash flow ratio also puts its price above average for utilities.

Duke Energy Corp's price has steadily outperformed the Dow Jones U.S. Utilities Index, snagging a 14 percentage point lead in the past five years. And while that might just mean Duke's a better buy than the rest of its cohort, it's important to remember that negative events can easily affect an entire industry -- and Duke has further to fall than its followers. 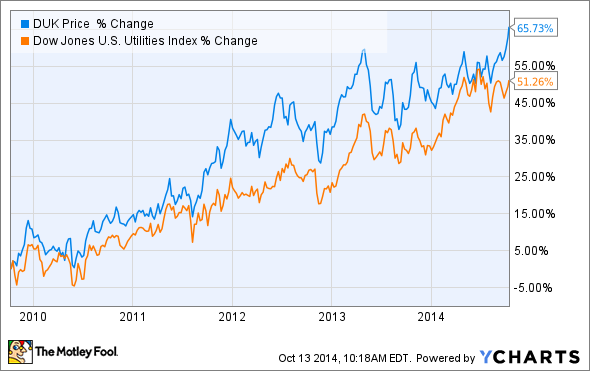 2. Junk doesn't sell (for much)
In February, Duke Energy Corp announced its intentions to exit the merchant generation business. While that might mean stronger and steadier earnings down the road, investors will have to wait at least a couple years to see the benefits.

Duke announced in August that it will sell its Midwest Commercial Generation Business to Dynegy (NYSE: DYN) for $2.8 billion, scratching 11 coal, oil, and natural gas power plants off its assets list. But with a $1.4 billion impairment on its 2014 books, Duke let investors know that it doesn't expect the deal to break even until 2016.

Source: Duke Energy Corp; Miami Fort Station, one of the 11 plants on the sell list .

3. Utilities ain't what they used to be
Utilities are not the power provider powerhouses they used to be. The days of steady earnings and a foolproof business model are over. Decentralized generation, energy efficiency, and a floundering domestic manufacturing economy are altering the way America engages with electricity -- and utilities may be on the chopping block.

It's not Duke Energy's fault, but the backbone of its business may disappear. The touted 84% of its earnings that originate from its regulated utilities is, in some ways, synonymous with evergreen earnings. But regulation just means a guaranteed return-on-equity rate. If these new economic forces cut power consumption, Duke will be guaranteed a return on ... nothing.

Duke is doing things to make sure this doesn't happen. And in some regards, it's well ahead of the industry. It's moving ahead with grid modernization, building up its renewables portfolio, and allowing some customers to sell their excess solar power back into Duke's grid.

But Duke is one pawn in a larger power industry, and it can only adapt so fast. Duke's stock may stumble -- it may soar. But investors should always remember to review the big picture, regardless of any individual company's innovation.